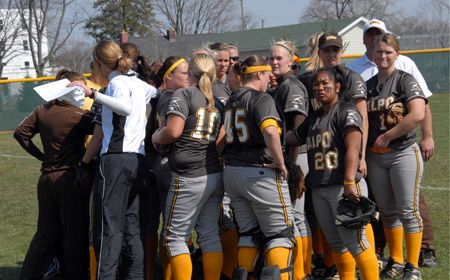 The Crusaders will now play a single game at Butler on Wednesday and a doubleheader on Thursday. (Ray Acevedo)
Related Links

Setting the Scene: A busy schedule gets a bit calmer for Valparaiso this week, as the Crusaders have just one three-game series, a mid-week set in Indianapolis against Horizon League rival Butler that provides an opportunity for Valpo to move up the Horizon League standings.  The series has been adjusted to allow time for the field to dry from recent rains, as Valpo and Butler will now play one game Wednesday before a doubleheader on Thursday.

Series Histories: Valparaiso owns a 16-10 advantage in the all-time series over the Bulldogs, including a pair of wins last season in the Crusaders’ inaugural year of Horizon League play.  The Crusaders took the opener on April 22 at the VU Softball Field, 2-0, as Andrea Zappia twirled a one-hit shutout with eight strikeouts.  Shannon Robinson scored the only run Valpo would need in the bottom of the first, while Courtney LaFerle knocked in an insurance tally in the fifth.
The nightcap went Valpo’s way as well by the same score, as Stephanie Kelly and Zappia combined on a two-hitter.  LaFerle came up with the big hit in the win, delivering a two-run single to score Robinson and Aubrey Sundling with the game’s only runs.

Previously in Valpo Softball: Valparaiso split a pair of doubleheaders last week.  The Crusaders kicked off the week with a home twinbill against Big Ten foe Purdue, dropping the opener 7-1 before winning the nightcap 3-2 on a walk-off single by Whitney Warner.  The win over the Boilermakers improved Valpo’s record against Purdue to 5-4-1 since Randy Schneider’s arrival.  Valpo then traveled to Green Bay, falling in nine innings, 6-5, before rallying for a 3-0 victory in the second game.  The final game of the series was rained out and will not be made up.

Following the Crusaders: WVUR will not be broadcasting any of the series at Butler.  Live stats for all three of this week’s contests will be available through the official Crusader website at www.valpoathletics.com.

The Fight for Position: Valparaiso finds itself in fifth place in the Horizon League standings with two series of league play left, but has a golden opportunity to move up the league standings this weekend, as the top four teams in the league play three series against each other this coming week.  The Crusaders are just two games out of the third spot in the standings, a key position as the top three finishers only have to play one game on the first day of the Horizon League Championship.

Keep On Crossing the Plate: This year’s incarnation of the Crusaders has been Schneider’s most proficient at scoring runs to date.  The 2007 squad, which was the highest-scoring team in Schneider’s tenure, averaged 4.39 runs/game, but this year’s team is averaging 5.15 runs/game.  The 2009 squad has already scored 206 runs this year, third in a single-season in Crusader history and just five runs behind the 1987 team’s mark of 211 runs.

Thievery Abounds: The Crusaders earned an NCAA statistical plaque in 2008, leading all of Division I softball with an average of 2.57 stolen bases/game, and this year’s squad has been even more aggressive on the basepaths.  The Crusaders are averaging 2.83 steals/contest, second in the nation behind only Alabama.  Their 113 total steals are already second-most in a single campaign in program history, while Karen Korb and Sara Strickland both already rank in the individual single-season top-five in the category.  Korb also ranks ninth nationally with 0.73 steals/game after finishing 15th in the category as a junior.

Korb Sets Records: Senior Karen Korb is making her mark on the Crusader record book yet again this year.  Korb scored three runs in Valpo’s four games last week, giving her 93 career tallies, tied with Gina Rhoda for the most in Crusader history.  She also stole her 29th base of the season against the Phoenix, matching her own single-season record from last year.  Korb also owns the second-most runs in a single season all time with 33 runs scored this year, behind only Strickland.

Conner Stepping Up in League: Sophomore Sadie Conner has become one of the Crusaders’ most potent threats at the plate during Horizon League action.  The first baseman is hitting a team-best .395 (15-of-38) during league play with nine runs scored and eight RBIs.  She also has hit for power, registering five doubles as well as two home runs, propeling her to a team-best .684 slugging percentage within the league.

Strickland’s Sensational Freshman Year: Freshman Sara Strickland is putting together a remarkable rookie campaign.  She currently leads the Crusaders with a .372 batting average, good for fourth in the league, and 37 runs scored, tops in the Horizon League and already a Valpo single-season record.  She also finds herself third in the league with 23 stolen bases, third-most in a single year in Crusader history, and second in the league with 12 doubles, tied for fourth-most in one year all-time at Valpo.  Strickland is also among the top-ten in the league in on-base pct., slugging pct., hits, total bases and walks.

Standout Pitching Performances: Senior Stephanie Kelly and freshman Sam McGee each put together stellar games in the circle last week for the Crusaders.  Kelly took down Big Ten foe Purdue with a complete-game five-hitter, allowing just two runs, while McGee shut out Green Bay in the nightcap on Saturday, allowing just five hits while striking out six.  On the year, Kelly ranks third in the Horizon League with a 2.43 ERA, while McGee is fifth in the league with nine wins.

Quickly: Jordan Rutkowski is on a six-game hitting streak, raising her average 26 points in the process ... Rutkowski hit her first career home run against Purdue and added another long ball at Green Bay ... Whitney Warner picked up a walk-off single, scoring Aubrey Sundling, as the Crusaders defeated Purdue ... Valpo players registered nine multi-hit games in the doubleheader against the Phoenix, with Conner, Korb and Rutkowski each having two two-hit games.