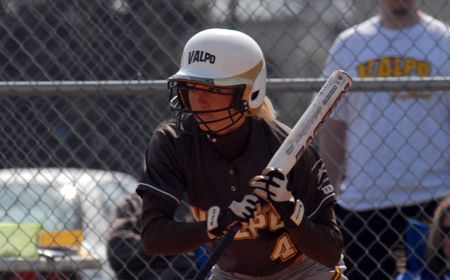 For the third time this season and the fourth time in her career, Valparaiso senior outfielder Karen Korb (Indianapolis, Ind./Lutheran) has been honored by the Horizon League as its U.S. Army Female Scholar-Athlete of the Week.

Korb hit .417 last week in three games for the Crusaders, the second straight week she has hit better than .400 out of the leadoff spot.  The senior successfully stole a base in all three games against Butler, giving her 32 stolen bases on the season, breaking her own single-season record in the process.  She also set a new standard for runs scored in a career last week against the Bulldogs and now has crossed the plate 96 times in her career.  Korb has scored 36 runs this season alone, second-most in a single season in Valpo history.

In the classroom, Korb maintains a 3.94 GPA as a double major in finance and marketing.  Earlier this month, she was named the recipient of Valpo’s Laurel Award, presented to the Crusader senior student-athlete with the highest cumulative GPA.  A two-time CoSIDA Academic All-District V honoree and a three-time NFCA Scholar-Athlete, Korb has earned Valpo Presidential academic honors each of her three seasons of eligibility and has been on the Horizon League Academic Honor Roll each of Valpo’s first three semesters in the league.