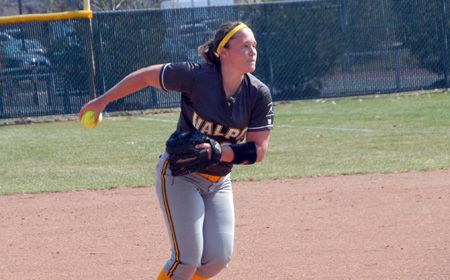 Valparaiso scored in four of its five at-bats Friday morning, eventually downing Youngstown State by run rule, 10-2, in five innings in loser’s bracket action at the Horizon League Championships in Pendleton, Ind.  With the win, the Crusaders stay alive in the double-elimination tournament and move on to face Loyola at 3 p.m. CDT.

“I was really proud of our kids, coming back after a tough loss yesterday,” said Crusader assistant coach Scott Goodwin.  “Alex really did a great job in the circle for us today, and we also hit the ball well and made some key plays in the field.”

Youngstown State got out to the early lead, as Jordan Ingalls registered a two-out RBI single in the top of the first to plate Haley Thomas.  But Valpo responded immediately in its half of the frame.  Korb got hit by a pitch to lead off the inning, while Sara Strickland (Phoenix, Ariz./Horizon) followed with a double to put two runners in scoring position.  Sadie Conner (Washington, Ill./Washington) brought Korb home with a sacrifice fly, while Joylyn Ichiyama (Torrance, Calif./Redondo Union) blooped a double into left field to score Strickland.

The Crusaders added two more runs in the second, as Alex Lagesse (Beecher, Ill./Beecher) lined a single up the middle to put herself on base for Jill Jacobson (Beecher, Ill./Beecher), who launched her third home run of the season to right-center field to increase the lead to 4-1.  The seniors added to the lead in the fourth, as Korb hit an opposite field solo homer prior to Wolter’s two-run shot.

The Penguins cut into the lead slightly in the fifth, as a Kim Klonowski double scored Thomas.  But Lagesse pitched out of a bases loaded, one out jam later in the frame, as she induced a lineout back to the circle and a groundout to second to keep the lead at 7-2.  The Crusaders would then end the game in the bottom of the inning, as Jacobson plated pinch-runner Jamie Weinburger (Eagle River, Alaska/Eagle River) with an RBI double, while fellow pinch-runner Aubrey Sundling (Huntington, Ind./Huntington North) scored on an illegal pitch.  YSU then intentionally walked the bases loaded with one out to set up a force at every base, but Jacobson beat the throw home on a grounder by Wolter to end the game.

Jacobson, Strickland and Wolter each registered two-hit days for the Crusaders, who picked up ten total hits in the five innings, including six of the extra-base variety.  Lagesse earned the complete-game victory in the circle, scattering eight hits but holding YSU to 2-of-14 with runners in scoring position to improve to 5-5 on the season.  Cheryl Cale took the loss for Youngstown State (8-42), falling to 7-24 on the year after giving up seven runs in her 3.2 innings of work.

Sixth-seeded Valparaiso (25-23) advances in the loser’s bracket to face fourth-seeded Loyola at 3 p.m. CDT Friday.  The Crusaders went 1-2 against the Ramblers this year in Chicago, including a 15-inning victory in the series opener.