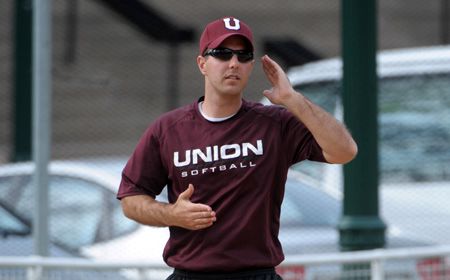 Valparaiso University director of athletics Mark LaBarbera announced today that Jordan Stevens has been named as the new head coach of the Crusader softball program.

“We are very excited to be having Coach Stevens joining our staff,” said LaBarbera.  “He has coached championship teams at a number of levels, has a passion for softball, and a strong commitment to private higher education.  After a national search, Coach Stevens was a clear choice to lead our softball program's continued progress toward a Horizon League championship and an NCAA post-season berth.”

“I’d like to thank President Heckler, Mark LaBarbera, Jenn Samble and the members of the search committee for allowing me the opportunity to come to Valparaiso,” said Stevens.  “I’m looking forward to working with a group of dedicated softball student-athletes at a school where academics and athletics are both truly valued.”

Stevens comes to Valpo after spending the 2010 season as head coach at Division III Union (N.Y.) College, leading the Dutchwomen to the most successful season in program history.  He guided Union to a school-record tying 32 victories last year en route to its first Liberty League regular season title since 2005.  The Dutchwomen went on to win their first-ever Liberty League Tournament championship, qualified for the ECAC Division III Upstate Championship as the top overall seed and won that title as well.

Under Stevens’ guidance, Union rose as high as #5 in the NFCA regional rankings in 2010.  He coached the Liberty League Co-Pitcher of the Year, as well as six total All-League recipients.  Stevens and his staff were also named the league’s Coaching Staff of the Year as they guided the Dutchwomen to the top spot in the league in both team batting average (.333) and team ERA (2.15).

Prior to arriving at Union, Stevens spent a year as assistant coach at the University of Rhode Island.  While with the Rams in 2009, he was directly responsible for the development and coaching of the pitching staff, helping to lower the squad’s team ERA by 1.72 runs and reduce opponents’ batting average by 40 points.

Previously, Stevens served two seasons as an assistant coach at Niagara University, where he was responsible for development and individual instruction in hitting.  He helped lead the Purple Eagles to single-season school records for batting average, hits and home runs, the latter of which was the second-highest single season mark in MAAC history.  He helped guide Niagara to the winningest season in school history in 2008, coaching the conference Co-Player of the Year along the way.  Niagara also finished among the top-20 teams nationally in doubles (2007), home runs (2008) and slugging percentage (2008) during his tenure.

From 2004 to 2006, Stevens was the head varsity softball coach at Notre Dame Academy in Toledo, Ohio.  He helped the Eagles win two sectional championships, make two district final appearances and win back-to-back Toledo City League titles in 2004 and 2005.  Stevens was named the league’s Coach of the Year in 2004 and 2005 and was honored as the Northwest Ohio Division I Coach of the Year in 2005 as well.  Along the way, he coached 17 All-League athletes, 10 All-District honorees and two All-State recipients.

Stevens graduated from Bowling Green State University in 2004 with his bachelor’s degree as a sports management major.  He is currently a member of the National Fastpitch Coaches Association (NFCA).