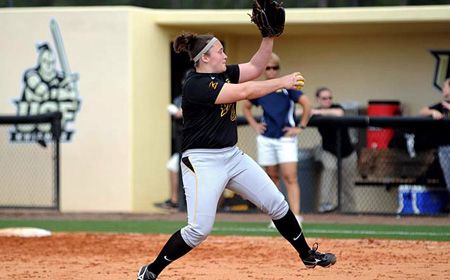 Junior Alex Lagesse (Beecher, Ill./Beecher) threw a perfect game, retiring all 15 batters she faced, in the Horizon League opener Saturday against Detroit as Valparaiso won 8-0 in five innings.  The Crusaders then captured the nightcap in five innings as well by a 10-0 score for their tenth straight victory, a new program record for longest winning streak.

Lagesse registered eight of her 15 outs in the perfect game via strikeout and had no hitter even hit the ball into the outfield after the first inning.  Her 65-pitch gem was her second career no-hitter, as Lagesse also no-hit Bryant as a freshman on March 9, 2009. It also marks just the Crusaders' third no-hitter in the last nine years, and is the first no-no at the Valparaiso University Softball Field since Stephanie Kelly and Carrie Franson combined for a five-inning no-hitter against IPFW on April 16, 2007.

“Alex got better as the game went on today, which was nice to see,” said Crusader head coach Jordan Stevens.  “I don't think she was as sharp as she wanted to be in the first inning, but she progressively got better.  By the time she got rolling, she was throwing the ball very, very well.  Obviously, a perfect game is pretty special, and it was good to see her pitch so well to earn it today.”

It looked for most of the game that Lagesse would have to carry the perfect game deeper than just five innings, as Valpo put just two runs on the board in the first four innings.  Freshman Angie Doerffler (Fort Wayne, Ind./Concordia Lutheran) reached on a fielder's choice in the first and eventually scored on an RBI single back up the middle by junior Jordan Rutkowski (Alden, N.Y./Alden).  Then in the fourth, senior Sadie Conner (Washington, Ill./Washington) and junior Kelsey Phalen (Batavia, Ill./Batavia) registered back-to-back two-out doubles, plating the former with the game's second run.

The score was still 2-0 starting the bottom of the fifth, where freshman Amanda Wisniewski (Lake in the Hills, Ill./Huntley) led off with a solo homer to right field.  Later in the frame, with two on and one out, senior KC Boldt (Red Wing, Minn./Red Wing) connected on a double just to the right of center field, scoring sophomore Hayley Bridwell (Lemont, Ill./Lemont).  Rutkowski followed by driving Doerffler in for the second time on the game to make it 5-0.

An infield single by Conner brought home Boldt to increase the lead to six runs and put runners on the corners for Phalen, who delivered her second double of the game to score Rutkowski.  Needing just one more run for the run-rule win, Wisniewski stepped up two batters later for the second time in the inning and knocked a single back up the middle to score Conner with the game's final run.

Lagesse improved to 5-5 with the perfect game in the opener, while Detroit's Karyn McCarty took the complete-game loss, falling to 2-3.  Five different Crusaders had multi-hit games as Valpo picked up 11 hits as a team in the opener.

The second game started the same way as the first for the Crusaders, as they hit the board in their first time at-bat.  Doerffler was on third and junior Sara Strickland (Scottsdale, Ariz./Horizon) on second with one out in the first and Boldt up to the plate.  Boldt hit a grounder to second and the play came to the plate, where Doerffler beat the throw for the game's first run.  The throw then got away from the Titans' catcher, allowing Strickland to scoot home as well on the same play to give Valpo an early 2-0 edge.

The Crusaders quickly added to their lead with four runs in the second, as Strickland and Boldt delivered consecutive two-RBI singles to increase the edge to 6-0.  Then Boldt stepped up to the plate with the bases loaded and two outs in the third and connected on a shot, drilling a no-doubt grand slam to straightaway center field to cap the Crusader scoring.  The grand slam closed a career-high seven-RBI game for Boldt, the most in a single game by any Valpo player since at least 1999.

“KC's in that position in the lineup [cleanup] for a reason,” said Stevens.  “We believe she can produce for us, and she's been put in a lot of situations lately with runners in scoring position.  We have confidence in her ability to drive runners in, and she's been swinging the bat well and driving those runners in.”

The pair of wins gives Valparaiso (17-10, 2-0 Horizon) ten straight victories, as the Crusaders have not lost since their first game on March 8.  The first win Saturday matched the program record of nine straight wins, accomplished twice previously, while the nightcap victory secured the new record.  Valpo looks to add to the record in the series finale Sunday afternoon, as the Crusaders and Titans face off at noon.  Live stats for tomorrow's game can be found at www.valpoathletics.com.

“What we've done during this winning streak is to stay focused,” said Stevens.  “We don't look ahead, and don't care about what happened the day before.  Every day is a new day for us, and when we have that kind of focus, it allows us to stay consistent.  We feel if we're able to stay consistent, good things will happen, and they have been recently.  We're playing really well, and now we need to go get another one tomorrow."