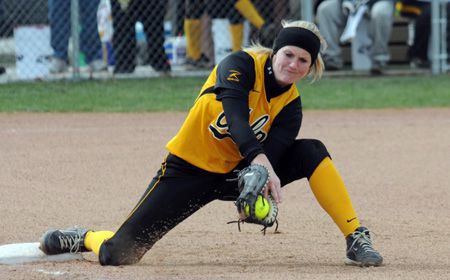 Previously: Valpo went just 1-3-1 in its five games last week.  The Crusaders dropped the opener of a twinbill against Purdue, 8-2, before earning a 4-4 tie in the nightcap, called after five innings due to darkness.  Valpo then split a pair of extra-inning contests at Loyola on Saturday, winning 5-2 in nine and losing 5-4 in eight, before falling in the series finale on Sunday.

Series Notes: Butler - The Crusaders hold an 18-13 advantage in the all-time series against the Bulldogs, including a 4-3 edge since joining the Horizon League.  Last year, the two teams split a doubleheader in Valparaiso, both games decided by 3-0 scores.  Sadie Conner hit a three-run homer in the opener for the final margin, while Alex Lagesse gave up just one unearned run in 9.1 innings, giving her a perfect ERA through 11.1 career innings against the Bulldogs.
Youngstown State - Valpo is a commanding 17-5 all-time against the Penguins, including a 9-1 mark since the Crusaders joined the HL.  The Crusaders swept a three-game set from YSU last year in Valparaiso by scores of 8-0, 4-1 and 9-8 (8 innings).  Sam McGee owns a 3-0 career mark and a 0.84 ERA in 16.2 career innings against YSU, while Sara Strickland has dominated at the plate versus the Penguins, going 15-of-22 (.682) with 16 runs scored in seven career games.

Lots of Road Games: Starting with the Loyola series this past weekend, the Crusaders are scheduled to play nine straight road games, a rarity in program history.  The last time Valpo had at least nine consecutive games away from home (post-spring break trip) was 1997, a stretch of 11 straight games April 2-13 which included five games at a tournament hosted by NIU.  In fact, the nine straight true road games the Crusaders are scheduled to play would be the longest consecutive stretch of away games Valpo has played in program history.

Fit to be Tied: For the first time in six seasons, Valpo had a game end in a tie, as last Thursday’s second contest against Purdue at the VU Softball Field was called after five innings tied 4-4 due to darkness.  Coincidentally enough, the last time the Crusaders had a game called a tie was also against Purdue in Valpo, a 4-4, nine-inning tie on April 19, 2005.  The only other previous tie came on Mar. 26, 1986 against DePaul, a 0-0, six-inning game that actually ended as a double no-hitter.

Playing Extras: It was only appropriate that the site of the longest site of Valpo’s longest game in program history (Loyola Softball Park) hosted back-to-back extra-inning games to kick off the Crusaders’ three-game league set against the Ramblers this past weekend.  For Valpo, which won the opener in nine before falling in eight in the nightcap, it was the first time playing multiple extra-inning games in the same day since Mar. 24, 2008, when both ends of a twinbill against Ball State went extras.

Lucky 13: Valparaiso’s winning streak finally came to an end in the opening game of a doubleheader April 2 against UIC, snapping the Crusaders’ string of consecutive wins at 13.  Valpo, which had not lost since a March 8 affair against South Dakota, easily surpassed the previous program record of nine straight victories, accomplished twice.

A Rigorous Slate: The Crusaders had a number of challenges on their hands in the pre-league portion of the 2011 season.  11 of Valpo’s first 13 games were against squads which won at least 30 games a year ago, with six of those games were against teams which advanced to the NCAA Tournament in 2010 as well.  Valpo also took on a pair of the nation’s top-10 teams for the first time ever.  The tough competition continues in Horizon League play, as three other league squads won at least 30 games in 2010.

Run-Ruling All Comers: Valparaiso won 12 games via run rule last season, and has already run-ruled six opponents in its 22 victories this season, including an 11-2, five-inning win over Iowa State, the Crusaders’ first run-ruling of a BCS opponent in the modern era.  On the flip side, Valpo has lost just two games by run rule so far this year.

Home Field Advantage: Through nine of 17 scheduled home games at the Valparaiso University Softball Field, the Crusaders own a 5-3-1 record, including the program’s first ever victory over Michigan State and a tie with Purdue.  The Spartans and Boilermakers are two of three BCS programs Valpo will host this season, as DePaul is scheduled to come to town later this year.

Raking in League Honors: While Lagesse wasn’t quite perfect in her other two outings that week, she ended the week with a perfect 3-0 record and a 0.47 ERA in her three starts, surrendering just five hits while striking out 15 in 15.0 innings of work to earn Horizon League Pitcher of the Week honors on March 28.  The honor was Lagesse’s fifth career weekly accolade from the league office, tied for fifth-most by a pitcher in league history.  The junior also became the second Crusader to earn a league weekly award this year, joining Jessie Marinec, who was named Batter of the Week on February 28.

Strickland Sets More Records: Junior Sara Strickland, who had already broken Valpo’s career runs scored record earlier this year, snapped a three-way tie atop the total bases chart with a double in the nightcap against Purdue last Thursday.  With the two-bagger, Strickland is now just one double away from matching Shannon Robinson’s career mark of 39.  The junior is also just 11 hits shy of Robinson’s record of 182, and trails Karen Ingram on the career walks chart by just nine free passes.  Strickland currently leads the Horizon League in hits (47) and doubles (10) this year and ranks among the top-five in three other categories.

Rutkowski Record-Breaking Too?: Junior Jordan Rutkowski drove in two more runs last week, giving her 88 career RBIs, tied with Gina Rhoda for second-most in program history.  Rutkowski now trails Ashley Wolter’s career record of 92 by just four RBIs, despite having more than a full season left to play.  Rutkowski also is currently tied with Strickland with 61 career walks in a race for that career record.

The Hits Kept on Coming: When freshman Angie Doerffler knocked a single into right field in the fifth inning of a win over Temple on Mar. 9, little did she or anyone else know that would be the start of a streak that would land her a place in the NCAA record book.  Starting with that hit, over the next four games and 13 days, Doerffler registered hits in nine consecutive official at-bats before flying out in the fourth inning of the opener at IUPUI Mar. 22.  Her nine straight hits is tied for ninth-most in NCAA Division I history.  She also had a pair of walks during the stretch, reaching base in 11 straight plate appearances.

Boldt Bangs Out Hits: Senior KC Boldt set a Valpo season-best with a 13-game hitting streak from March 22-April 9, a streak which was snapped by an 0-for-4 in the nightcap at Loyola.  Boldt has seen her batting average rise 60 points, up to .310, since the start of the hitting streak and is hitting .375 (18-for-48) with 13 runs scored and 15 RBIs over the Crusaders’ last 15 games.