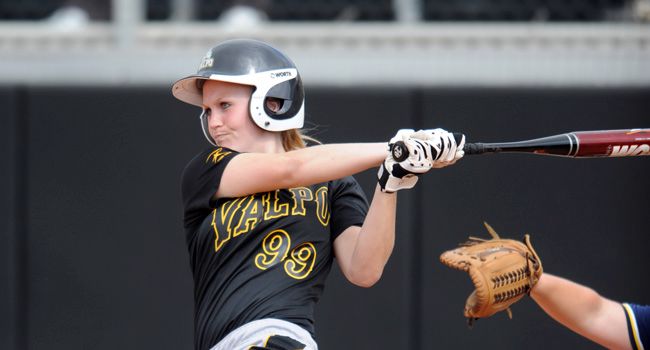 The Valparaiso softball team opened the 2012 season Friday evening, but couldn’t come out of the night with a victory, falling to UNI 6-0 in the opener of the Ramada Inn UNI Dome Tournament in Ames, Iowa.  The tournament was originally scheduled to be hosted by UNI, but the entirety of the tournament has been moved to Iowa State due to equipment failure at the UNI Dome.

“It’s exciting to actually start playing against somebody else, to see some other pitchers and see what you do against another group to start the season,” said Crusader head coach Jordan Stevens.  “Obviously, it wasn't the way we were hoping to open up the year, but it’s always good to get the season going.”

Valpo went down 1-2-3 in each of its first two innings, and the Panthers claimed a 3-0 lead after the bottom of the second.  A Crusader error allowed UNI’s leadoff hitter to reach base, and the Panthers took advantage immediately with an RBI single from Haley Kriener.  Later in the frame, Whitney Plein picked up a two-RBI single to make it 3-0 UNI

Senior Kelsey Phalen (Batavia, Ill./Batavia) drew a walk to lead off the top of the third for Valpo and would eventually advance to third with two outs on an error, but couldn’t complete the journey around the bases.  Phalen also picked up a two-out single in the fifth, Valpo’s first hit, and moved into scoring position thanks to a passed ball, but a strikeout ended that Crusader scoring threat.

UNI (1-0) capped the scoring in its half of the fifth with a two-out, three-run home run by Kriener, who ended the night with four RBIs.  The Crusaders placed two more runners on base, as senior Sara Strickland (Scottsdale, Ariz./Horizon) walked in the sixth and freshman Brittany Duncan (Fairborn, Ohio/Fairborn) singled for her first career hit in the seventh, but neither would cross the plate.

Senior Sam McGee (Bloomington, Minn./Jefferson) got the start in the circle for Valpo and took the loss, going four-plus innings and surrendering four runs, three earned, while striking out three.  Senior Alex Lagesse (Beecher, Ill./Beecher) pitched the final two innings and struck out three while giving up two runs.  Jamie Fisher went the distance for UNI and tallied eight strikeouts in her two-hit effort.

“Two big innings hurt us today, and we kind of allowed them to have one of them thanks to an error,” said Stevens.  “But UNI is a good, solid team.  Their pitcher was spot-on today; she was in midseason form and she took it to us.”

Valparaiso (0-1) continues play at the Ramada Inn UNI Dome Tournament in Ames, Iowa on Saturday with a pair of games.  The Crusaders face Nebraska-Omaha Saturday morning at 10 a.m. before taking on the tournament’s new host, Iowa State, at noon.