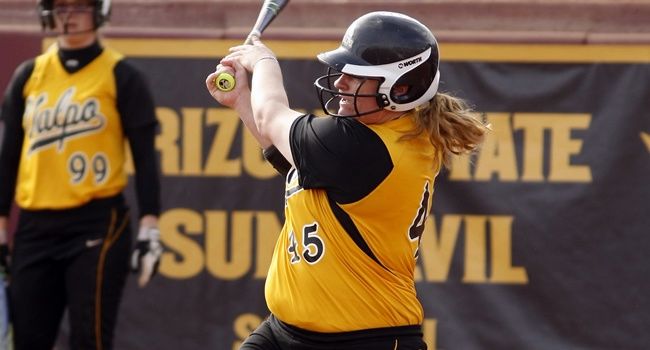 Valparaiso failed to end the Diamond Devil Invitational on a winning note on Sunday morning, losing to East Carolina by a 5-3 score.

“We simply just didn’t play well enough to win,” said Crusader head coach Jordan Stevens.  “There are some lessons to learn from being here, but those lessons didn’t lead to wins.  We competed hard in every game this weekend, but ultimately we have to raise the standards of what is good enough so that we can pull games out.  We will take what we can from this weekend and work this week in practice so we come out ready to go on Friday.”

The Crusaders plated runs in each of the first two innings on Sunday to claim an early 2-0 advantage.  Redshirt sophomore Jessie Marinec (Alsip, Ill./Marist), batting in the two-hole for the first time this season, reached on a fielder’s choice in the opening frame and came around to score on an RBI double from senior Sara Strickland (Scottsdale, Ariz./Horizon).  Freshman Brittany Duncan (Fairborn, Ohio/Fairborn) then connected on a one-out solo homer in the second to give Valpo an early two-run lead.

East Carolina responded with single runs in the third and fourth, scoring the former on an RBI groundout and the latter thanks to a pair of Crusader errors.  ECU then took the lead for good in the fifth on RBI singles by Kristi Oshiro and Priscilla Velasquez, sandwiched around a one-out error that plated Rebecca Lee.  Velasquez’s RBI single made it 5-2 ECU, but the Crusaders avoided further damage as sophomore Amanda Wisniewski (Lake in the Hills, Ill./Huntley) threw out the trailing Pirates’ baserunner at the plate to end the top of the fifth.

As so often happens, Wisniewski led off the bottom of the fifth after her defensive play to end the top half of the frame, and the sophomore led off in style with a solo home run, her fifth round-tripper of the year, to cut the lead to 5-3.  That would be as close as the Crusaders would get, however, as a one-out single by Marinec in the fifth and a pair of baserunners in the sixth went for naught.

Senior Jordan Rutkowski (Alden, N.Y./Alden) led the Crusaders with a pair of hits on Sunday, as six different Valpo players combined for its seven hits.  Senior Alex Lagesse (Beecher, Ill./Beecher) fell to 5-4 in the circle, taking the loss in a complete-game effort despite surrendering just two earned runs.  Reliever Sarah Christian earned the win for East Carolina (10-13), improving to 8-7 after throwing the last four innings.

Valparaiso (11-8) looks to get back on the winning track next weekend as the Crusaders conclude their spring break trip at the San Diego Classic II.  Valpo will kick off the five-game weekend with a pair of games on Friday, taking on CSU Bakersfield at 3 p.m. CDT and San Diego at 9 p.m.