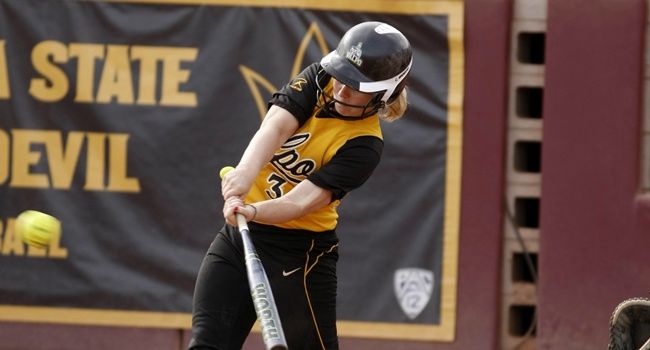 Valparaiso ran its Horizon League record to 8-0 on Wednesday afternoon, sweeping a mid-week doubleheader at Wright State by scores of 4-2 and 10-0 (6 inn.) in Fairborn, Ohio.  Senior Sam McGee (Bloomington, Minn./Jefferson) matched the Crusaders’ career wins record by earning the victory in the nightcap.

The Crusaders fell behind in the opener, as Wright State put the first run of the day on the board in the bottom of the second on a two-out RBI triple.  Valpo would take until the top of the fifth to crack the scoreboard and tie the game.  Sophomore Angie Doerffler (Fort Wayne, Ind./Concordia Lutheran) reached on an infield single with two outs and moved up into scoring position as a walk was issued to senior Sara Strickland (Scottsdale, Ariz./Horizon).  Freshman Brittany Duncan (Fairborn, Ohio/Fairborn) knotted it up with a single through the right side to plate Doerffler with the Crusaders’ first run.

With the seal cracked on their side of the scoreboard, Valpo then added two more runs in the sixth to take the lead for good.  Redshirt sophomore Jessie Marinec (Alsip, Ill./Marist) continued her recent hot hitting with a double into the left-center gap, moving up to third on a flyout before scampering home on a wild pitch to give the Crusaders a 2-1 lead.  Junior Tori Brown (Harrison, Ohio/Harrison) kept the inning alive with a two-out pinch-hit single and came around to score an insurance run as Doerffler and Strickland followed with back-to-back base hits.

The Raiders cut their deficit in half in the bottom of the sixth, scoring an unearned run on a Crusader throwing error, but Valpo would get that run back in the top of the seventh to secure the opening win.  Senior Jordan Rutkowski (Alden, N.Y./Alden) led off the inning with a four-pitch walk, but her attempt to score on a double from redshirt junior Joylyn Ichiyama-Drewry (Torrance, Calif./Redondo Union) was unsuccessful, as Rutkowski was thrown out at the plate.  Ichiyama-Drewry alertly moved up to third on the throw home, however, and pinch-runner Hayley Bridwell (Lemont, Ill./Lemont) came home thanks to a sacrifice fly by senior Kelsey Phalen (Batavia, Ill./Batavia) to close the scoring.

Senior Alex Lagesse (Beecher, Ill./Beecher) tossed the complete-game three-hitter for the Crusaders, giving up no hits in her final five innings of work.  Lagesse gave up just one earned run in her seven innings of work as she improved to 12-6 on the year.  Krystian DeWitt surrendered three runs in 5.2 innings as Wright State’s starter, taking the loss.  The Crusaders boasted a 12-hit attack in the opener, as Doerffler, Ichiyama-Drewry, Marinec and Strickland all picked up multiple base hits in the first game.

In the nightcap, McGee twirled another gem as she matched Valpo’s career wins record at 50, set by Laura Pajakowski (1986-89), with her 10th win of the 2012 campaign (10-2).  The senior scattered five hits in a complete-game victory on Wednesday, walking none and striking out four.  She has now given up no earned runs in her last four outings and has tossed three consecutive shutouts.

“Both Sam and Alex are just in total control right now,” said Crusader head coach Jordan Stevens.  “It’s really a credit to both of them how they consistently continue to hit their spots, continue to make hitters guess, and have command of all their pitches.”

Offensively, it took Valpo until the fourth inning to get on the board in the day’s second game, when it broke through for three runs.  Back-to-back one-out singles by Strickland and Duncan put two in scoring position, and the bases were loaded up after the Raiders issued an intentional walk to Rutkowski.  Ichiyama-Drewry brought home the game’s first run with a sacrifice fly, while an RBI double from Phalen plated pinch-runner Amanda Korb (Indianapolis, Ind./Lutheran).  A Wright State error allowed Rutkowski to score as well, giving Valpo a 3-0 lead halfway through the game.

The heart of the order set up the Crusaders’ next run as well in the fifth, as Strickland reached on catcher’s interference with one away and Duncan followed with a double.  Again, the Raiders walked Rutkowski to load the bases and set up a force at any bag, and again Ichiyama-Drewry followed with an RBI.  The redshirt junior grounded one to second base, but the Raiders’ only play was to force Rutkowski as Strickland scored to make it 4-0 Valpo.

The Crusaders then put away the run-rule victory with a six-spot in the sixth inning.  Consecutive singles by Marinec and sophomore Amanda Wisniewski (Lake in the Hills, Ill./Huntley) opened the inning, and Valpo loaded the bases when the Raiders committed an error on Brown’s sacrifice attempt.  A fielder’s choice grounder from Doerffler drove in Marinec for Valpo’s fifth run, and two batters later Duncan drew a four-pitch walk to score Wisniewski and make it 6-0.  With nowhere to put Rutkowski with an intentional walk, WSU was forced to pitch to the Crusader catcher, and the senior made them pay with a grand slam on a full-count pitch to cap the scoring, her second grand slam of the year.  The home run also was her 12th of the 2012 season, breaking her tie with KC Boldt’s 2011 season atop Valpo’s single-season chart.

DeWitt took her second loss of the afternoon for Wright State (17-22, 5-6 Horizon), falling to 11-19 on the year as she gave up all 10 runs in 5.1 innings.  Duncan and Marinec each had two hits in the nightcap for Valpo, the latter registering her seventh multi-hit game in the last 10 outings, while Strickland and Rutkowski each scored two runs.

“Our entire team continued to have quality at-bats today,” said Stevens.  “Even when they weren't working for us early on, our hitters did a nice job of executing at the plate and continuing to work for good at-bats.”

Valparaiso (24-10, 8-0 Horizon) looks to complete its third straight sweep to start Horizon League play on Thursday afternoon, as the Crusaders conclude their series at Wright State with a single game at 2 p.m. CDT.  Live stats will be available through www.valpoathletics.com.