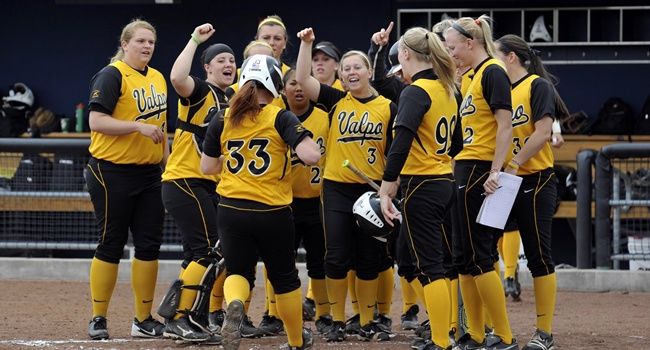 Valparaiso saw its 11-game winning streak come to an end on Wednesday afternoon, as the Crusaders couldn’t overcome an early six-run deficit to a 6-3 loss at Notre Dame.

“We can’t give good teams extra outs if we’re going to expect to come out on top – we have to be able to catch and throw the softball,” said Crusader head coach Jordan Stevens.  “Not doing the little things well cost us today.  Notre Dame is a very good team and you can’t hand a team like that runs.  I did think we swung the bats well today and had good at-bats, but we didn’t do the things we needed to do defensively well enough to win the game.”

The Irish loaded the bases in the first inning on a single, a hit batsman and a walk, the latter two runners reaching with two outs.  Katey Haus then lined an 0-1 pitch into right field to score the first two runs of the game, giving Notre Dame a 2-0 lead after the first inning.

Notre Dame then scored all the runs it would need for the win in the bottom of the second.  The Irish got a leadoff double from Chloe Saganowich, who eventually was on third with two outs.  An infield single from Kelsey Thornton scored Saganowich to make it 3-0, and a solid single into center by Emilee Koerner made it two on.  Amy Buntin stepped in and sent an 0-1 pitch high off the scoreboard beyond the left-center fence to push the Irish lead to 6-0.

The Crusaders, who had tallied a single apiece in each of the first two innings, got on the scoreboard in the top of the third.  Junior Tori Brown (Harrison, Ohio/Harrison) swung at the first pitch she saw in her second at-bat and lined it to left field, where it just cleared the wall for a solo homer to cut the deficit to 6-1.  For Brown, it was her second home run in as many games.

A leadoff single in the fourth went for naught for the Crusaders, but Valpo would add another run on its ledger in the sixth.  Sophomore Angie Doerffler (Fort Wayne, Ind./Concordia Lutheran) led off the inning with a solid first-pitch single back up the middle.  Two batters later, freshman Brittany Duncan (Fairborn, Ohio/Fairborn) lined an 0-2 pitch to the wall in left center field, deep enough to bring around Doerffler to make it 6-2.

Valpo was unable to cut into the Irish lead any more in the sixth despite having the runner on second with one out, as a fly-out and a pop-out ended the threat.  The Crusaders did move to within three runs with two out in the seventh, as sophomore Amanda Wisniewski (Lake in the Hills, Ill./Huntley) launched a solo home run to deep left field, but a pop-out would end the game in the Irish’s favor.

Senior Sam McGee (Bloomington, Minn./Jefferson) took the loss for Valpo, falling to 11-3 after giving up six runs in the start.  Fellow senior Alex Lagesse (Beecher, Ill./Beecher) took over in the circle in the second inning and tossed 4.1 innings of shutout softball, surrendering just two hits and one walk.  Laura Winter earned the complete-game win for Notre Dame (22-13), improving to 15-8.  Duncan and Doerffler each had two-hit efforts to lead the Valpo offense.

“It was a good bounce-back performance for Alex today,” said Stevens.  “She needs to keep that command going into the weekend.”

Valparaiso (28-11) looks to get back on the winning track this weekend with a three-game Horizon League series at UIC.  The series starts with a doubleheader in Chicago on Saturday afternoon at 1 p.m., with live stats and live chat for all three games available at www.valpoathletics.com.