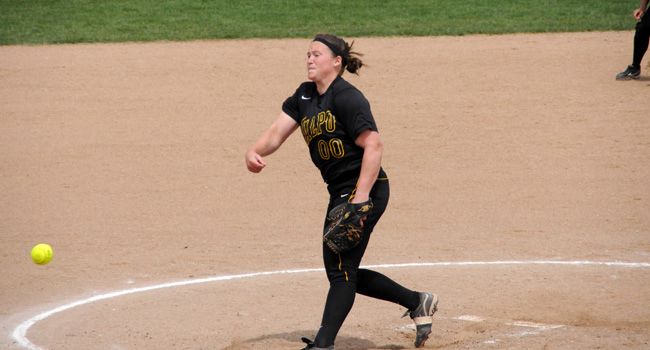 Senior Alex Lagesse (Beecher, Ill./Beecher) struck out a career-high 11 batters in a three-hit gem, while senior Sara Strickland (Scottsdale, Ariz./Horizon) delivered the big blow with a  two-out, two-run double in the fifth as Valparaiso earned a victory on Senior Day at the Valparaiso University Softball Field with a 2-0 win over Loyola.  The win, combined with results later in the afternoon, guaranteed the Crusaders at least a share of the Horizon League regular season title with one weekend of play left, the program’s first-ever league title.

“The real difference today is that we went out there and had fun,” said Crusader head coach Jordan Stevens.  “Offensively, I thought we attacked the strike zone better.  Regardless of the results of the at-bat, I thought we did a better job at the plate.  But the key was that we just had more fun today, and I thought mentally we had a good approach right from the start.”

The winningest class in program history was honored on the field before the game as part of Senior Day ceremonies, as the Crusaders boast seven seniors in their final season with the program: Lagesse, Strickland, Joylyn Ichiyama-Drewry (Torrance, Calif./Redondo Union), Shaleigh Jansen (Ottawa, Ill./Ottawa Township), Sam McGee (Bloomington, Minn./Jefferson), Kelsey Phalen (Batavia, Ill./Batavia) and Jordan Rutkowski (Alden, N.Y./Alden).  The group has won 126 games and counting over their four-year Crusader careers.

“It’s great for the seniors,” said Stevens.  “It’s just always a positive to come out and get a win for them on their senior day.  They’ve done so much for this program already, with still a lot more to go, that it would have been a shame for it to come out any other way today.”

Once the game got underway, Lagesse and her Loyola counterpart, Brittany Gardner, were both dominant early on.  Lagesse gave up just a leadoff single in the second for the Ramblers’ only baserunner in the first five innings, striking out nine over that stretch, including six in a row at one point.  Meanwhile, Gardner set the first eight Crusaders of the game down in order before a walk by sophomore Amanda Wisniewski (Lake in the Hills, Ill./Huntley).  Sophomore Angie Doerffler (Fort Wayne, Ind./Concordia Lutheran) picked up Valpo’s first hit of the game with a single into shallow right to lead off the fourth, but the Crusaders couldn’t advance the runner past first base.

The only runs Lagesse would need as support came in the bottom of the fifth.  The frame started without a hint of what was to come, as the first two batters of the inning went down in order.  Freshman Lindsey Norway (Chicago, Ill./Chicago Christian) swung and missed at the first pitch she saw and then took five straight pitches, four of which were balls, to draw a two-out walk.  Wisniewski then was hit by a pitch to put two on with two out for Strickland, who roped a 1-1 pitch all the way to the wall in left-center field to plate both baserunners and give Valpo a 2-0 lead.

Loyola’s Olivia Bell led off the sixth inning with a single, but Lagesse pitched around it, inducing a pair of fielder’s choice grounders to keep the runner out of scoring position before tallying a strikeout to end the frame.  The Ramblers got a leadoff single in the seventh as well from Annie Korth before Lagesse tallied her career-high 11th K of the game for the first out.  The senior got ahead 0-2 on Lauren Arceneaux before the batter lined out to Jessie Marinec (Alsip, Ill./Marist), who had enough time to go to Phalen at first to double up the pinch-runner for the game-ending double play.

Lagesse improved to 15-8 this season with the complete-game gem, surrendering just three hits and walking none to go along with her 11 strikeouts.  Over the two games she pitched this weekend against the Ramblers, the senior gave up just one earned run in 15 innings and tallied 21 strikeouts.  Gardner took the loss for Loyola (22-21, 13-8 Horizon), falling to 16-9 after going the first five innings.

“It was phenomenal, just a great outing from Alex today,” said Stevens.  “She had good command of her pitches and mixed it up well.  I thought she just had a really good series overall, and she definitely stepped up big for us today.”

Thanks to UIC’s loss in the back end of a twinbill at Youngstown State on Sunday, Valparaiso (32-16, 16-5 Horizon) clinched at least a share of the Horizon League regular season title.  One win in the three-game series at Cleveland State next weekend would clinch an outright championship and the right to host the league tournament.  Prior to that, however, the Crusaders step out of league play one final time for a Wednesday doubleheader at home against Western Michigan.  First pitch of game one is scheduled for 3 p.m., and all the action can be heard live on WVUR, 95.1 FM, Valparaiso and online at www.valpoathletics.com, which will also have links for live stats.