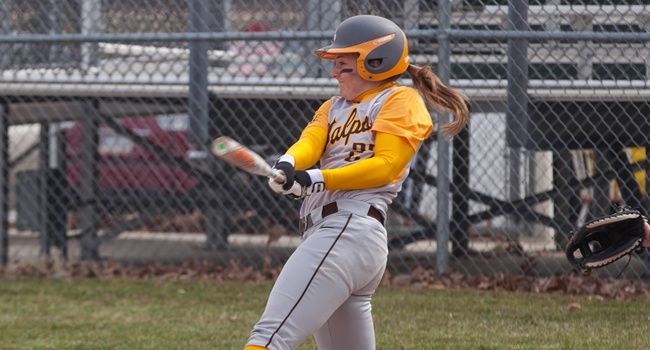 An entertaining afternoon at the Valparaiso University Softball Field was capped in the most entertaining way possible for Crusader fans, as sophomore Janelle Bouchard (Kennebunk, Maine/Kennebunk) launched a two-run homer in the bottom of the eighth inning of the nightcap, giving Valparaiso a 4-3 victory over Northern Illinois and a sweep of the doubleheader.  Valpo rallied from a four-run deficit for an 8-6 win in the opener.

“Winning is a mentality and it is something that is contagious,” said Crusader head coach Jordan Stevens.  “We’ve talked about that with our team throughout this season, and until now we haven’t really been able to string together wins – we’ve had to fight through it.  Now we've played some good softball over the past week to win some games in a row – we’re playing really well going into this coming weekend.”

The day got off to a less-than-ideal start for the Crusaders in the opener, as Northern Illinois jumped to a 4-0 lead through three turns at bat.  Emily Naegele connected on a solo homer in the second to put the Huskies on the board, and Rebecca Rupard and Shelby Miller combined for three RBIs on a pair of doubles in the third inning to give NIU a four-run edge.

Valpo wasted no time cutting that deficit in half, however, plating two runs of its own in the bottom of the third.  Senior Angie Doerffler (Fort Wayne, Ind./Concordia Lutheran) led off the frame by turning on the first pitch she saw and driving it to the wall in left-center field.  Two batters later, sophomore Kaitlyn Ranieri (Schererville, Ind./Lake Central) attacked the first pitch and reaped the rewards, sending it over the wall in center for a two-run homer, making it a 4-2 game.  Ranieri, after homering just once in the first 85 games of her career, now has five home runs in the last 17 days.

Sophomore Taylor Weissenhofer (Orland Park, Ill./Lockport Township) struck out the NIU side in the top of the fourth, and then the Crusader offense went to work in the bottom of the frame, eventually putting a six-spot on the scoreboard.  Back-to-back doubles from junior Tarah McShane (Streamwood, Ill./St. Edward Central Catholic) and Bouchard put a pair of runners in scoring position, and two batters later, freshman Sam Stewart (Frankfort, Ill./Lincoln-Way East) crushed a 2-1 pitch well over the fence in left-center field – her three-run homer giving Valpo a 5-4 lead.

The Crusaders wouldn’t be content with just three runs, however.  Freshman Taylor Lawson (Tucson, Ariz./Sahuaro) and Ranieri both knocked two-out singles into center, and following an NIU pitching change, freshman Jorgi Calombaris (Frankfort, Ill./Lincoln-Way East) worked a nine-pitch walk after falling behind 0-2 to load the bases.  Senior Amanda Wisniewski (Skokie, Ill./Huntley) made it back-to-back free passes, as her walk forced home Lawson with the fourth run of the frame.  McShane, batting for the second time in the inning, picked up her second base hit, fileting a single the opposite way to plate Ranieri and Calombaris and push the Crusader lead to 8-4.

The extra runs proved vital, as Northern Illinois responded immediately with three straight hits to lead off the fifth, the last of which was a two-run double from Rupard to cut the Valpo edge to 8-6.  Sophomore Mollie Lindeman (Hebron, Ind./Hebron [PNC]) entered in the circle and induced a grounder back up the middle which Wisniewski made a nice play on her backhand on to record the first out.

Then, with a runner on third and one out, the Crusaders took advantage of a failed squeeze attempt by the Huskies, with Bouchard nailing the NIU runner attempting to retreat to third for the second out.  Fifth-year senior Jessie Marinec (Alsip, Ill./Marist) closed out the defensive half-inning by ranging deep into foul territory down the left-field line to chase down the final out of the frame.  NIU would load the bases with two outs in the sixth and put two on with two away in the seventh, but both times, Lindeman recorded the key out to preserve the win.

“I thought the fifth inning in game one was the turning point of that game,” said Stevens.  It could have gone either way.  Mollie came in with the runner on second and nobody out, and we got three really good defensive plays to get us out of it.  I thought that was the inning that really won the game for us.”

Weissenhofer picked up the win in the opener, striking out nine in her four-plus innings of work, while Lindeman earned her first career save with three shutout innings out of the bullpen.  Rupard took the loss in the circle for NIU, falling to 4-6 after giving up seven runs in 3.2 innings.  Ranieri continued her torrid hitting of late, going 3-of-4 with two runs scored and two RBIs, while Bouchard and McShane each registered a pair of base hits as well.

The nightcap would prove to be a lower-scoring affair, but just as tightly contested.  Both teams scored their first run in the second inning in unconventional fashion.  Northern Illinois cracked the scoreboard first in the top of the frame, as an two-out infield single from Jordyn Bowen brought Jessica Sturm all the way around from second base.  But Valpo answered in its half of the second with an even more improbable run, as Bouchard tagged up from second base on a fly to deep center from Marinec and advanced not just to third base, but an extra 60 feet to home, sliding in ahead of the tag on the unusual sacrifice fly as the game was tied at 1-1.

Valpo claimed the lead in the bottom of the third, loading the bases on two singles and a walk before McShane knocked a single back through the middle to score Lawson.  But the Huskies knotted the game up at 2-2 in their next turn at bat, as Naegele delivered a two-out double to score Shelby Miller.

Both teams threatened in the sixth, as the Huskies and Crusaders both had two runners on base in the inning, but neither could push the tie-breaking run across the plate.  Then, in the seventh, NIU led off with a single, prompting Stevens to call for Weissenhofer in relief of Sierra Pico (Las Vegas, Nev./Legacy).  An infield single made it two on, and after a strikeout, a four-pitch walk loaded the bases with just one away.  But Weissenhofer induced a pop-out on the infield and then picked up a strikeout looking to keep the game all square.  Valpo went down in order in its half of the seventh, as the Crusaders headed to extra innings for the first time all year.

NIU’s Kayti Grable put the Huskies in front in the top of the eighth with a long home run to left with one out in the top of the eighth.  But the Crusaders took advantage of their last at-bat to send the fans home happy.  McShane blooped the first pitch she saw into shallow left-center to put the tying run aboard, and after Lindeman entered as a pinch-runner, Bouchard drilled a 1-0 pitch to straightaway center for the walk-off four-bagger.

Pico was solid in the circle in the start, scattering five hits in six-plus innings of work, while Weissenhofer picked up her second win of the day with her two innings of relief, improving to 9-5 on the season.  Sturm went the distance on the rubber for Northern Illinois (15-18), falling to 9-9.  Bouchard and McShane both picked up two hits in the nightcap as the Crusaders’ four and five hitters each posted a pair of multi-hit games on the day.

“I thought we were really good offensively today – we really didn't give up many at-bats,” said Stevens.  “We swung the bat well, and did really well from one through nine in the lineup, especially against a good lefty in game two – we took good swings up and down the order.”

Valparaiso (13-23) puts its five-game winning streak on the line Saturday afternoon when the Crusaders return to Horizon League play with a home doubleheader against Cleveland State.  First pitch of game one is scheduled for 1 p.m., and all the action can be seen live on the Horizon League Network and heard live on WVUR, 95.1 FM, Valparaiso.  Links for the live video and audio, as well as live stats, will be available at ValpoAthletics.com.