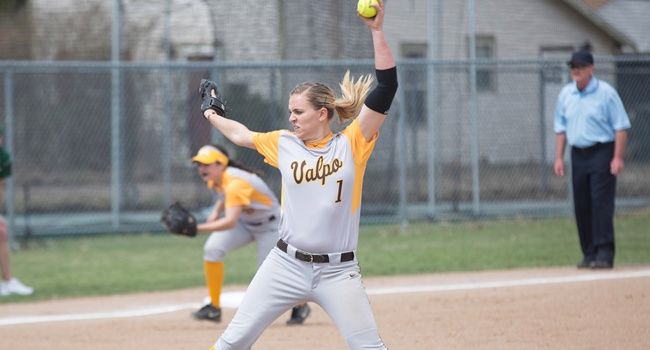 Taylor Weissenhofer went the distance in the circle for the Crusaders.
Valparaiso at Wright State | April 27, 2014
Related Links
Related Links

The Valparaiso softball team was unable to get much going offensively on Sunday in its series finale at Wright State, falling 3-0 to the Raiders.

The Crusaders put runners into scoring position with less than two outs in each of the first two innings, but were not able to open the scoring.  Wright State then struck for two runs in the bottom of the second, getting runners on second and third with one out.  Sophomore Taylor Weissenhofer (Orland Park, Ill./Lockport Township) registered a strikeout to get within one out of escaping the threat, but WSU’s Hanna Floyd lined a double to the left-center gap to give the Raiders the lead.

Wright State added another insurance tally in the bottom of the fourth on a solo homer from Kacie Rapshus.  Valpo’s best threat came in the sixth, when freshman Jorgi Calombaris (Frankfort, Ill./Lincoln-Way East) and senior Amanda Wisniewski (Skokie, Ill./Huntley) led off the frame with back-to-back singles.  Two batters later, sophomore Janelle Bouchard (Kennebunk, Maine/Kennebunk) singled to load the bases with one out, but a strikeout and a groundout left the bases loaded, and Valpo would go down in order in its final turn at the plate.

Weissenhofer took the complete-game loss for the Crusaders, falling to 13-9 on the year, while Wright State (15-28, 10-6 Horizon) pitcher Krystian DeWitt went the distance and improved to 9-11.  Freshman Sam Stewart (Frankfort, Ill./Lincoln-Way East) reached base twice – doubling once and also drawing a walk.

Valparaiso (20-28, 10-6 Horizon) is slated to step out of league play twice this week, beginning with its home finale on Tuesday at the Valparaiso University Softball Field in a 3 p.m. doubleheader against IUPUI.  Live stats will be available at ValpoAthletics.com.