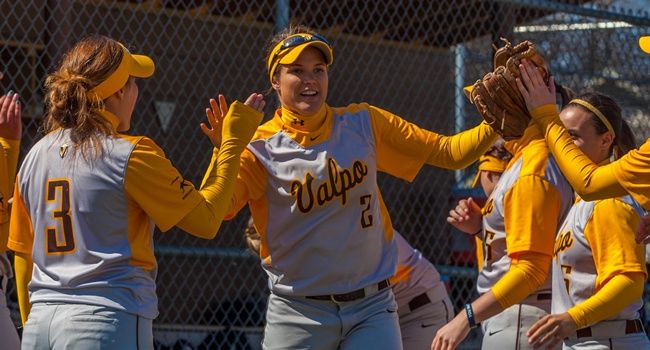 For the third time in her career, senior Angie Doerffler (Fort Wayne, Ind./Concordia Lutheran) delivered a walk-off hit in the Horizon League Championship, this time a two-out, two-run double in the bottom of the seventh to give third-seeded Valparaiso a 4-3 victory over sixth-seeded UIC in the opener of the 2014 Horizon League Championship from Dayton, Ohio.  With the win, the Crusaders advance to play second-seeded Wright State this afternoon.

Entering the final frame down 3-2, junior Tarah McShane (Streamwood, Ill./St. Edward Central Catholic) lined a leadoff single down the third-base line.  Pinch-runner Amanda Korb (Indianapolis, Ind./Lutheran) moved up to second on a groundout, and then was ruled safe at second on a grounder from Jessie Marinec (Alsip, Ill./Marist) as the UIC fielder dropped the ball while applying the tag.

With two on, a strikeout had the Crusaders down to their final out, but then Doerffler stepped up to bat.  The senior, who picked up two walk-off hits on Championship Saturday at the 2012 tournament, took the first pitch before lining the next offering all the way to the wall in left-center, easily enough to plate both Korb and Marinec and set off the Valpo celebration at home plate.

UIC got the scoring started on Wednesday morning on a two-out RBI single from Paige Peterson in the top of the third.  The Crusaders responded immediately in their half of the third, however.  Sophomore Kaitlyn Ranieri (Schererville, Ind./Lake Central) led off the frame with her second hit of the game, and two batters later, senior Amanda Wisniewski (Skokie, Ill./Huntley) drove the first pitch she saw over the left-center fence for her 12th home run of the season, giving Valpo a 2-1 lead.

The Crusaders put runners on first and third with nobody out in the fourth and second and third with two away in the fifth in an effort to extend their lead, but could not push another run across the plate.  UIC claimed the lead in the top of the sixth when Laura Swan and Jenna Marsalli connected on back-to-back home runs, putting the Flames ahead by a 3-2 score.  Valpo loaded the bases with one out in the sixth in an attempt to answer, but was unable to, setting the stage for the dramatics of the bottom of the seventh.

Sophomore Taylor Weissenhofer (Orland Park, Ill./Lockport Township) started and tossed five-plus innings for the Crusaders, while fellow sophomore Mollie Lindeman (Hebron, Ind./Hebron [PNC]) earned the win out of relief, improving to 3-6 on the season as she retired all six batters she faced.  Alice Fitzpatrick took the complete-game loss for UIC (14-27), falling to 5-11.  McShane tallied three hits in the tournament opener, while Ranieri and Doerffler each had multi-hit games as well.

The win advances the Crusaders, who will now face Wright State at 3 p.m. CT Wednesday afternoon.  A win would leave Valpo just two victories away from the league title.