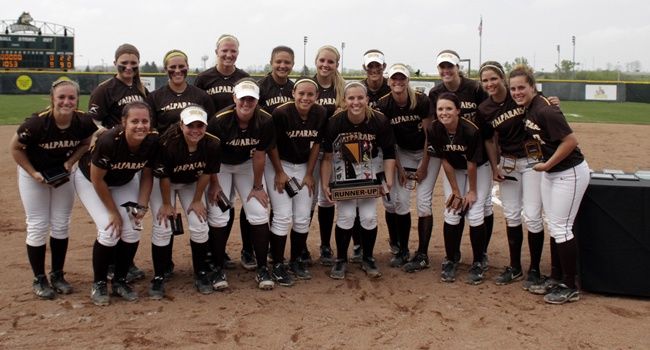 After the Crusaders went down 1-2-3 in the top of the first, the Phoenix struck in the bottom of the frame on three consecutive ground ball base hits, capped by an RBI double from Shannon Butts.  Valpo threatened to tie the game in the top of the second, as fifth-year senior Jessie Marinec (Alsip, Ill./Marist) singled with two outs and stole second, but a strikeout left her stranded in scoring position.

The Crusaders also got a runner on thanks to a two-out single from Ranieri in the third, but couldn’t advance her past first.  Green Bay broke the game open with five unearned runs in the bottom of the third, and added three more in the fourth as well.  Senior Angie Doerffler (Fort Wayne, Ind./Concordia Lutheran) kept hopes alive for a rally as she was hit by a pitch with two out in the fifth, but a ground ball ended the game and Valpo’s season.

Sophomore Sierra Pico (Las Vegas, Nev./Legacy) took the loss as she started in the circle for the Crusaders, falling to 4-14 despite giving up just one earned run in her 2.2 innings of work.  Ashley Nannemann, the tournament MVP, threw her second complete game in as many days against the Crusaders to improve to 11-7 for Green Bay (27-12).

Bouchard earned a spot on the All-Tournament Team after going 5-of-14 for the tournament, picking up hits in each of the first four games, including a pair of doubles in Valpo’s win over Wright State.  McShane went 3-for-4 in the tournament-opening win over UIC and then delivered three RBIs in Friday’s win over the Flames, including the walk-off winner in the eighth inning.  Ranieri went 5-of-14 as well over Valpo’s five tournament games, scoring two runs and hitting a home run in Friday’s win over UIC.

Marinec, Doerffler and Wisniewski appeared in 234, 233 and 224 games, respectively, during their Crusader careers, the top three in games played in Valpo history.  Doerffler tallied 705 at-bats during her career and tallied 439 assists in the field at shortstop, both Crusader career records, while Wisniewski finished her career second in program history in both home runs (30) and walks (95).