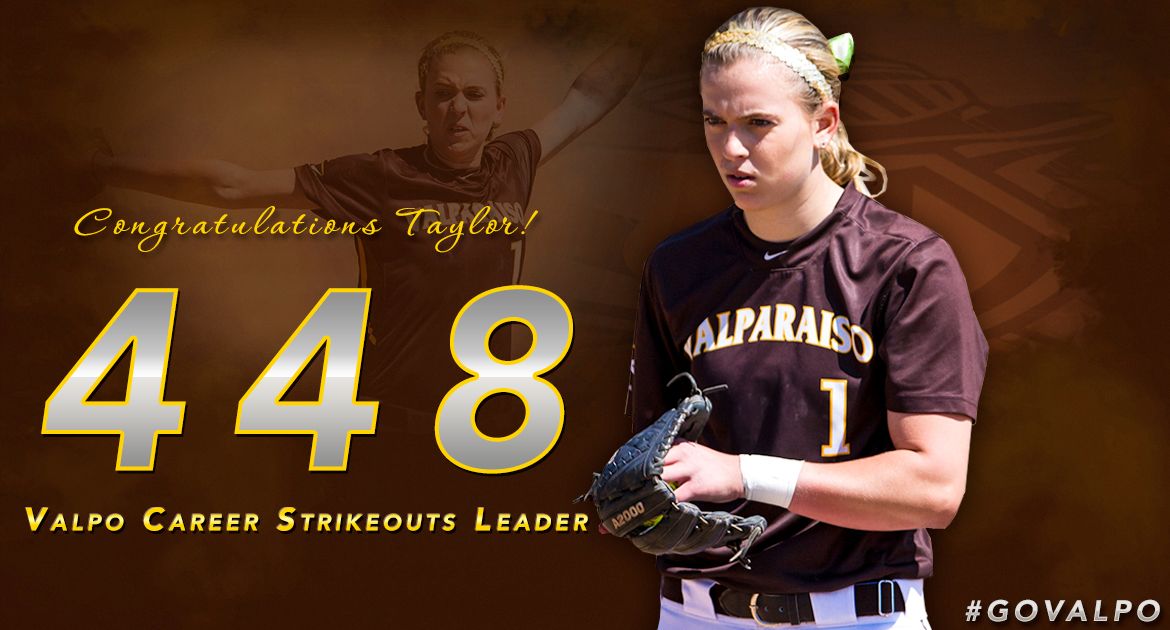 The Valparaiso University softball team fell in a pair of games  Saturday as it continued the opening weekend of play at the Juiceblendz FIU Invitational in Miami, Fla. The Crusaders dropped an early-morning matchup against LIU Brooklyn, 6-1, before losing to St. John’s 12-0 in the afternoon. Senior Taylor Weissenhofer (Orland Park, Ill./Lockport Township) broke Valpo’s career strikeouts record in the game against the Red Storm.

Weissenhofer entered the season with 442 career strikeouts, just six strikeouts shy of breaking Alex Lagesse’s Valpo career record. After tallying two strikeouts against Illinois on Friday, the senior picked up three K’s in relief versus LIU Brooklyn in Saturday’s opener to tie Lagesse’s mark. Then, starting in the circle against St. John’s, Weissenhofer set down the very first batter she faced on strikes to establish the new record of 448 strikeouts.

Unfortunately for the Crusaders, the rest of the game would go St. John’s way. The Red Storm connected on three home runs in the first inning in a seven-run frame en route to the run-rule win. Offensively, Valpo would be no-hit by St. John’s starter Madison Morris. Sophomore Stephanie Moreno (Murrieta, Calif./Murrieta Valley), senior Kaitlyn Ranieri (Schererville, Ind./Lake Central) and junior Sam Stewart (Frankfort, Ill./Lincoln-Way East) all drew walks for the Crusaders, while sophomore Lanie Callaghan (Elburn, Ill./Kaneland) stole a base in the loss as well.

Valpo trailed from the outset in the first game of the day as well, as LIU Brooklyn scored a run in the opening inning. The Crusaders were just 1-of-9 with runners in scoring position, scoring their lone run in the sixth inning. After loading the bases with nobody out, junior Jorgi Calombaris (Frankfort, Ill./Lincoln-Way East) drove in freshman Carly Trepanier (Manteno, Ill./Manteno) with an infield grounder to account for the Crusaders’ lone run.

Six different Crusaders picked up base hits against the Blackbirds, as no Valpo player posted more than one hit. Callaghan came off the bench to reach base twice with a single and a walk. Senior Sierra Pico (Las Vegas, Nev./Legacy) took the loss in the circle, starting and tossing the first four-plus innings, while Erynn Sobieski earned the complete-game win for LIU Brooklyn.

Valparaiso (0-3) concludes play from Miami on Sunday with two more games. The Crusaders will take on #10 Florida State at 10 a.m. CT before closing the tournament against host FIU at 2 p.m. CT. Live stats for both games will be available via ValpoAthletics.com.