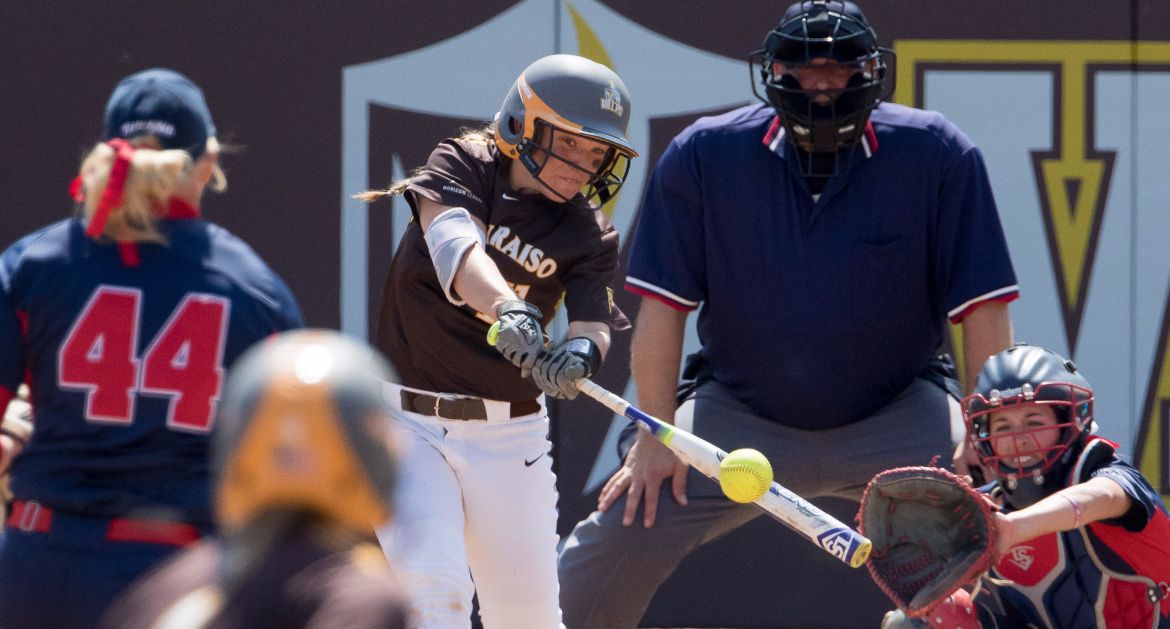 The Valparaiso University softball team scored in each of the final four innings of its series finale with Detroit Saturday afternoon to earn a 9-1 run-rule victory over the Titans in five innings. The Crusaders’ attempt at a seventh-inning stunning rally in the opener brought the potential winning run to the plate, but Detroit ended up with a 9-6 victory as the two squads split the doubleheader.

The Crusaders claimed the lead in the nightcap in the bottom of the second inning. Senior Kaitlyn Ranieri (Schererville, Ind./Lake Central) lined a single back through the middle to start the frame, and junior Jorgi Calombaris (Frankfort, Ill./Lincoln-Way East) reached on a bad-hop single on the infield. After both runners moved up on a sacrifice bunt, sophomore Jasmine Ramirez (Litchfield Park, Ariz./Millennium) grounded out to score Ranieri, and fellow sophomore Stephanie Moreno (Murrieta, Calif./Murrieta Valley) knocked a single into the 5-6 hole to plate Calombaris and make it 2-0 Crusaders.

It took Valpo just five pitches to add to its lead in the third inning. Junior Taylor Lawson (Tucson, Ariz./Sahuaro) led off with a single through the left side of the infield, and promptly stole second on the first pitch to sophomore Taylor Nadler (New Haven, Mo./St. Francis Borgia). Nadler then turned on the next pitch she saw for an RBI single, scoring Lawson, moved up to second on a wild pitch and came home on a single into shallow left from junior Sam Stewart (Frankfort, Ill./Lincoln-Way East).

Detroit got on the board in the top of the fourth inning thanks to a sacrifice fly, and later in the inning, loaded the bases with two outs after back-to-back walks. Head coach Kate Stake went to the Crusader bullpen and called upon sophomore Ashlyn Montgomery (Lebanon, Ind./Lebanon). Montgomery’s first three pitches were balls, but the sophomore battled back and eventually induced a groundout to first to escape the jam and keep the lead at 4-1.

The Crusaders carried the momentum to the plate in the bottom of the fourth. Ramirez, Moreno and freshman Carly Trepanier (Manteno, Ill./Manteno) loaded the bases on three consecutive singles in just a seven-pitch span, and a passed ball moved the trio up 60 feet apiece – Ramirez crossing the plate to push the advantage to 5-1.

After Lawson drew a walk to re-load the bases, Nadler worked a full-count walk behind her, scoring Moreno. Stewart decided to take care of business with her bat immediately behind Nadler in the order, scorching a 2-1 pitch back up the middle to score two more runs and make it an 8-1 ballgame.

While the Crusaders eventually left the bases loaded in the fourth, they ended the game via run rule in the bottom of the fifth. Needing just one run, sophomore Brenna Boyle (St. John, Ind./Andrean) lined a pinch-hit single into left, and following a wild pitch, Trepanier dropped down a bunt single to put runners on the corners with nobody out. Three batters later, with the bases loaded and one away, Stewart lifted a fly ball into shallow right field, but it proved to get the job done, as Moreno slid in just ahead of the tag from the Detroit catcher for the game-ending run.

The Crusaders tallied 12 hits in the victory, matching their largest hit total of the season, and were led by two-hit games from Trepanier, Moreno and Stewart. Moreno and Lawson both scored a pair of runs, while Stewart finished the win with four RBIs. Nadler reached base three times as well, thanks to a hit and a pair of walks, and drove in two runs.

Senior Mollie Lindeman (Hebron, Ind./Hebron [PNC]) recorded the win as she surrendered just one run on two hits in starting and throwing 3.2 innings, improving to 5-8 on the season. Montgomery tallied the save, her first of the season, in getting four outs while giving up just a single base hit. The first of four Detroit pitchers, Ashley Mauser took the loss as she started and went three innings to fall to 6-12.

Saturday’s opener turned out to be a wild one, but started out relatively benign. Detroit opened the scoring in the top of the second, loading the basses on walks before drawing a bases-loaded free pass, which the Crusaders answered in their half of the inning with a no-doubt solo homer from Stewart – her fifth of the year.

The Titans regained the lead in the third, as after back-to-back walks to start the inning, a sacrifice bunt and a groundout pushed across the go-ahead run. Valpo threatened in its next turn at bat, putting two runners on with one out, but couldn’t even up the game.

The teams would keep each other off the scoreboard until the sixth inning. A leadoff walk for the Titans was followed by a two-run homer from Christa McGahuey – the first Detroit hit of the game – to make it 4-1. Then, following a pitching change to start the seventh, Detroit added five more runs, capped by a McGahuey grand slam.

Despite the eight-run deficit, however, the Crusaders would not go down quietly. A trio of singles would load the bases with one out in the inning, and the rally commenced from there. Ranieri pushed the first run across the plate with a walk, allowing Calombaris to score, and an error made it a 9-3 ballgame.

Stewart then drew the Crusaders’ second bases-loaded walk of the inning to cut the deficit to five runs, and Nadler then delivered a single back up the middle, drawing Valpo to within 9-5. Two batters later, Calombaris recorded her second hit of the inning with a sharp liner through the Detroit first baseman, bringing home Ramirez to cut the lead to 9-6. But with the potential winning run at the plate, Trepanier’s line shot was snagged by the Titans’ second baseman to end the game.

Lawson, Nadler and Calombaris all had two hits to lead the Crusader offense in the opener, while Stewart reached base twice as well. Senior Taylor Weissenhofer (Orland Park, Ill./Lockport Township) took the loss for the Crusaders to fall to 4-10, giving up four runs in six innings despite surrendering just one hit, as she walked nine batters and struck out nine as well. Keaira Schilling picked up the win out of the bullpen for Detroit (15-33, 7-11 Horizon), improving to 2-6 as she saw 3.1 innings of work.

Valparaiso (9-29, 5-11 Horizon) steps out of league play for a single mid-week game next week, traveling to Fort Wayne to take on IPFW Tuesday afternoon. First pitch is slated for 2:30 p.m. CT, with live stats available via ValpoAthletics.com.