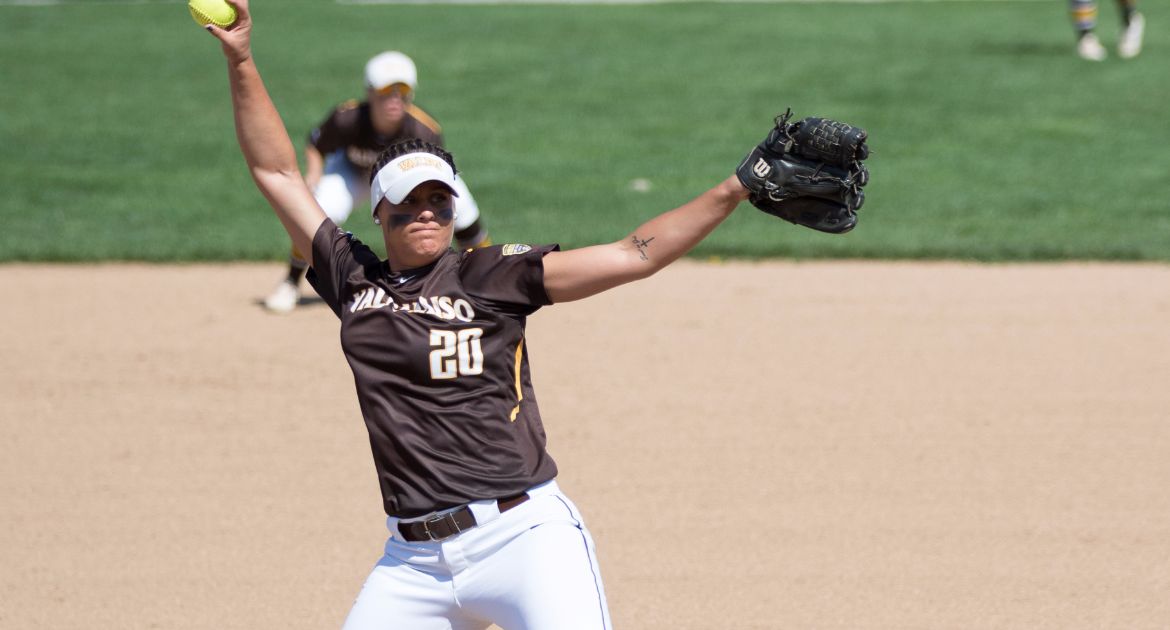 Mollie Lindeman is one of five Crusader seniors being honored this weekend.
Oakland at Valparaiso | April 29, 2016

Next Up in Crusader Softball: The Valparaiso University softball team faces its final home Horizon League series of the season this weekend as the Crusaders welcome Oakland to town for a single game on Friday afternoon and a doubleheader scheduled for Saturday. Valpo will hold its annual Senior Day ceremony prior to Friday's series opener, honoring a class of five seniors.

Previously: Valpo won a mid-week contest earlier this week at IPFW, as Taylor Weissenhofer threw a one-hit shutout in a 6-0 win over the Mastodons. Last weekend saw Detroit take two of three games from the Crusaders.

Following the Crusaders: All three games of this weekend's series will be broadcast on ESPN3 and will have live stats available via ValpoAthletics.com. Numerous Valpo games are slated for broadcast on ESPN3.com this spring, including most scheduled home games and a number of road Horizon League contests.

Head Coach Kate Stake: Kate Stake was hired as head coach of the Valparaiso softball program on July 23, 2014 and is in her second season as head coach, owning 27 victories. Stake arrived at Valpo with eight seasons of assistant coaching experience at the Division I level, most recently serving as an assistant at mid-major power Hofstra.

Series Notes: Valpo narrowly trails the all-time series with Oakland, 17-15. Formerly both members of the Mid-Continent Conference, the Crusaders joined the Horizon League in 2007 and were reunited with Oakland when the Golden Grizzlies joined prior to the 2014 season. Since Oakland joined the league, the teams have played a pair of three-game series in Valpo, with Oakland holding a 4-2 edge.

Looking Ahead: The Crusaders step out of league play for the final time next Wednesday afternoon, hosting Northern Illinois for a doubleheader. Valpo then finished out the regular season next weekend at Wright State.

Scouting the Opposition: Oakland enters this weekend's series just above the Crusaders in the league standings, owning an 11-25 overall record and a 6-8 mark in Horizon League play. The Golden Grizzlies took on Cleveland State in a mid-week series this week, dropping two of the three games. Senior Sarah Hartley leads the Oakland offense, hitting .341 with six home runs, 24 runs scored, 20 RBIs and 23 stolen bases.

Celebrating the Seniors: The Crusaders will host their annual Senior Day ceremony prior to Friday's game against Oakland, sending off its five-player senior class. Mackenzie Buchelt, Sierra Pico, Kaitlyn Ranieri and Taylor Weissenhofer have all spent the last four years at Valpo, helping the Crusaders to 86 victories and the Horizon League title and an NCAA Tournament trip in 2013. Mollie Lindeman came to the program prior to the 2014 season, joining the aforementioned quartet for the last three years.

Weissenhofer In Shutdown Mode: Senior pitcher Taylor Weissenhofer has been virtually unhittable lately, culminating in her third one-hitter of the year earlier this week against IPFW - a game in which she carried a no-no into the seventh inning. Weissenhofer, who struck out 10 batters against the Mastodons, has taken a no-hitter into at least the sixth inning in each of her last three starts. In her last four appearances (including a relief outing at Notre Dame), the senior has surrendered just four hits in 21.1 innings of work and struck out 26 batters, allowing opponents to hit just .063 off of her.

Strong Performances at the Plate: Junior Sam Stewart and sophomore Stephanie Moreno have enjoyed success offensively over the last week-plus for the Crusaders. Stewart started all three games at catcher in the Detroit series and went 4-for-8 with a home run and seven RBIs, while also throwing out four of five runners attempting to steal. Meanwhile, Moreno is 6-for-13 over the last five games with five runs scored and five RBIs, including home runs at Notre Dame and at IPFW.

Leading the Way In League Play: Freshman Carly Trepanier has paced the Crusaders in batting average in her first season of Horizon League play, hitting .354 (17-for-48) through the first 16 games. Sophomore Taylor Nadler and senior Kaitlyn Ranieri both have drawn 10 walks, own on-base percentages above .450 and are tied for team-high honors in league play with nine RBIs apiece, while junior Taylor Lawson is hitting .302 with eight runs scored and seven stolen bases. In the circle, sophomore Ashlyn Montgomery has been stellar in six relief appearances, picking up a save and entering this weekend with a 1.34 ERA in league action - surrendering just three earned runs in 15.2 innings and allowing opponents to hit just .217 off of her.

New Records This Year: A pair of Crusader seniors have set new Valpo career records already this year. In the circle, Taylor Weissenhofer broke Valpo's career strikeouts record in the Crusaders' third game of the year - Feb. 13 versus St. John's - and now owns 547 career K's, while her start this past Tuesday at IPFW marked her 139th career appearance in the circle, matching a Valpo record. At the plate, Kaitlyn Ranieri drew a walk in her first plate appearance of the year to set a new Valpo career record in that category and currently has 121 career walks.

Moving Up the Charts: While Ranieri already tops the career walks chart, she is continuing to advance on a number of other career charts as she nears the close of her career. The senior is currently third in Crusader history in doubles (43, two shy of second), third in hits (216), third in total bases (340), tied for third in home runs (25), third in RBIs (109) and fourth in runs scored (128, four shy of third).