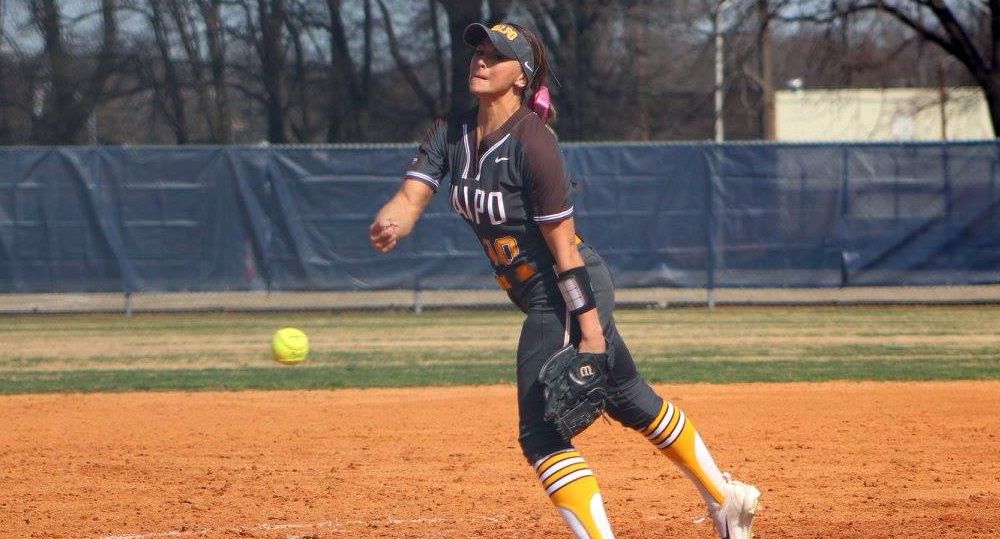 Next Up in Crusader Softball: After a weekend away from competition, the Valparaiso University softball team gets the spring slate started in earnest this weekend, as the Crusaders travel to the Purple/Gold Challenge, hosted by Lipscomb in Nashville, Tenn. Valpo will face Stony Brook twice and Eastern Illinois, in addition to the host Bison.

Previously: The Crusaders opened the 2017 season two weekends ago at the Aggie Invitational in Greensboro, N.C. with a perfect 4-0 record. Valpo defeated host North Carolina A&T twice, as well as UMBC and Howard. The Crusaders' tournament finale versus Appalachian State was declared No Game after reaching the drop-dead time tied midway through the fifth inning.

Looking Ahead: Valpo will face its toughest test of the non-league slate on Wednesday, March 8 as the Crusaders play at #11/9 Alabama in a game slated for broadcast on SEC Network+. They will then stay in the state of Alabama to play in the Choccolocco Invitational from March 10-12.

Following the Crusaders: All four games at this weekend’s tournament are slated to have live stats, with links to all available at ValpoAthletics.com. Numerous Valpo games are slated for broadcast on ESPN3, WatchESPN and the ESPN app this spring, including all 12 scheduled home Horizon League contests.

Head Coach Kate Stake: Kate Stake was hired as head coach of the Valparaiso softball program on July 23, 2014 and is in her third season as head coach, owning 38 victories. Stake led the Crusaders to the 2016 Horizon League Championship and a berth in the NCAA Tournament - the third in program history. Stake arrived at Valpo with eight seasons of assistant coaching experience at the Division I level, most recently serving as an assistant at mid-major power Hofstra.

Series Notes: Valpo will be facing both Lipscomb and Stony Brook for the first time in program history this weekend. The Crusaders own a 3-12 record all-time versus Eastern Illinois, most recently falling 3-0 at EIU on March 27, 2014.

Looking Back at 2016: The 2016 season saw Valpo make a run for the ages, as the Crusaders needed a win on the final day of the regular season just to make the Horizon League Championship. But once there, Valpo more than proved it belonged, rolling through the first three days of the tournament before rallying from a four-run deficit in the seventh inning to defeat Wright State and claim the Horizon League title and the league's automatic berth into the NCAA Tournament.

Stewart Secures League Honor: Sam Stewart was named the Horizon League Batter of the Week on Feb. 20 following the perfect opening weekend as she led the way for the Crusaders at the plate. Over the four games, Stewart hit .545 with four home runs, eight runs scored and seven RBIs, getting on base at a .667 clip and slugging 1.727. Her weekend was highlighted by back-to-back multi-home run games on Feb. 18 in wins over UMBC and North Carolina A&T, tying the school record for home runs in a single game with two in each contest. Stewart was the first Valpo player to earn Batter of the Week accolades from the league office since Jorgi Calombaris on Feb. 23, 2015.

Top Performances at the Plate: A pair of Crusaders had standout single-game performances in Valpo's victory over Howard. Senior Taylor Lawson picked up a career-best four hits in the win over the Bison, matching the second-most hits in a single game dating back to 1999 (when the single-game record books begin). Meanwhile, junior Jenna Stauffenberg cleared the bases twice in the victory for six RBIs - third-most in a single game in that time span.

Going Yard: Valpo's bats turned up in a big way in the victory over North Carolina A&T on the 18th, as the Crusaders connected on five home runs - the most home runs in a single game in program history. Junior Jasmine Ramirez got things started with a homer in the second inning, followed the next frame by a round-tripper from Stewart. Freshman Gabby Magnifico made the first official at-bat of her career a memorable one, going yard in the fourth inning. Sophomore Carly Trepanier led off the seventh inning with a home run, and Stewart went deep later in the Crusaders' final turn at the plate to cap the scoring.

Raking at the Plate: Led by Stewart's huge weekend, the Crusaders enjoyed offensive dominance in their quartet of wins on their opening weekend, hitting at a .324 clip as a team while OPSing 1.089. Stauffenberg hit .455 (5-for-11) as the next-best regular behind Stewart, while on the bottom end, only one regular hit worse than .250 over the four games. Eight different players tallied at least one extra-base hit as nearly half the team's hits (17 of 35) were of the extra-base variety.

Pitchers Taking Control: While the Crusader bats enjoyed strong games at the plate, the combination of juniors Ashlyn Montgomery and Kenzie Grossmann dominated the opposition from the pitching circle. Montgomery surrendered just two unearned runs in three starts, going 2-0 and giving up just six hits in 12 innings pitched for an opponents' batting average of .150. Meanwhile, Grossmann - in her first appearances at Valpo since transferring from Morehead State - made an impact in her debut in the season opener, registering a two-inning save and recording all six outs via the strikeout. She ended the weekend 1-0 with two saves, giving up just two runs - one earned - in 10.1 innings of work while striking out 18 batters and walking none.