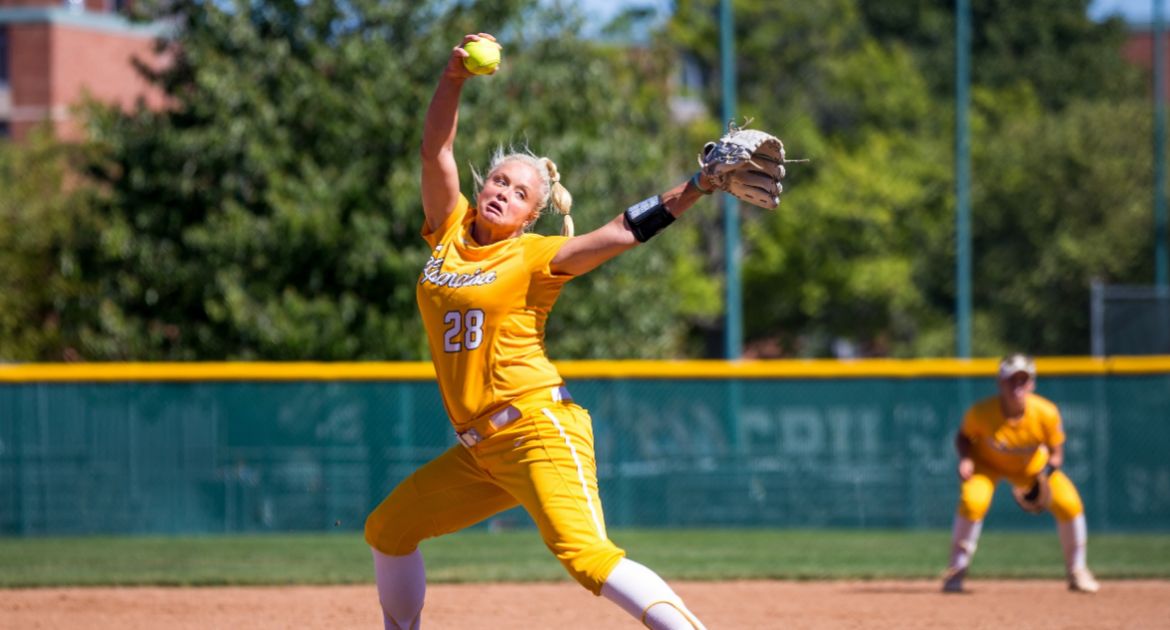 The Valparaiso University softball team made its mark in its first season of Missouri Valley Conference play, finishing in fourth place and reaching the conference tournament semifinals in one of the nation’s top-10 conferences. Now, entering the 2019 campaign, Valpo returns a solid core of key contributors from last year’s squad and supplements that group with a large contingent of newcomers as it attempts to take another step forward in 2019.

“This has been a fun team to coach since we got them in August,” said head coach Kate Stake. “Our upperclass leadership is good and our newcomers have fallen into stride with our returners. There's currently a tone about this team that excites me for what lies ahead of us the next couple months. I'm looking forward to getting out from under a ceiling and onto the dirt and getting to play ball with this group.”

The strength of any softball team starts in the circle, and Valpo returns a pair of strong arms there in juniors Kelsie Packard and Emily Richardson.

Packard comes off a stellar 2018 season, as she was named the MVC Newcomer of the Year and a Second Team All-Conference honoree in her first season at Valpo. The junior went 8-5 last season with a 2.68 ERA in 102 innings of work, striking out 111 batters. Packard ranked third in the MVC in conference-only play in opponents' batting average (.216), fourth in ERA and fourth in strikeouts, and especially stood out down the stretch of the season, going 6-1 with a 0.80 ERA and 63 strikeouts in 52.2 innings in her final nine appearances against conference opponents.

Meanwhile, Richardson was also a strong piece of Valpo’s success last season, primarily appearing out of the bullpen. Richardson made 21 of her 27 appearances in relief, posting a 4-2 record along with four saves and a 2.71 ERA in 72.1 innings of work. She surrendered fewer than five hits per seven innings, a mark which ranked 45th nationally and second in The Valley. In one of her six starts, Richardson tossed Valpo’s first seven-inning no-hitter since 2002 as she shut down North Carolina Central.

Joining the pitching staff this season are a pair of newcomers as well. Junior Jenna Edwards is a left-handed transfer from Chattanooga State C.C., where she was an All-Conference honoree last season. Freshman Taylor Knight is a righty from Elkhorn South [Neb.] H.S., where she helped lead the Storm to four consecutive state title game appearances and was the winning pitcher in the 2016 championship game.

“We are fortunate to return two pitchers who saw significant time in the circle last year, while adding a pair of newcomers who complement the returners in ways I believe will make our staff stronger and more potent,” said Stake. “Pack has worked hard over the last year to add to her game in ways that I expect will cement her name as one of the top pitchers in The Valley, while Emily has consistently entered games in the highest-pressure situations out of the bullpen and performed.”

On the other end of the Valpo battery will be a trio of catchers – one returnee and two incoming freshmen.

Junior Hannah Dybalski is the lone returning player with experience behind the plate for Valpo. Dybalski made 12 starts for Valpo last season, nine of which came at catcher, and hit .206 in part-time action.

Freshmen Taylor Tonoian and Maddie Henry will also be in the mix at catcher this season. Tonoian comes to Valpo from Saugus [Calif.] H.S., while Henry joins the Crusader program out of Stafford [Va.] H.S.

“Hannah brings two years of experience behind the dish, which has prepared her to take on a stronger leadership role, both with our pitching staff and with our team on the field,” said Stake. “Taylor and Maddie have both come in as freshmen and put in hard work during the offseason to prepare them for the upcoming season.”

A pair of seniors up the middle anchor Valpo’s infield entering the 2019 campaign.

Senior Carly Trepanier is the incumbent second baseman, having started all 51 games in each of the last two seasons. As a junior last year, Trepanier hit .291 with 23 runs scored and 17 RBIs, leading Valpo in batting average, hits and walks. She also represented Valpo on the MVC All-Defensive Team for her work in the middle infield.

Opposite Trepanier on the other side of the second-base bag is fellow senior Jaymee Lawton manning shortstop. Lawton hit .261 with 25 runs scored, 30 RBIs and 11 home runs last year, leading Valpo in home runs, RBIs and slugging percentage. She ranked second in the MVC in home runs and moved into a tie for fourth place in Valpo single-season history in the category.

At first base, Valpo graduated 38 starts from a season ago. Sophomore Brittany Anderson made the remaining 13 starts at first last season, as well as 12 starts at DP, posting an on-base percentage of .333 and a slugging percentage of .385 in MVC play. Junior Taylor Bowman will also battle for time at first after making 13 appearances off the bench last season.

At third base, sophomore Addi Burke made 44 starts in 2018 as a rookie, hitting .242 with 15 runs scored and 10 RBIs. Anderson could see action at third as well, as well as sophomore Ashley Barker – who made four pinch-hitting appearances last year – and freshman Taylor Herschbach, who comes to Valpo from Lockport Township [Ill.] H.S.

“Having the type of leadership through the middle that comes from a pair of seniors in Carly and Jaymee really benefits us in terms of game IQ,” said Stake.  “These two have played a lot of games, and a lot of games for Valpo, so they know our system and our expectations. Both Brittany and Addi Burke have been splitting time between the infield and the outfield, and are in the mix at third base, along with Ashley and Taylor Herschbach, who has worked out at shortstop as well. Taylor Bowman has worked hard and improved her game, and she and Britt are both big targets and good options for us at first base.”

With nearly 70% of last season’s starts in the outfield having departed, playing time at the three outfield spots is up for grabs in 2019.

The only other returnee with starting experience in the outfield is junior Addison Pixley, who made four of her five starts last season in left field and made a total of 21 appearances as a sophomore. Both Anderson and Burke could see action in the outfield in addition to battling for infield spots.

A pair of freshmen will fight to secure outfield positions as well in their rookie seasons. Peyton Moeder comes to Valpo from Mill Valley [Kan.] H.S., while Jaina Westphal comes out of Burlington [Wis.] H.S.

“We have a considerable amount of speed and athleticism in the outfield this year, and I think we should cover a lot of ground out there because of it,” said Stake. “We have a handful of players who are capable of playing at the 7, 8 or 9, which allows us a level of versatility and flexibility within our lineup. Morgan has continued to get better and I expect her to anchor our outfield from an experience standpoint. Addie Pixley is our other returning upperclassman who understands what it takes to play outfield at this level. Britt and Addi Burke have been working in the outfield as well, and we also have two freshmen in Jaina and Peyton who I think have a great deal of upside and ability to see innings out there.”

The season opens for Valpo this weekend as the team travels for a tournament hosted by Mississippi State in Starkville, Miss. Stephen F. Austin and Middle Tennessee State will also be part of Valpo’s opening tournament in addition to the SEC hosts.

Tournaments at Liberty, Charlotte and Lipscomb round out the pre-conference tournament slate, while Valpo will also take on North Carolina State in a single non-conference game in early March.