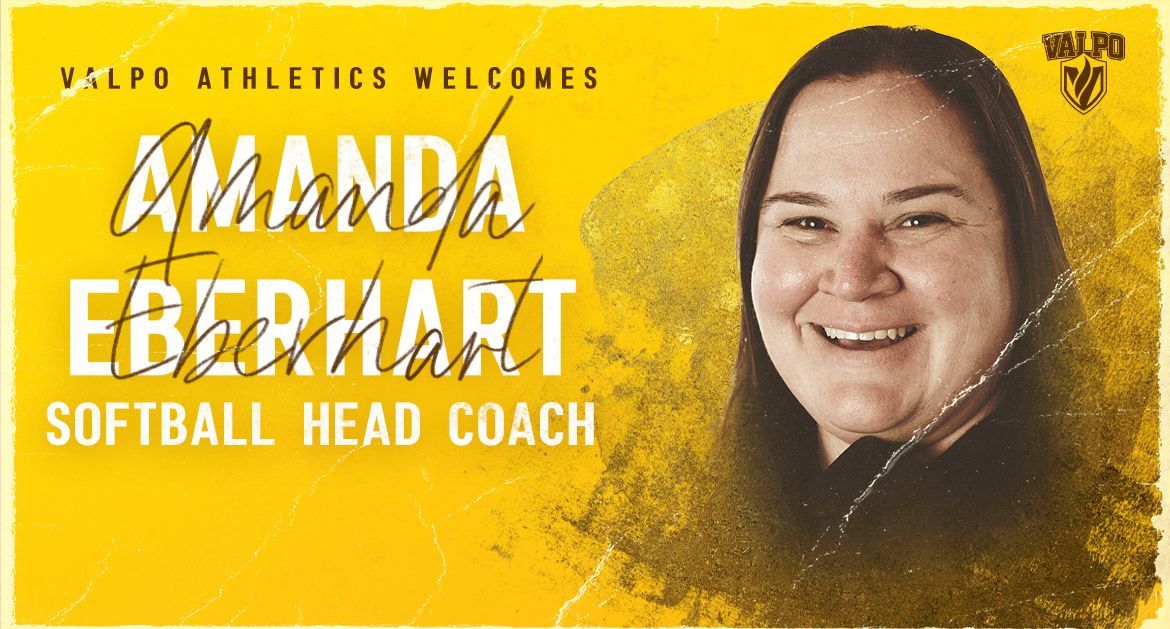 Valparaiso University Director of Athletics Mark LaBarbera announced today that Amanda Eberhart has been hired as head coach of the Valpo Softball program. Eberhart brings seven years of head coaching experience at the Division I level, most recently spending the last three years as the head coach at Omaha, and also has eight seasons of experience on staffs at Big Ten programs.

“One thing was clear from the beginning of our conversations with Coach Eberhart: her commitment to helping student-athletes reach their full potential in all areas of their lives,” LaBarbera said. “She has a proven record of strengthening programs and providing quality experiences. We are excited to welcome her to the Valpo Athletics family.”

“I'd like to thank Mark LaBarbera, Sarah Pruess and everyone involved in the search process for the opportunity to lead the Valpo Softball program,” Eberhart said. “My family and I are excited to be 'back home again in Indiana' and to become a part of the rich tradition of Valparaiso University. Valpo Softball is in a great position — both as a member of a strong mid-major conference in the Valley and with its location in a softball hotbed — and I'm looking forward to building positive momentum within the program over the coming years. I can't wait to get on campus and start working with the team — it's an exciting time!”

Eberhart enjoyed a successful 2021 campaign at the helm of the Mavericks, guiding Omaha to a second-place finish in Summit League regular season play and a runner-up placement at the Summit League Tournament as the Mavs reached the tournament championship game for the first time since joining the league. Four Mavs earned All-Summit League accolades, while they also boasted an NFCA All-Midwest Region selection.

The 2021 season, which saw a 15.5-game improvement overall and a 7.5-game improvement in Summit League play from the previous full season, was a continuation of the turnaround which began in the COVID-shortened 2020 campaign. That year’s Omaha squad posted a 12-12 record — the program’s best opening-month record since 2014 — and took a big leap forward offensively, finishing the year with a .309 team batting average and an .883 team OPS. The Mavs led the Summit League in eight offensive categories and closed the truncated season ranked 24th nationally in home runs and 36th in slugging percentage.

“I am extremely excited for Amanda Eberhart and her family to return to the state of Indiana and join the Valpo Athletics family,” Executive Associate Athletic Director and Senior Woman Administrator Sarah Pruess said. “She has a thorough understanding of what it takes to succeed at the Division I level. Throughout the process, it was evident that she knows what it takes to develop Valpo’s student-athletes to their full academic and athletic potential.”

Prior to joining Omaha, Eberhart spent the 2017 and 2018 seasons as an assistant coach at Purdue. Over her two years with the Boilermakers, the team hit 57 points higher in Big Ten play than it did the season before her arrival. Eberhart coached a pair of All-Big Ten selection and two NFCA All-Region choices over her two seasons in West Lafayette.

Prior to Eberhart’s arrival in Indianapolis, the Jaguars had made just two Mid-Continent Conference/Summit League Tournaments in 14 years, including none in the previous seven seasons. Under Eberhart, IUPUI advanced to the Summit League Tournament in each of her final three seasons, culminating in a run to the tournament championship game in 2016 for the first time in program history.

In Eberhart’s four years, she coached 12 All-Summit League honorees and had three players earn NFCA All-Region accolades. Her 2015 team ranked among the top-50 in the nation in doubles, home runs and stolen bases, while her teams still hold single-season program records for home runs, fielding percentage and pitching strikeouts.

Eberhart spent the 2012 season as a volunteer assistant at Northwestern, her second stint as a volunteer assistant with the Wildcats, as she was previously on staff in Evanston for the 2006 and 2007 seasons as well. She helped lead Northwestern to a Big Ten title and a second-place finish at the Women’s College World Series in 2006 as a member of the National Coaching Staff of the Year. The Wildcats posted a third-place WCWS finish in 2007 and earned a NCAA regional berth in 2012.

Between her stints at Northwestern, Eberhart spent the 2008 season as an assistant coach at North Carolina State before moving on for three seasons (2009-2011) as an assistant at Indiana. She helped guide the Hoosiers to a 37-18 record and a 17-3 mark in Big Ten play in 2011 as they made the NCAA Tournament for the first time since 2006.

Eberhart got her coaching start as a volunteer assistant at her alma mater, UIC, during the 2005 season. Eberhart was named a Louisville Slugger/NFCA All-American in her senior season with the Flames in 2004, when she was also named Horizon League Player of the Year. A four-time NFCA All-Region honoree and four-time All-Horizon League performer, Eberhart still holds the UIC program record for career home runs and ranks second in Flames history in RBIs and walks. A 2005 graduate from UIC, she was inducted into the UIC Athletics Hall of Fame in 2013.

What They’re Saying About Amanda Eberhart

“Amanda is a caring, compassionate and competitive coach who will work every day to create an environment for the Valpo student-athletes to thrive on the field, in the classroom and in the community. Valpo is getting a great coach and an even better person in Amanda. We will miss her in Nebraska, but understand the pull to bring her family home to Indiana.”

“Congratulations to the Valpo Softball program. They have hired an incredible mentor, teacher and coach. Any student-athlete who has the opportunity to play for Rivie will have an amazing experience.”

“Tremendous hire, a victory for Valpo Softball. Riv is a student-athlete centered coach who embodies high character, strong connection and a passion for the game. Having coached throughout the Hoosier State and the region, Riv provides veteran experience and knowledge, and her positive impact will be felt immediately.”