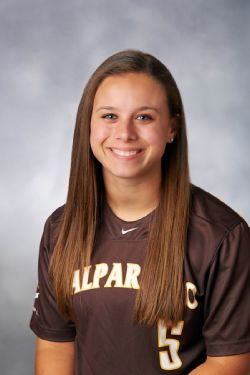 2014: Appeared in 10 games for the Crusaders during her junior season ... registered a hit against Iowa Feb. 28 ... drew a walk against Longwood on Mar. 2 ... laid down a pair of sacrifices on the season ... member of the Horizon League Academic Honor Roll.

2013: Made 42 appearances for the Crusaders as a sophomore, starting 28 times in the outfield ... hit .195 with 16 runs scored and 13 RBIs ... had three multi-hit games and three multi-RBI games ... named Horizon League Player of the Week Mar. 12 after going 4-for-8 with five runs scored, four RBIs and three doubles the previous week ... opened week Mar. 8 against Colgate by going 3-for-3 with three runs, two RBIs and two doubles ... followed the next day, again against Colgate, with two more RBIs and another double ... hit a home run and scored two runs in league win over Green Bay Mar. 30 ... went deep again for her second round-tripper of the year Apr. 7 at Loyola ... went 2-for-3 with a run scored Apr. 13 against UIC ... drove in pair of runs May 10 against Wright State at HL Championship ... helped Valpo capture title the next day with 3-for-4, R, RBI, 2B effort against Youngstown State in the championship game ... scored a run in the Crusaders' first-ever NCAA Tournament win May 18 against Central Michigan ... named to the Horizon League Academic Honor Roll both semesters.

2012: Saw action in 46 games during her freshman campaign at Valpo, starting 45 times in the outfield ... hit .194 on the season with 21 runs scored and 11 RBIs ... scored multiple runs in four games and also had three multi-hit contests ... went 2-for-4 with an RBI in first career start Feb. 11 against Nebraska-Omaha ... scored two runs each in games against Iowa State Feb. 11 and East Tennessee State Feb. 24 ... also scored two runs in outings Mar. 16 against CSU Bakersfield and May 11 in the Horizon League Championship against Youngstown State ... picked up two hits apiece Feb. 25 against Niagara and Mar. 16 at San Diego ... made her first career home run a grand slam at Cleveland State May 5 ... scored game-winning run in the bottom of the ninth of the first championship game against Loyola in the Horizon League Championship May 12 ... scored a run in each of the Crusaders' two NCAA Tournament games.

Prep: A four-year letterwinner for the Knights ... a three-time All-Conference selection ... an All-Area selection as a freshman ... All-State honorable mention as a senior ... Third Team All-State Coaches Associations honoree at pitcher each of her final two seasons ... Regional News Second Team choice at pitcher as a sophomore and a junior ... Regional News Second Team selection at shortstop as a freshman ... also lettered in basketball and volleyball ... First-Team All-Conference selection on the hardwood as a junior ... played ASA for Oak Lawn Ice (2005-2008) and Homer Hawks (2009-2011) ... member of National Honor Society.

Personal: Lindsey is the daughter of Ron and Barb Norway ... major is accounting ... has been named to the Dean's List and earned Presidential academic honors during her time at Valpo ... born April 14, 1993.