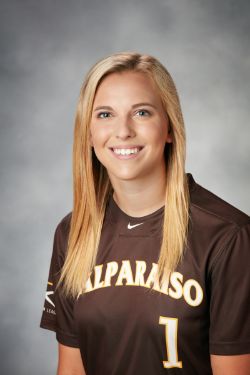 2015: Made 29 appearances in the circle as a junior for Valpo, starting 18 times ... went 2-12 with a 6.52 ERA ... struck out 88 batters in 103 innings of action ... ranked seventh in the Horizon League overall in strikeouts and was tied for sixth in strikeouts in league-only action ... opened season with back-to-back five-strikeout efforts ... tossed two perfect innings in Feb. 21 win over Alabama State ... strong in start against Colorado State Mar. 8, surrendering just one earned run in seven innings of work ... struck out seven in complete-game effort at Northern Illinois Apr. 14 ... earned win in league play at Cleveland State Apr. 18, going the distance and scattering eight hits ... struck out six in start Apr. 26 at Detroit, and followed with a season-high eight strikeouts in May 2 start in front half of doubleheader against Youngstown State ... recorded win in relief in nightcap versus the Penguins that day, striking out four in 2.1 perfect innings of work ... took tough-luck loss May 7 in start against UIC in the Horizon League Championship, coming out on the wrong end of a 1-0 decision despite giving up just five hits and striking out seven ... member of Horizon League Academic Honor Roll.

2014: Saw action in 35 games in the circle for the Crusaders as a sophomore, starting 21 times ... went 16-12 on the year with a 4.37 ERA and 120 strikeouts in 134.2 innings of work ... led the Horizon League with 35 appearances, finished second in the league in wins and third in strikeouts ... 16 victories marks the sixth-most in a single season in program history, while 120 strikeouts are eighth-most in a single season ... went 7-4 with a 2.46 ERA in Horizon League play, ranking second among league pitchers in league-only action in wins and opponent's batting average, third in strikeouts and fifth in ERA ... earned first win of season against UMass Lowell Feb. 9, striking out eight and giving up just three hits in 6.1 innings of work ... picked up victory with 5.2 innings of relief work Mar. 8 against Weber State, striking out nine ... turned season around with three hitless innings of action against #2/4 Oregon Mar. 13 ... registered four outs for a relief win the next day against BYU ... picked up victory with three innings out of the bullpen in Crusaders' Horizon League opener at Youngstown State Mar. 22 ... starting Mar. 30 at UIC, registered wins in five straight appearances and seven of her next eight outings ... tossed complete games in wins over UIC (Mar. 30), Eastern Michigan (Apr. 2) and Detroit (Apr. 5), tossing a two-hitter while striking out a season-best ten batters in the latter game ... tallied wins in both halves of an Apr. 8 twinbill versus Northern Illinois ... struck out eight in complete-game effort against Cleveland State Apr. 12 ... earned lone save of season Apr. 19 with shutout seventh inning in one-run win over Oakland ... tossed six innings and gave up just one unearned run in victory at Western Illinois Apr. 22 ... struck out nine in 5.2 innings of shutout ball to pick up the win Apr. 26 against Wright State ... earned two victories at the Horizon League Championship, including a complete-game three-hitter against host Wright State May 7 ... member of the Horizon League Academic Honor Roll.

2013: Enjoyed one of the most dominant seasons by a pitcher in Crusader history as a freshman ... a Second Team All-League and an All-Newcomer Team honoree ... went 21-12 with six saves, a 2.43 ERA and 234 strikeouts in 195.2 innings pitched ... set a new program single-season record for strikeouts while also pacing the Horizon League in the category ... ranked 30th nationally in strikeouts per seven innings ... appeared in a school-record 46 games ... also moved onto Valpo's single-season charts in wins (2nd), saves (2nd), innings pitched (3rd) and opponents' batting average (.212, 9th) ... led the league in saves and ranked fifth nationally ... also ranked second in the league in wins and innings pitched, third in opponents' batting average and fifth in ERA ... went 8-4 in league-only play with a 1.83 ERA and 81 strikeouts, ranking among the top-three in the league in all categories ... opponents hit just .193 off her in league action ... named Pitcher of the Championship and a member of the All-Tournament Team at the HL Championship ... earned three of Valpo's five tournament wins, appearing in five games and striking out 18 batters ... opened career with tough-luck loss at Belmont Feb. 9, surrendering just one earned run in eight innings while striking out six ... named Horizon League Pitcher of the Week for the first time Mar. 5 after earning wins in all three appearances the previous week with a 0.88 ERA ... threw a complete-game two-hitter with seven strikeouts against UNC Wilmington (Mar. 1), a complete-game four-hitter with eight strikeouts at Charleston Southern (Mar. 2), and six innings of no-hit ball at Charleston Southern (Mar. 3) ... had day to remember Mar. 8 ... entered in relief in opener against Fairleigh Dickinson and struck out the side in the seventh for her first career save ... made start later that day against Colgate and threw a one-hitter, striking out 17 batters ... 17 K's was the most by a Crusader pitcher in at least 12 years ... made four straight appearances in league play Mar. 30-Apr. 2 without giving up a run ... went 3-1 with a save over those four outings, highlighted by start Apr. 1 versus Wright State ... threw a three-hit shutout against the Raiders and struck out 12 hitters, including each of the game's first nine batters ... tossed two-hit shutout Apr. 21 at Detroit, striking out eight in run-rule shortened game ... named league Pitcher of the Week for a second time May 6 for her performances the final week of the regular season ... went 4-0 with a save over the final week of the season, posting a 0.26 ERA in 26.2 innings of work, striking out 34 batters against just six walks and allowing opponents to hit just .163 ... broke Valpo's single-season strikeout record during complete-game shutout of Western Michigan in the nightcap Apr. 30, striking out 10 overall on the game ... tossed four-hit shutout with 11 K's in series opener against Youngstown State May 4 ... returned in the nightcap in relief and earned win in marathon game, allowing just one run on three hits in 8.2 innings, striking out seven ... allowed just one run in complete-game wins over UIC (May 9) and Youngstown State (May 11, opener) during Horizon League Championship ... also picked up win in tournament finale against the Penguins ... went the distance in Valpo's first-ever NCAA Tournament win as the Crusaders downed Central Michigan May 18, scattering 10 hits while striking out nine ... returned later that day against a top-20 California squad and threw two shutout innings in relief, striking out four ... named an NFCA All-America Scholar Athlete.

Prep: A three-year letterwinner for the Porters ... named Second Team All-State by both the ICA and the Chicago Tribune as a senior ... set school record for strikeouts in a single season (272) as a senior in 2012 ... helped pitch the Porters to multiple conference and regional championships ... earned All-Area and All-Conference honors as a senior ... named the Herald News Player of the Year in 2012 ... two-time Pitcher of the Year selection by the Old Timers Baseball Association of Will County ... played ASA with the Homer Hawks/A's 18U Gold team in 2012 which finished third at the Triple Crown Nationals.

Personal: Taylor is the daughter of Kurt and Pam Weissenhofer ... major is actuarial science with a minor in business administration ... has been named to the Dean's List during her time at Valpo ... born August 8, 1994.