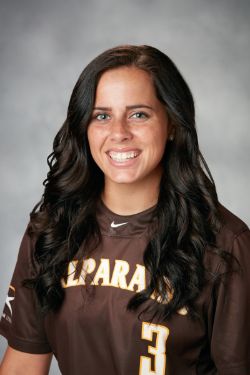 2015: After serving solely as a pitcher over her first two years, primarily played at third base as a junior ... appeared in all 51 games, starting 50 times ... made 49 of her starts at third base, while making one start and two relief appearances in the circle ... hit .315 with 18 runs scored and 14 RBIs on the year ... posted a .397 on-base percentage in Horizon League-only play ... posted nine multi-hit games on the year ... played a strong defensive third base as well, committing just six errors and recording a .957 fielding percentage ... finished tied for fifth in league-only play in defensive assists ... recorded first career hit and first career RBI Feb. 7 against IPFW ... tallied two hits in as many at-bats against Mercer later that same day ... went 2-for-4 with two runs scored against Albany Mar. 13 ... recorded a perfect 4-for-4 day at the plate in opener of twinbill against Wright State Mar. 28 ... followed with 2-for-3, two-run effort in the nightcap against the Raiders, connecting on a pair of doubles ... drew a pair of walks and scored a run in nightcap at Wisconsin Apr. 8 ... tallied two hits in three consecutive games as part of five-game hitting streak Apr. 25-May 2 ... went 2-for-3 with two RBIs in series opener against Youngstown State May 1 ... kicked off Horizon League Championship by going 2-for-4 with a run scored and an RBI May 6 in win over Wright State ... member of Horizon League Academic Honor Roll.

2014: Saw action in 33 games in the circle for the Crusaders as a sophomore, starting 22 times ... ended the season 4-14 with a 4.12 ERA and 56 strikeouts in 110.1 innings of work ... ranked third in the Horizon League in pitching appearances and saves (2) and tenth in innings pitched ... opened season with three shutout innings out of the bullpen Feb. 7 against IPFW ... recorded save as she tallied the final two outs in a win over UMass Lowell Feb. 9 ... surrendered just two earned runs in complete-game effort Feb. 15 against Boston College ... went the distance and gave up just one run on five hits Mar. 2 versus UT-Arlington ... earned first win of season later that day in relief against Longwood ... struck out season-high six batters versus Weber State Mar. 7, a mark she would match Apr. 5 in a win over Detroit ... went the distance against the Titans, surrendering just two hits to earn the shutout victory ... earned another complete-game win in Horizon League play over Cleveland State on Apr. 12 ... picked up league win over Oakland, giving up just one run in six innings of work, on Apr. 19 ... did not allow an earned run in five innings in Crusaders' win at Western Illinois Apr. 22 ... threw two perfect innings to earn the save in the regular season final May 4 at Green Bay ... member of the Horizon League Academic Honor Roll.

2013: Made 31 appearances in the circle, including 19 starts, during her freshman year at Valpo ... finished the season with an 11-10 record and a 3.88 ERA ... struck out 64 batters in 113.2 innings of work ... ranked seventh in Horizon League in wins, eighth in innings pitched and tenth in strikeouts ... earned first career win in first career start, going the distance and surrendering just two runs Feb. 9 against Jackson State ... named HL Pitcher of the Week for that effort ... tossed six innings of shutout softball in 1-0 win over Fairleigh Dickinson Mar. 8 ... had perhaps most impressive outing of season Mar. 13 versus Maine, throwing a two-hitter with five strikeouts ... earned another victory Mar. 17 over Cornell, surrendering just one earned run in 5.1 innings while striking out five ... named HL Pitcher of the Week for a second time Mar. 18 after going 2-0 with a 0.91 ERA in 15.1 innings over the previous week ... threw complete-game five-hitter to earn win against UIC Apr. 14, giving up just one run and striking out five ... entered in relief and threw 3.1 shutout innings Apr. 30 in opener at Western Michigan, picking up the win ... registered victories in both games on next-to-last day of Horizon League Championship ... threw 2.2 innings of no-hit relief against Cleveland State May 10, striking out four as Valpo won in extra innings ... started later that day against Wright State, going the distance and giving up just two runs ... struck out a season-high six batters in helping Crusaders reach Championship Saturday ... closed out tournament-clinching victory over Youngstown State May 11 by setting down the side in order in the seventh inning, finishing up with a strikeout ... named an NFCA All-America Scholar Athlete.

Prep: A four-year letterwinner for the Longhorns ... earned First Team All-State honors as a senior and was named league Pitcher of the Year ... posted a 1.74 ERA and struck out 159 batters in 125 innings ... closed prep career with 699 career strikeouts ... a Second Team All-State selection as a junior ...  placed on First Team All-Conference in each of her final three years, and was also team MVP all three seasons ... named to adidas Top 100 Futures Team in 2011.

Personal: Sierra is the daughter of Shawn and Efrain Pico ... major is nursing ... has been named to the Dean's List during her time at Valpo.