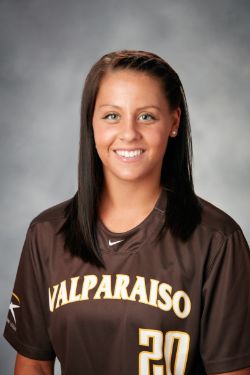 2015: Made 33 appearances in the circle as a junior, starting 16 games ... posted an 8-12 record with a 6.81 ERA ... struck out 68 batters in 111 innings of work ... also went 6-for-41 with five runs scored and three RBIs at the plate ... earned first win of season with 5.1 innings of one-run ball in Feb. 8 victory over IPFW ... earned win in next start as well, tossing five innings and not surrendering an earned run in Feb. 21 win over Alabama State ... struck out five and gave up just one hit in four innings of relief work Mar. 14 versus Albany ... picked up win later that same day against Niagara, tossing four shutout innings ... recorded save in Valpo's finale at Rebel Spring Games Mar. 15 against Saint Peter's with 1.2 innings of hitless softball ... connected on first career home run in opener of doubleheader at Wisconsin Apr. 8, a two-run round-tripper ... scattered eight hits in eight innings of work to earn win in Horizon League action at Cleveland State Apr. 18 ... earned three wins in as many appearances in league play Apr. 25-May 2 - one at Detroit and two against Youngstown State ... struck out a season-high seven batters in May 1 complete-game win over the Penguins ... earned start in Horizon League Championship opener May 6 versus Wright State and went the distance, giving up just one run in earning the win.

2014: Went 3-6 with four saves, a 4.47 ERA and 73 strikeouts in 103.1 innings of work in her first season at Valpo ... led the Horizon League in saves and ranked eighth in the league in strikeouts ... save total was good for a tie for 12th nationally as well ... moved into sixth in the Crusaders' single-season record book in saves, as well as ninth in pitching appearances (33) ... earned complete-game win in first career start Feb. 8 against Seton Hall, throwing a two-hitter ... recorded 7.2 innings of shutout ball over a pair of relief appearances Mar. 9, against Indiana and at Boise State ... started game against the Broncos at DP, going 1-for-1 and drawing two walks at the plate ... registered career-best 11 strikeouts out of the bullpen Apr. 2 versus Eastern Michigan ... tossed shutout in Horizon League play against Detroit Apr. 6 ... two days later, picked up first career save with three shutout innings against Northern Illinois ... save in nightcap against the Huskies came after she scored a walk-off run as a pinch-runner in the day's first game ... would go on to post four saves in a seven-appearance stretch ... recorded saves in both halves of doubleheader sweep at Western Illinois Apr. 22 ... registered another save in league play Apr. 26 at Wright State ... earned win with two hitless innings in Horizon League Championship opener against UIC May 7 ... started against the Flames two days later and surrendered just two earned runs in 7.2 innings while striking out nine in an eventual Crusader win.

Prep: A four-year letterwinner for the Hawks ... a First Team All-State selection by the ICGSA as a senior ... played for the North team in the 2012 Indiana All-Star game ... three-time conference MVP ... First Team All-Area choice as a junior, helping to lead Hebron to its first-ever regional championship and a berth in the semistate final ... helped the Hawks capture a pair of sectional titles ... holds school records for most no-hitters and most career doubles ... played ASA with Orland Park A's 18U Gold and Illinois Outlaws 16U ... also played volleyball and ran cross country.

Personal: Mollie is the daughter of Tom and Sherri Lindeman ... major is sociology with a concentration in criminology.