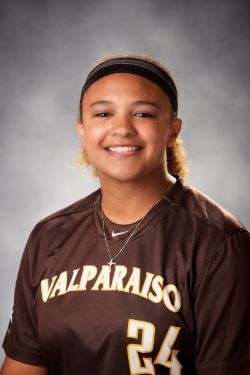 2016: Appeared in 49 games during her junior year, making 44 starts - 35 at catcher, eight at third base and one at designated player ... hit .270 with 17 runs scored and 33 RBIs ... drew 19 walks and connected on seven home runs, posting an on-base percentage of .381 and a slugging percentage of .504 ... led team in home runs and ranked second on the squad in slugging percentage ... enters senior year tied for ninth in program history in career home runs ... posted 10 games with multiple RBIs and had seven multi-hit games ... named Most Valuable Player of the Horizon League Championship and was named to the All-Tournament Team ... went 5-for-12 at the plate with four walks and six RBIs over the Crusaders' four tournament wins ... also caught every inning behind the plate ... went 2-for-3 with two walks and three RBIs in the tournament-opening win over Youngstown State May 11 ... drove in lone run of the game with an RBI double and also drew two walks in May 13 win over UIC ... went 2-for-4 with a pair of RBIs on a two-run single which forced extra innings in the title game against Wright State ... hit first home run of season Mar. 4 versus SIU Edwardsville ... went 2-for-3 with a home run, two runs scored and two RBIs Mar. 5 versus Elon ... connected on two-run homer against Utah State on Mar. 11 ... delivered two-run homer Apr. 5 in league play against Green Bay ... drove in multiple runs in four consecutive Horizon League games Apr. 23-May 1 ... delivered two-run home run in middle game of series with Detroit Apr. 23 ... went 2-for-3 with four RBIs in series finale later that day versus the Titans ... drove in two runs apiece in first two games of series against Oakland, including a 3-for-3, two-run, two-RBI performance with a home run in the middle game of the series ... recorded a no-doubt home run in series opener at Wright State May 6 ... scored a pair of runs in the opener against the Raiders on May 7 as the Crusaders clinched a berth in the league tournament ... member of Horizon League Academic Honor Roll.

2015: Appeared in 28 games as a sophomore, starting eight times - six times at catcher and twice at designated player ... went 8-for-39 at the plate with 10 RBIs ... hit three home runs, fourth on the team ... picked up hit in season opener Feb. 6 against Jacksonville State ... connected on a three-run homer Mar. 15 in win over Saint Peter's as part of a 2-for-3, four-RBI performance ... hit a pinch-hit home run in Horizon League play Mar. 21 against Green Bay ... drilled a go-ahead, pinch-hit three-run home run in eventual league win at Cleveland State Apr. 18 ... tallied run-scoring hit in Horizon League Championship opening win over Wright State May 6, and also drove in a run as a pinch-hitter the next day against the Raiders ... member of Horizon League Academic Honor Roll.

2014: Saw action in 49 games, including 47 starts, in her freshman season at Valpo ... started 28 times as the Crusaders' designated player and 19 times at third base ... hit .211 on the year with 17 runs scored and 21 RBIs ... drew 18 walks, ninth-most among all Horizon League players ... recorded five multi-hit games and drove in multiple runs four times ... enjoyed huge game against Seton Hall on Feb. 8, going 3-for-4 with four runs scored, a home run (the first of her career) and four RBIs ... her four runs scored matched a program single-game high dating back to at least 1998 ... went 2-for-4 with a double and three RBIs against Central Arkansas on Feb. 15 ... drew a pair of walks at Hawai'i Mar. 12 ... reached base in eight consecutive games Mar. 22-Apr. 5, including a streak of four straight games with a walk and a five-game hitting streak ... connected for a home run and three RBIs in Apr. 8 win over Northern Illinois ... homered in back-to-back Horizon League games versus Oakland Apr. 18-19 ... drove in three runs and tallied a pair of hits in series opener against the Golden Grizzlies.

Prep: A two-year letterwinner with the Griffins ... an All-Conference and All-Area selection as a junior in 2012, helping to lead the Griffins to a conference championship ... also earned All-State Special Mention ... played ASA for the Orland Park A's (2010-2013) and Lincoln-Way Storm (2007-2010) ... also played basketball at Lincoln-Way East.

Personal: Sam is the daughter of Lance and Suzette Stewart ... major is nursing.