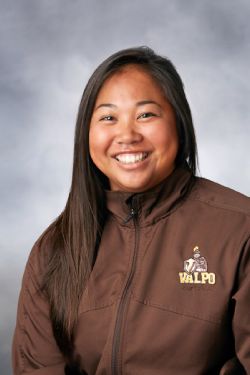 Joylyn Ichiyama joined the Crusader coaching staff in the summer of 2013, following the completion of her eligibility at Valpo, and enters her second season as an assistant coach in 2015.

Ichiyama was appointed acting head coach in late April of the 2014 season and ended her stint with a 4-5 record.  She led the Crusaders to three victories at the Horizon League Championship, including a pair of walk-off wins, as Valpo advanced to the league championship game for the third straight season.

In her first season as a member of the Crusader coaching staff, Ichiyama helped guide Valpo to 24 victories and a third-place finish in the Horizon League during the regular season.  Along the way, three Crusaders earned All-League honors, while Kaitlyn Ranieri was tabbed the league's co-Player of the Year.

A two-time First Team All-Horizon League honoree, Ichiyama ranks as one of Valpo's all-time best players, both at the plate and in the field.  A key cog in the Crusaders' Horizon League champion and NCAA Tournament teams in 2012 and 2013, she closed out her career second in program history in games played and RBIs, as well as third all-time at Valpo in hits and total bases.

In the field, Ichiyama earned Defensive Player of the Championship honors at the 2012 Horizon League Championship while manning third base.  The native of Torrance, Calif. finished her career as Valpo's career and single-season record holder for assists.

Ichiyama earned her bachelor's degree in exercise science from Valparaiso in 2012.  She is currently working towards her master's degree in health administration.  Ichiyama has one son, Jayden Drewry.