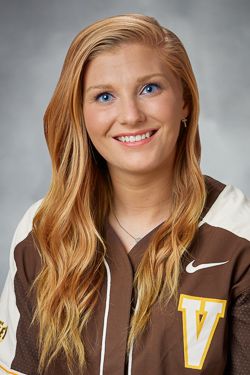 2020: Made 10 appearances in the circle, starting eight games ... went 2-4 with one save and a 2.62 ERA ... team posted a 5-3 record in her eight starts ... struck out 33 batters in 40 innings pitched ... ranked fourth in the MVC in opponents' batting average (.219) and ninth in ERA ... picked up first victory over year Feb. 8 against defending A-10 champion Fordham, giving up two earned runs in 5.2 innings of work ... surrendered one earned run in 4.2 innings while striking out five in start against Robert Morris Feb. 14 ... entered in relief to pick up one-out save Feb. 29 to close out win over Bethune-Cookman ... earned win over Stetson the next day, giving up just two hits and an unearned run in 3.2 innings ... posted season-high seven strikeouts in back-to-back outings March 6 against Niagara and March 7 versus Longwood ... gave up just two hits and an unearned run in 5.2 innings out of the bullpen in the latter game ... struck out six in just 3.2 innings of work in March 8 start against Cleveland State.

2019: Appeared in 33 games in the circle as a junior, starting 21 times ... threw 12 complete games ... posted a 7-19 record and two saves with a 4.93 ERA ... struck out 113 batters in 143.1 innings of work ... ranked sixth in the MVC in strikeouts and seventh in innings pitched ... became staff workhorse during MVC play, appearing in 20 of Valpo's 26 conference games, including 15 starts ... earned first career win March 2 against College of Charleston with 2.2 innings of relief work ... came out of bullpen March 10 against Buffalo went 5.2 innings of shutout softball, stirking out six to earn win ... picked up save  March 27 against IUPUI with two shutout innings ... threw complete-game five-hitter for win over Missouri State April 1, allowing just two runs while striking out a season-high 10 - a mark she would match in series opener against Illinois State May 3 ... picked up victory in non-conference play April 3 at UIC with five innings of three-hit ball ... came out on wrong end of 1-0 decision against eventual MVC champion Drake April 6, giving up just three hits while striking out seven ... named MVC Newcomer of the Week May 6 after throwing two complete games against Illinois State, posting a 1.00 ERA in 14 innings of work, striking out 17 batters and allowing Illinois State to hit just .180 off of her ... threw a 148-pitch shutout in MVC Tournament opener to give Valpo win over Evansville May 8, scattering six hits while striking out six ... named to the MVC All-Tournament Team.

Chattanooga State C.C.: An All-Conference honoree as a sophomore in 2018 ... recorded 17 wins and tallied 154 strikeouts in 148 innings of work.