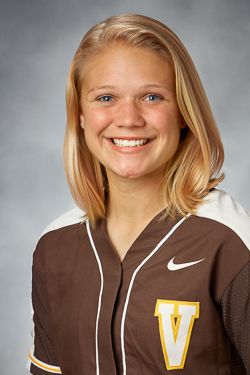 2020: Started all 19 games as a sophomore ... made 13 starts at third base, four at shortstop and two at second base ... hit .163 (8-for-49) with nine runs scored and nine RBIs ... five of her eight hits went for extra bases, including three home runs to share team-high honors ... posted a .408 slugging percentage ... reached base five times via hit by pitch, fourth-most in the MVC ... ranked fifth defensively in The Valley with 41 assists ... opened season by going 2-for-4 with two runs scored, two RBIs and a home run in win over defending A-10 champion Fordham Feb. 7 ... connected on homer in win over Colgate Feb. 15 ... drove in a pair of runs in Feb. 29 win over Bethune-Cookman ... reached base twice via hit by pitch and scored two runs in win at Stetson March 1 ... reached base three times March 7 against North Carolina A&T, connecting on a solo homer and drawing a pair of walks.

2019: Started all 47 games in the outfield in her rookie season at Valpo ... hit a team-high .280 with 19 runs scored and 14 RBIs ... became just third Valpo freshman in the last 18 seasons to lead team in batting average ... posted a .351 on-base percentage and a .398 slugging percentage ... also stole a team-high 13 bases while being caught just twice ... opened career Feb. 8 against Stephen F. Austin, going 1-for-2 with a run scored and a stolen base ... swiped two bases against Middle Tennessee State later that day ... also stole multiple bases March 2 against College of Charleston and March 10 versus Buffalo ... hit an inside-the-park home run for her first career round-tripper as part of 2-for-4, 2-run effort against Wright State Feb. 24 ... went 2-for-2 with a walk and two RBIs March 2 against Charlotte, highlighted by her first conventional home run ... picked up three hits March 16-17 at Bradley in first MVC series, including a pair of doubles ... connected on a two-run homer late March 27 against IUPUI for a pair of insurance runs in win ... named MVC Newcomer of the Week April 1 based on her performance in the win over the Jaguars ... went 2-for-3 with two runs scored and an RBI in April 17 win over Western Michigan ... tallied season-high three hits in series finale at Evansville April 28 ... went 2-for-3 with a steal in regular season finale against Illinois State May 4 ... helped Valpo to win in MVC Tournament opener over Evansville May 8, reaching base three times, scoring a run and tallying an RBI.

Prep: A First Team All-State honoree as a senior ... led team to berth in state championship game and sectional title as a senior in 2018 ... helped team capture regional titles in each of her final three years ... earned First Team All-County honors in each of her four years and was county Co-Player of the Year in 2018 ... First Team All-Conference in 2016 and 2018; Second Team in 2017 ... played travel ball for the prestigious Beverly Bandits program, hitting nearly .400 in the summer of 2017 ... member of Bandits squad which claimed the 2016 PGF national championship in Huntington Beach, Calif.