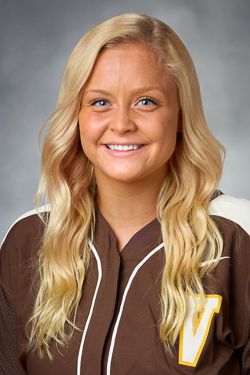 2020: Made nine appearances in the circle for Valpo, starting eight times and making one relief appearance ... also started three games at designated player and pinch-hit on one occasion ... went 4-4 with a 2.17 ERA, striking out 63 batters in 51.2 innings of work ... ranked third in the MVC in strikeouts, seventh in ERA, eighth in innings pitched and ninth in opponents' batting average (.230) ... surrendered two or fewer earned runs in six of her eight starts ... became member of batting order as well after not hitting in her first two seasons at Valpo ... finished year hitting .240 (6-for-25) with one run scored and two RBIs ... posted a .440 slugging percentage, second-best on the team ... debuted with complete-game win over defending A-10 champion Fordham Feb. 7, striking out a career-high 12 batters ... surrendered just one earned run in seven innings versus Northwestern State Feb. 8 while picking up first career hit at the plate ... notched base hit as a pinch-hitter versus Robert Morris Feb. 14 ... later that day, struck out 11 in complete-game win at Gardner-Webb ... gave up just one run on two hits while striking out 11 more batters the next day in one-run win over Colgate ... named MVC Pitcher of the Week Feb. 17 for her efforts versus Gardner-Webb and Colgate, the third weekly honor of her career ... took tough-luck loss in international tiebreak against Saint Louis March 6 despite not giving up an earned run in 8.1 innings, scattering seven hits and matching career high with 12 strikeouts ... also reached base twice at the plate against the Billikens, picking up a hit and a walk ... connected on first career home run March 7 against North Carolina A&T and drew a walk as well ... sent March 8 game against Cleveland State to extra innings with RBI double in the bottom of the seventh, her second two-bagger of the game ... went on to earn win in the circle, recording the final out of the top of the eighth before Valpo walked off in the bottom of the frame.

2019: Appeared in 18 games in the circle as a junior for Valpo, starting 14 times, before suffering a season-ending injury ... granted a medical hardship waiver and retains two seasons of eligibility ... posted an 8-7 record on the year with a 3.24 ERA ... struck out 88 batters in 84.1 innings of work and allowed opponents to hit just .227 against her ... ranked sixth in the MVC in opponents' batting average, ninth in ERA and 10th in strikeouts ... opened season with nine strikeouts in eight innings in tough-luck extra-innings loss against Middle Tennessee State ... earned first win of season Feb. 22 against Delaware State with 1.1 innings of shutout relief ... tossed four-hit shutout with seven strikeouts Feb. 24 over Princeton ... threw her first Division I no-hitter against Wagner ... game started with three innings March 1 before being suspended and resumed two days later, when she closed out the no-no with two flawless innings in run-rule win ... earned save March 2 in victory over College of Charleston, throwing 2.1 shutout innings and striking out five ... tossed complete-game two-hitter, striking out seven, in March 2 win at Charlotte ... led way as Valpo earned just its third win in program history over an ACC program March 5, as Crusaders shut out NC State, 4-0 ... entered game with two on and nobody out in the third inning, got out of the frame unscathed, and went on to throw five shutout innings, allowing just three hits while striking out six ... followed with another impressive outing March 10 at Lipscomb, throwing a career-high 10 innings of four-hit ball while striking out nine in a 2-1 victory ... capped game by keeping Lipscomb off the scoreboard in three international tiebreak innings ... named MVC Pitcher of the Week March 11 for her efforts against NC State and Lipscomb ... picked up complete-game win in MVC play at Bradley March 17, scattering six hits and striking out six ... earned final win of season March 27 over IUPUI with five innings of two-hit ball.

2018: Missouri Valley Conference Newcomer of the Year and a Second Team All-MVC selection ... made 23 appearances in the circle in her first year as a Crusader, starting 15 times ... went 8-5 with a 2.68 ERA in 102 innings of work, striking out 111 batters ... finished year sixth in the conference in strikeouts ... stood out in MVC play, going 6-3 with a 1.78 ERA and striking out 78 batters over 67 innings in conference action ... ranked third in the MVC in conference-only play in opponents' batting average (.216), fourth in ERA and fourth in strikeouts ... debuted for Valpo by giving up just one earned run in three innings against SIUE Feb. 9 ... tossed two shutout innings out of the bullpen at Indiana State in nightcap March 17 ... earned victory in first start in MVC play, scattering seven hits and giving up just one run in opener at Missouri State March 24 ... struck out six in start against Southern Illinois March 30, kicking off a stretch of 10 straight appearances with at least five strikeouts - the most by a Valpo pitcher in program history ... earned shutout win over Fort Wayne April 11, striking out eight ... tallied seven strikeouts in start against Drake April 15 ... recorded first double-figure strikeout effort of her career in opener against Evansville April 21, notching 10 K's in the tough-luck loss ... threw 3.2 innings of no-hit relief against the Purple Aces the next day, striking out five ... shut out Loyola on the road April 24 in opener of twinbill, striking out a career-best 11 hitters while scattering five hits ... win over the Ramblers started a string of wins in each of her last five MVC starts of the year ... surrendered just one run over two complete-game wins over Bradley April 28-29 against a Braves team which entered the series averaging 5.5 runs/game in conference action ... allowed one run while striking out seven in a 2-1 victory in the series opener, and then capped the series with a six-hit shutout, striking out nine, in a 1-0 win ... named MVC Pitcher of the Week and Newcomer of the Week April 30 for her efforts against the Ramblers and the Braves ... tossed a one-hit shutout with five strikeouts in win at Illinois State in opener May 5 ... came back the next day with another complete-game win over the Redbirds, giving up just one run and striking out six ... picked up victory in the Crusaders' first-ever MVC Tournament game, going 6.2 innings and stirking out six in a 3-2 win over Indiana State ... tossed three shutout innings in tournament finale against Drake, striking out four while giving up just one hit ... named to the MVC All-Tournament Team.

2016-2017 (Rock Valley College): Rock Valley claimed national championships in each of her two seasons on the roster ... named NJCAA Division III Pitcher of the Year and an NFCA NJCAA Division III First Team All-American in 2017 ... also a First Team All-District and First Team All-Conference selection ... posted a 23-0 record with a 1.29 ERA and struck out 209 batters in 130.2 innings of work ... led the nation in strikeouts, ranked second in both wins and ERA, third in shutouts (five) and fourth in opponents’ batting average (.135) ... a two-time selection as NJCAA Division III National Pitcher of the Week ... threw two no-hitters as a sophomore ...  registered two shutout victories at the National Championship to help the Golden Eagles claim the title – the program’s fourth consecutive national crown – including a four-hit, nine-strikeout shutout of Herkimer to send RVC to the championship game ... missed most of freshman year due to injury ... granted a medical hardship waiver for her freshman season.