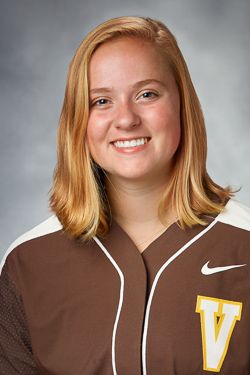 2020: Made six appearances off the bench as a sophomore, pinch-hitting three times and pinch-running on the other three occasions ... tallied run-scoring single in pinch-hit effort in March 1 win at Stetson ... scored run as a pinch-runner in the international tiebreak in the ninth inning against Niagara March 6, extending the game in an eventual Valpo win.

2019: Appeared in six games off the bench as a freshman ... went 2-for-6 with an RBI and a double ... recorded run-scoring double for first career hit March 1 against Wagner ... also picked up a base knock April 3 at UIC.

Prep: A Second Team All-Conference honoree as a senior ... hit .364 with a .426 on-base percentage and threw out 64% of runners attempting to steal against her ... played travel ball for Team Glory Fastpitch, where she was coached by former Crusader Maggie Seidel ... helped team reach PGF Nationals twice.