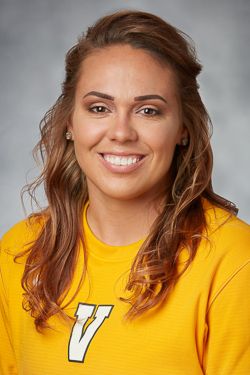 Monica Wright joined the Valparaiso softball coaching staff as an assistant coach in July of 2015 and was promoted to associate head coach in June of 2017.

The truncated 2020 campaign featured a strong performance by the Valpo pitching staff, as the Crusaders led the Missouri Valley Conference in opponents' batting average and ranked third in ERA. Valpo placed three pitchers among the conference's top-nine in both ERA and OBA, while Kelsie Packard returned to form, finishing the year third in the MVC in strikeouts.

The impact of Wright's work with the Valpo pitchers has been immediate and impressive. From 2015 to 2018, the ERA of Valpo’s pitching staff dropped by over four runs per game, while opponents hit over 100 points in 2018 than they were the season before Wright’s arrival. The Crusaders also issued over 40% fewer walks and allowed nearly 45% fewer home runs in 2018 as compared to 2015.

Wright led the Crusader pitching staff to its lowest ERA since 2012 and its highest strikeouts/7 innings rate since 2008 in 2018, an impressive feat considering the program jumped from the Horizon League to the Missouri Valley Conference - which finished the 2018 campaign ranked 12th in the nation in conference RPI. The Crusaders posted the MVC's second-best team ERA, trailing only conference champion Drake. Individually, she coached Kenzie Grossmann to 13 wins and a 1.75 ERA, the lowest ERA by a Crusader pitcher since 1990, while under her tutelage, Kelsie Packard went 6-3 with a 1.78 ERA in MVC play in her first year as a Crusader and was named the MVC Newcomer of the Year.

Wright guided Grossmann in her first season as a Crusader in 2017 to a Horizon League-best 20 victories, as Grossmann finished the year 20-12 with a 3.05 ERA and 120 strikeouts. Grossmann’s 20 wins ranked third in a single season in program history, while she also cracked Valpo’s single-season top-10 in strikeouts.

In her first season at Valpo in 2016, Wright's work with Valpo's pitchers paid dividends as the Crusaders claimed the Horizon League Championship and earned a berth in the NCAA Tournament. Wright coached Taylor Weissenhofer to Second Team All-League accolades as she closed out her career as the program's all-time leader in strikeouts. Weissenhofer was also selected as the Pitcher of the Tournament at the Horizon League Championship as Crusader pitchers posted a 1.69 ERA in the team's four wins in their remarkable run to the league title.