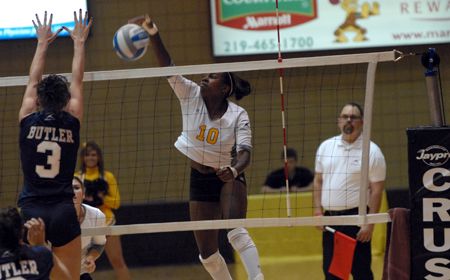 Malicoat was named Horizon League Defensive Player of the Year for a second straight season after finishing second in the league and 13th in the nation with 5.22 digs/set.  Her 621 total digs on the season were third-most in a single year in Crusader history and she closed her career with a school-record 2,306 digs, among the top-20 in the category in NCAA history.  The senior posted double digits in digs in 31 of Valpo’s 32 matches, including at least 20 digs of 14 occasions, and received All-Tournament honors at Notre Dame’s Shamrock Invitational and Indiana’s adidas Classic.

Porché was named the Horizon League Player of the Year for 2008 and earned a repeat spot on the All-League squad.  The junior paced the Horizon League and ranked seventh in the nation with 4.61 kills/set on the season, finishing the 2008 campaign with 553 kills, third-most in a single year in Valpo history.  She also broke Crusader career records for both kills and attacks midway through the season and now has 1,617 career kills.  The MVP of Notre Dame’s Shamrock Invitational, Porché also earned All-Tournament accolades at Indiana’s adidas Classic.  She has reached double figures in kills in 54 straight matches, including all 31 she appeared in this year, and posted 20 double-doubles on the season.