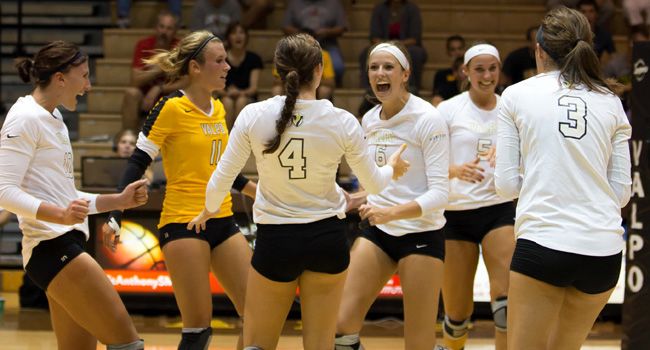 This Week in Crusader Volleyball: The Valparaiso volleyball team competes in its final early-season tournament this weekend as the Crusaders travel to Bloomington to take part in Indiana’s Hoosier Classic. Valpo faces the host Hoosiers Friday evening before taking on Miami (Ohio) and UT-Chattanooga on Saturday.

Previously: The Crusaders split four matches last week, starting with a Tuesday night home win over Illinois State in their first match of the year at the ARC. Valpo then traveled to Morehead State, falling to the host Eagles (3-2) and to Missouri (3-0) while defeating Savannah State (3-0). Morgan Beil was named to the All-Tournament Team.

Next Up: Horizon League play starts up next weekend for Valpo on the road, but with just a pair of short road trips up to Chicago. The Second City swing begins Friday evening at UIC, with a Saturday afternoon contest at Loyola closing the weekend.

Following the Crusaders: Live stats for all three of this weekend’s matches will be available through www.valpoathletics.com. In addition, live audio for the match against the Hoosiers can be found through Indiana’s website.

Head Coach Carin Avery: Over her 10 years as head coach, Carin Avery has won 243 matches and has led Valpo to three league regular season and tournament titles, as well as three NCAA Tournament appearances. A two-time league Coach of the Year, Avery has coached 42 All-League recipients over her tenure as Crusader head coach. She is Valpo’s all-time leader in both victories and winning percentage, and now owns 301 career victories overall.

Series Notes: Valpo has faced two of its three opponents this weekend on the volleyball court, the exception being it will be the Crusaders’ first meeting with UT-Chattanooga. The Crusaders are 0-4 all-time against Indiana, with the last meeting being a 3-0 Hoosier win in a tournament Indiana hosted in 2008. Valpo owns a 2-3 mark against Miami (Ohio), but has downed the RedHawks in each of their last two meetings, most recently a 3-1 win in Normal, Ill. in 2007.

Scouting the Opposition: Indiana enters the weekend at 6-3, but went just 1-2 last weekend, defeating Western Illinois and losing to Stephen F. Austin and Butler. Junior outside hitter Jordan Haverly averages better than four kills/set for the Hoosiers. Miami is 4-6 on the year, but went 3-0 last weekend against Indiana State, Chicago State and Temple. The RedHawks are led by Meg Riley, who averages 3.55 kills/set on .250 hitting and also dishes out 4.68 assists/set. Chattanooga is 6-6 on the season, most recently downing Alabama State on Tuesday. Paula Passmore averages 6.44 digs/set as the Mocs’ libero.

Down a Set? No Problem: Two of Valpo’s five victories in the early part of this season have come via sweep, but the other three have all required Crusader rallies. Valpo dropped the first set to both Illinois State and South Alabama before winning 3-1, and was down 2-1 after losing sets two and three to South Dakota State before earning a 3-2 win. But, on the flip side, three of the Crusaders’ four non-sweep losses have seen Valpo lose either a 1-0 (SEMO, Iowa) or 2-1 (Morehead State) lead.

Many Marks Set: Valpo’s sweep of Savannah State saw the Crusaders combine to set nine new career highs. The Crusaders’ top two attackers: Kelsey Victor (14) and Janelle Hobbs (11) both set career highs in kills, while on the back line, Chelsey Tekavec (12) and Sarah Chrabaszcz (8) picked up career-high dig totals. Tekavec set five career highs in all, while fellow rookie Kelsey Berrington dished out a career-best 38 assists. In addition, Hobbs hit at a .714 clip [11-1-14] for the match, the fifth-best percentage in a three-set match in program history.

Root on Record Watch: While senior libero Taylor Root already owns the Horizon League career digs record, she is still chasing Brittany Malicoat for Valpo’s career record in the category. Root, who picked up a season-best 32 digs in the five-set match against Morehead State, has now tallied 203 digs this year, bumping her career total to 2,220, just 89 digs shy of Malicoat’s record. Looking ahead, Root is also just 236 digs shy of the NCAA’s all-time top-10 in the category.