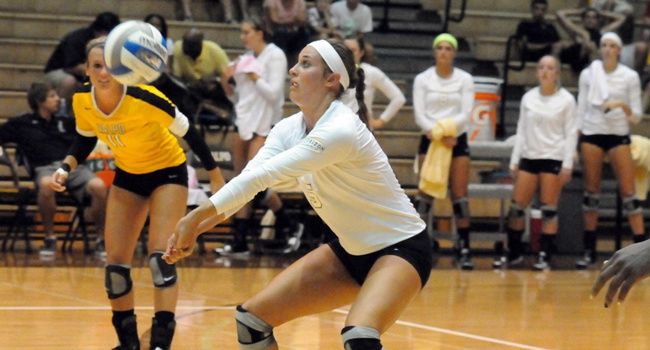 Valpo led early in the opening set at 4-3 following a kill by junior Sarah Dooms (Greenwood, Ind./Center Grove), but UIC scored five of the next six points to go ahead 8-5.  The Crusaders answered with three straight thanks to a kill by redshirt sophomore Lindsey Hauch (Coloma, Mich./Coloma) and two UIC errors, but the Flames went on a 7-1 run to take control.

A three-point spurt late in the set which included a kill from senior Mary Dent (Chicago, Ill./Von Steuben) and a service ace by junior Ellen Vanden Berg (Little Chute, Wis./Little Chute) closed Valpo to within 20-16, but the Crusaders were unable to string together back-to-back points the rest of the set as UIC took the opener.

A back-and-forth early going in the second set turned into a Valpo advantage, as the Crusaders strung together three straight points on a kill and ace from Vanden Berg and a Dent termination to go ahead 9-7.  The teams then proceeded to trade 12 consecutive sideouts before Valpo scored four straight, including two more kills from Dent, to take an 18-13 advantage.

Three consecutive kills from Dooms, sophomore Morgan Beil (St. Louis, Mo./Marquette) and redshirt sophomore Kelsey Victor (Logansport, Ind./Logansport) pushed the lead out to 21-14 as the Crusaders looked to close out the second frame.  UIC would score seven of the next ten points to move within 24-21, but on its third set point opportunity, Dooms and Vanden Berg teamed up for a block to send the match into the in-game break knotted at one set apiece.

A 5-0 run by the Flames approaching the midway point of the third set put UIC ahead 13-8, a margin which it would maintain through 19-14.  The Crusaders took advantage of a pair of Flame errors and a block by Dent and Victor to cut into the UIC edge, closing to 19-17.  But the Flames looked to have control, keeping a multiple-point lead and earning set point at 24-20.

But Valpo rallied to force extra points, getting kills from junior Janelle Hobbs (Hartland, Wis./Arrowhead) and Vanden Berg sandwiching a Dooms service ace to induce a timeout from UIC at 24-23.  Following the stoppage, the Flames were called for a double hit as the Crusaders tied the frame at 24-all.  But UIC closed out the set with consecutive kills to take a 2-1 lead into the fourth set.

The Crusaders led throughout most of the first half of the fourth set, but the Flames scored four straight points to turn an 11-10 Valpo lead into a 14-11 deficit.  Valpo scored three of the next four, including a kill and an ace by Dooms, to close back to within one point, but couldn’t re-take the lead until a Dooms kill and a pair of Flame errors put the Crusaders on top 20-19.

Momentum was hard to come by as the set neared its zenith, as UIC tied the frame with a kill and then answered terminations by Vanden Berg and Dooms with kills of its own to make it 22-all.  The Flames committed an attack error to again give the Crusaders a one-point edge at 23-22, but UIC posted back-to-back kills to earn the first match point chance at 24-23.  Hauch came up with a big kill to tie the set at 24-all and force extra points for the second straight set, but the Crusaders couldn’t push the match to a decisive fifth set, as UIC got a kill from Molly McCoy, who then combined with Janise Dismuke on a block to close the contest.

Dooms was the only Crusader to finish in double figures in the kill column, posting a season-best 15 kills to go along with 15 digs, as Valpo was out-killed by UIC, 62-52.  Berrington handed out 24 assists to go with 17 from junior Ariel Cudney (LaPorte, Ind./LaPorte).  Dooms also registered three of Valpo’s six service aces, while senior Taylor Root (Jenison, Mich./Jenison) paced the Crusaders with 22 digs, leaving her just 21 digs shy of Valpo’s all-time record in the category.

Valparaiso (8-7, 0-1 Horizon) closes out the league’s Chicago swing on Saturday afternoon with a 4 p.m. match at Loyola.  Live stats and live video through the Horizon League Network will be available at www.valpoathletics.com.