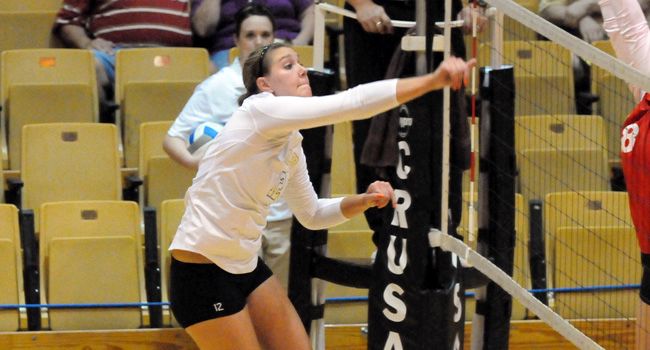 This Week in Crusader Volleyball: Valparaiso returns home for just the second time this year on Wednesday evening as the Crusaders host a non-league contest against South Dakota State. Two days later, Valpo kicks off a stretch of seven straight Horizon League matches at Wright State.

Previously: Valpo earned a split on the opening weekend of Horizon League play, falling at UIC on Friday night before winning at Loyola on Saturday afternoon, both in four sets. The pair of tight matches saw 73 total tie scores and 31 lead changes over the eight sets.

Following the Crusaders: Live video for both of this week’s matches will be available through the Horizon League Network, as well as live audio of the South Dakota State match on WVUR (95.1 FM, Valparaiso). Links to the audio and video webcasts, as well as live stats, can be found at www.valpoathletics.com.

Head Coach Carin Avery: Over her 10-plus years as head coach, Carin Avery has won 250 matches and has led Valpo to three league regular season and tournament titles, as well as three NCAA Tournament appearances. A two-time league Coach of the Year, Avery has coached 42 All-League recipients over her tenure as Crusader head coach. She is Valpo’s all-time leader in both victories and winning percentage, and now owns 305 career victories overall.

Series Notes: After meeting South Dakota State just once in program history prior to this season (a loss in 2006), the Crusaders and Jackrabbits are facing off for the second time this year, as Valpo earned a 3-2 win over SDSU earlier this year at the Hawkeye Challenge. Morgan Beil posted 12 kills in that match, with Ellen Vanden Berg and Kelsey Victor earning 11 apiece. Valpo is just 12-14 all-time against Wright State, but holds a 9-1 advantage since joining the Horizon League, including eight straight victories over the Raiders.

Scouting the Opposition: South Dakota State enters Wednesday’s match with a 10-4 mark on the season and sits at 3-1 in Summit League play. The Jackrabbits are led on both sides of the ball by middle Kelli Fiegen, who averages 3.09 kills/set on .365 hitting and 1.47 blocks/set. Wright State is just 2-17 this year, falling in four sets to both Loyola and UIC last weekend. Heidi Splinter averages a team-high 3.06 kills/set, while libero Katie Glassmeyer posts 4.28 digs/set.

Playing Tight Sets: The Crusaders’ first two Horizon League matches of the year featured a number of tight sets as Valpo split the weekend contests. Four of the eight sets went to extra points, while the lowest number of points scored by the losing team in a single set was 20. Additionally, over the eight sets, there were 73 tie scores and 31 lead changes, including an astounding 21 ties and 11 lead changes in set two at Loyola, which Valpo dropped 31-29.

Balanced Offensive Attack: One of the keys to the Crusaders’ success this year has been balance in the offensive attack, and that was showcased again last weekend. Over the two matches, three Crusaders posted double-digit kill totals, with Sarah Dooms doing it at UIC, while Morgan Beil and Ellen Vanden Berg each reached double figures at Loyola. On the season, six different players have paced the Crusaders at least once in kills, with Beil doing it a team-high five times. Valpo also boasts four players averaging between 2.03 and 2.39 kills/set.

Tournament Title: Valpo captured the Hoosier Classic crown two weekends ago after defeating host Indiana, Miami (Ohio) and UT-Chattanooga in its final weekend of pre-league tournament play. The championship was the Crusaders’ first in an in-season tournament since capturing the Bradley Invitational in 2010, the last of three straight titles. It marks the 15th in-season tournament title for Valparaiso in Coach Avery’s 11th season at the helm.