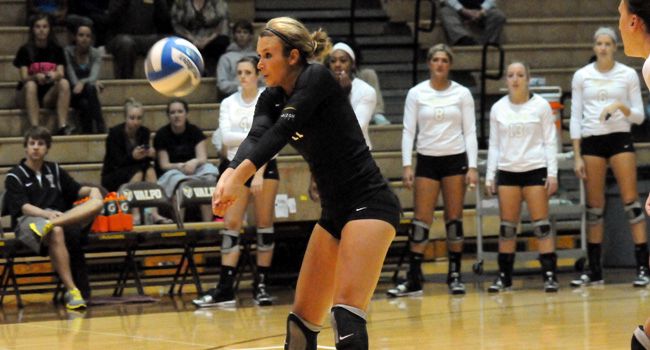 Root needed five digs to tie and six to surpass the previous mark of 2,309 set by Valpo's last libero, Brittany Malicoat, and broke the record midway through the first set at 14-12. The senior led all players on Wednesday with 27 digs to close the evening with 2,331 digs, moving into 25th place in NCAA history in the category. Root sits just 125 digs outside of the top-10 all-time.

"A big congratulations to Taylor Root tonight," said Crusader head coach Carin Avery. "She has been a reliable, steady, competitive driving force for our program in the last four years. We've been blessed with great liberos over the last decade, and she has continued that tradition while helping our program maintain its high level of success."

Valpo jumped out to a quick 10-5 lead in the opening set on the strength of three early kills by junior Janelle Hobbs (Hartland, Wis./Arrowhead) and a pair of terminations from redshirt sophomore Kelsey Victor (Logansport, Ind./Logansport) and still led by five points at 14-9. The Jackrabbits scored seven straight points at that point, however, to take the lead for good as they claimed the opening set.

The second set was all Crusaders, however, as Valpo hit nearly .300 for the frame while holding SDSU to just .024 hitting. The Crusaders used an early four-point run to push the lead out to 7-3 and never led by less than three points the rest of the way. The Jackrabbits were within five at 14-9, but Valpo scored five in a row, including two kills by senior Mary Dent (Chicago, Ill./Von Steuben) and a pair of blocks from sophomore Morgan Beil (St. Louis, Mo./Marquette), to cruise to the win and send the match into the in-game break tied at one set apiece.

The script got flipped in the third set, as SDSU scored the first eight points of the set, and Valpo could get no closer than five points the rest of the way. The fourth set saw the Jackrabbits claim the early lead, but Valpo erased a 14-10 deficit with a 5-1 run to tie the frame at 15-all. SDSU responded wtih four straight, however, as it claimed the match in four sets.

No Crusader reached double digits in kills on Wednesday night, as Dent led the way with nine kills on .304 hitting. Beil, Victor and junior Sarah Dooms (Greenwood, Ind./Center Grove) each chipped in eight kills as well. Freshman Kelsey Berrington (Britton, Mich./Tecumseh) handed out 19 assists to go along with 18 from junior Ariel Cudney (LaPorte, Ind./LaPorte). Root paced four Valpo players in double figures in digs, as Dooms finished one off her career high with 23 digs.

South Dakota State (11-4) got a match-high 12 kills on .333 hitting and eight blocks from Kelli Fiegen, while Kelly Herrmann posted 11 kills and Kaitlin Klingemann 10 terminations. The Jackrabbits out-killed Valpo 56-50 and out-blocked the Crusaders by a 13-6 margin.

Valparaiso (9-8) kicks off a stretch of seven consecutive Horizon League matches on Friday evening as the Crusaders play at Wright State. First serve is set for 6 p.m. CDT, and live video and live stats will be available through www.valpoathletics.com.