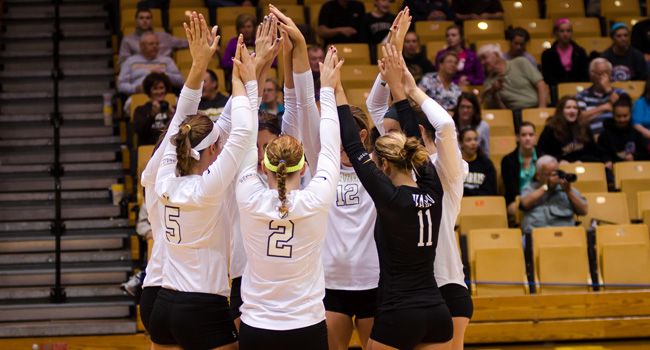 This Week in Crusader Volleyball: Valparaiso hosts Horizon League matches for the first time in 2012 as the Crusaders return to the ARC for Homecoming weekend. Valpo takes on Cleveland State Friday night before hosting Youngstown State on Saturday evening.

Previously: The Crusaders dropped a home non-league contest to South Dakota State last Wednesday, 3-1. Valpo then went on the road and rallied from a two-set deficit to earn a 3-2 Horizon League victory over Wright State.

Next Up: Valpo returns to the road next weekend, making its annual swing through the state of Wisconsin. The road trip begins at Green Bay Friday night before stopping to take on Milwaukee Saturday afternoon.

Following the Crusaders: Live video for both of this week’s matches will be available through the Horizon League Network, as well as live audio of the Youngstown State match on WVUR (95.1 FM, Valparaiso). Links to the audio and video webcasts, as well as live stats, can be found at www.valpoathletics.com.

Head Coach Carin Avery: Over her 10-plus years as head coach, Carin Avery has won 251 matches and has led Valpo to three league regular season and tournament titles, as well as three NCAA Tournament appearances. A two-time league Coach of the Year, Avery has coached 42 All-League recipients over her tenure as Crusader head coach. She is Valpo’s all-time leader in both victories and winning percentage, and now owns 306 career victories overall.

Series Notes: Valpo leads the all-time series with Cleveland State, 15-11, but the Vikings have won five of the last six meetings over the past three seasons. Last season, CSU earned wins both in Valpo (3-2) and in Cleveland (3-1). The Crusaders also boast an 18-6 advantage in the all-time series with Youngstown State and have won eight straight matchups over the last four years. Valpo swept both meetings, 3-0, with the Penguins in 2011.

Scouting the Opposition: Cleveland State enters Friday night with an 11-6 overall record in 2012 and is tied atop the Horizon League standings with a 3-1 mark in league action. The Vikings are led offensively by Kara Koch, who leads the Horizon League and ranks fourth in the nation with an average of 4.95 kills/set. Youngstown State enters the weekend 11-7 overall and 1-3 in Horizon League play prior to its Friday night contest at Wright State. The Penguins get a team-best 3.30 kills/set from Missy Hundelt, while Jenna Cavanaugh hits at a .293 clip and also leads YSU with 1.23 blocks/set.

Root Sets the Mark: Senior Taylor Root broke Valpo’s career digs record with her sixth dig in the match against SDSU, surpassing Brittany Malicoat’s previous mark of 2,309 digs. Root, who already held the Horizon League career record, ended the weekend with 2,362 career digs, now sits 23rd in NCAA history in the category and is less than 100 digs shy of the top-10.

Earning League Awards: Root was named the Horizon League Defensive Player of the Week for a league-record ninth time on Monday, following her record-breaking performance last weekend. The senior tallied 58 digs over the Crusaders’ two matches, averaging 6.44 digs/set. Root was the second Crusader to earn weekly honors from the league office this year, joining junior Ellen Vanden Berg, who was named Defensive Player of the Week on Sept. 17.

Balanced Offensive Attack: One of the keys to the Crusaders’ success this year has been balance in the offensive attack, and that was showcased again last week. Four different players picked up either eight or nine kills against SDSU, while Ellen Vanden Berg, who only had five kills against the Jackrabbits, paced Valpo at Wright State with a career-high 16 kills. On the season, six different players have paced the Crusaders at least once in kills, with Morgan Beil doing it a team-high five times. Valpo also boasts four players averaging between 1.97 and 2.35 kills/set.

Block Party: The Crusaders posted a season-high 15 blocks in the come-from-behind win at Wright State, matching the second-highest output by a Horizon League team this year. Leading the way was redshirt sophomore Kelsey Victor, who set a new career best with 10 rejections. The 10 blocks was the most by a single Crusader since the move to 25-point sets prior to the start of the 2007 season.

Tournament Title: Valpo captured the Hoosier Classic crown in mid-September after defeating host Indiana, Miami (Ohio) and UT-Chattanooga in its final weekend of pre-league tournament play. The championship was the Crusaders’ first in an in-season tournament since capturing the Bradley Invitational in 2010, the last of three straight titles. It marks the 15th in-season tournament title for Valparaiso in Coach Avery’s 11th season at the helm.