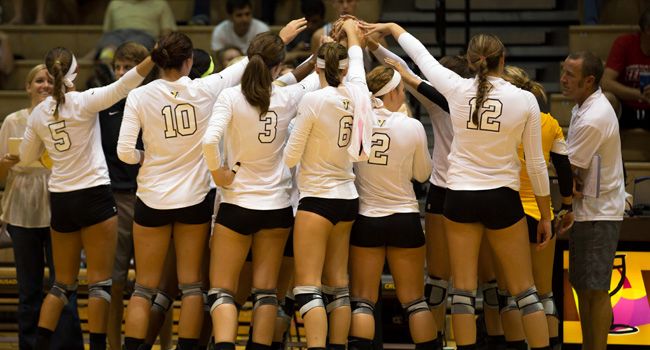 This Week in Crusader Volleyball: Valparaiso makes its annual swing through the state of Wisconsin in Horizon League play this weekend, as the Crusaders take on Green Bay Friday night and Milwaukee Saturday afternoon.

Previously: Valparaiso split a pair of Horizon League matches last weekend at the ARC. The Crusaders dropped the first two sets to Cleveland State before rallying to force a fifth set, but eventually lost, 3-2. Valpo then bounced back with a 3-1 win over Youngstown State Saturday evening.

Next Up: The Crusaders return home for a four-match homestand starting next weekend with matches against Loyola and UIC. Valpo will then host IUPUI in mid-week action on Tuesday, Oct. 23 before closing the homestand against Wright State on Friday, Oct. 26.

Following the Crusaders: Live video for the Milwaukee match will be available through the Horizon League Network. A link to the video, as well as to live stats for both matches, can be found at www.valpoathletics.com.

Head Coach Carin Avery: Over her 10-plus years as head coach, Carin Avery has won 252 matches and has led Valpo to three league regular season and tournament titles, as well as three NCAA Tournament appearances. A two-time league Coach of the Year, Avery has coached 42 All-League recipients over her tenure as Crusader head coach. She is Valpo’s all-time leader in both victories and winning percentage, and now owns 307 career victories overall.

Series Notes: Valpo leads the all-time series with Green Bay, 18-9, but the Phoenix won both meetings last season: 3-0 in Green Bay and 3-2 in Valparaiso. Prior to that, the Crusaders had won seven straight matchups between the two squads. The Crusaders trail the all-time series with Milwaukee, 18-13, and have won just one of the last eight matches against the Panthers.

Scouting the Opposition: Green Bay enters the weekend at 10-9 overall, most recently sweeping Chicago State in mid-week action, but just 1-4 in Horizon League play. Carmen Leitermann paces the Phoenix offense, hitting .320 with 2.80 kills/set, while Brittany Groth leads the Horizon League with 6.09 digs/set. Milwaukee enters the weekend with a 7-11 record, including a 2-3 mark in league action. Julie Kolinske paces a trio of Panther attackers with 3.99 kills/set, while Rachel Neuberger hits .321 and averages 3.03 kills/set.

Alternating Results: Over its last seven matches, Valpo has alternated wins and losses, dating back to a Sept. 15 win over UT-Chattanooga. This is the second long stretch of alternating results for the 11-9 Crusaders this year, who have lost back-to-back matches just once and have won consecutive matches just twice, including a season-long three-match winning streak at the Hoosier Classic.

Root Sets Another Record: There aren’t many Valpo records that senior Taylor Root doesn’t already hold when it comes to digs, but she found another one to set last week against Cleveland State. Root tallied a career-high 39 digs against the Vikings, a new Crusader record for a five-set match and tying the second-most in any length match in program history. The senior, who broke Valpo’s career digs record the previous week, also tallied 25 digs against YSU and now has 2,426 career digs, 14th in NCAA history and just 30 away from the top-10.

Big Offense From the Middles: Valpo’s middle duo of Morgan Beil and Ellen Vanden Berg both had great weekends offensively in last week’s pair of matches. The duo both hit above .350 and combined for 31 kills against Cleveland State, with Beil matching her career high with 18 terminations. Then, against Youngstown State, both players hit at least .385 and totaled 33 kills, with a Valpo season-best and a career-high 19 of those coming from Vanden Berg on .441 hitting. Both players are hitting .279 on the season and rank 1-2 on the team in kills/set.

Earning League Awards: Root was named the Horizon League Defensive Player of the Week for a league-record ninth time on Oct. 1, following her record-breaking performance the previous weekend. The senior tallied 58 digs over the Crusaders’ two matches, averaging 6.44 digs/set. Root was the second Crusader to earn weekly honors from the league office this year, joining junior Ellen Vanden Berg, who was named Defensive Player of the Week on Sept. 17.

Tournament Title: Valpo captured the Hoosier Classic crown in mid-September after defeating host Indiana, Miami (Ohio) and UT-Chattanooga in its final weekend of pre-league tournament play. The championship was the Crusaders’ first in an in-season tournament since capturing the Bradley Invitational in 2010, the last of three straight titles. It marks the 15th in-season tournament title for Valparaiso in Coach Avery’s 11th season at the helm.