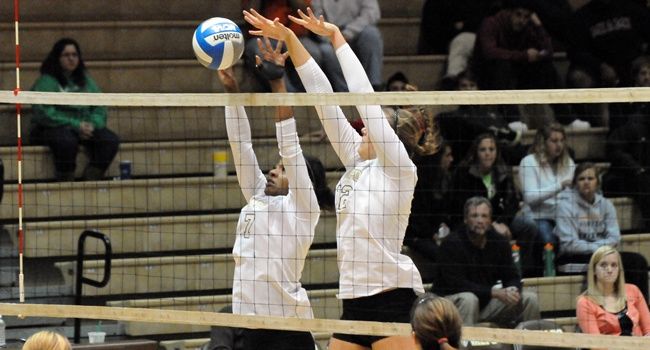 "This was a very good win for us tonight, because it keeps us in the hunt near the top of the league standings," said Crusader head coach Carin Avery.  "It was a very important match after last night's loss, and I thought we did a really good job of coming back today ready to play.  We did a much better job tonight offensively, and defensively it was one of our best blocking nights of the year."

For the second straight night, the Crusaders had a stellar blocking performance at the net.  Saturday night saw Valpo tally 15 total team blocks, following a 20-block performance on Friday evening.  Junior Ellen Vanden Berg (Little Chute, Wis./Little Chute) led the way again with 11 blocks, matching her Friday total.  Vanden Berg's 11 blocks are tied for fifth-most in a four-set match all-time at Valpo, while she has posted two of the top-15 blocking matches in program history over the last two nights.  She is also the only player to reach the mark since the move to 25-point rally scoring.

Vanden Berg wasn't the only player to set or break a career record in the category Saturday, as junior Janelle Hobbs (Hartland, Wis./Arrowhead) was in on six of the Crusaders' blocks to set a new career high.  Redshirt sophomore Kelsey Victor (Logansport, Ind./Logansport) tallied five blocks, while senior Mary Dent (Chicago, Ill./Von Steuben) matched her career best with four rejections.

The Crusaders utilized a strong offensive performance, hitting .387 with 13 kills and just one attack error, and an 84% sideout percentage to take the opening set Saturday.  The first half of the frame was back-and-forth, as a UIC kill tied the set at 14-all.  But Valpo pulled away with an 11-4 spurt, not allowing the Flames to string together two straight points, and eventually ended the set on a block by Hobbs and Vanden Berg.

In the second set, a pair of Vanden Berg kills sandwiched around a block by Vanden Berg and Dent pushed Valpo's lead late to 19-15.  But the Flames responded with five of the next six points to tie the set at 20 apiece.  The Crusaders answered with three straight points, including a kill from Hobbs and a block by Dent and Victor, to go ahead 23-20, but again UIC rallied with three consecutive points to make it 23-all.  A kill by Dent gave Valpo set point at 24-23, and a pipe attack out of the back row by redshirt sophomore Lindsey Hauch (Coloma, Mich./Coloma) landed for a kill to end the set in the Crusaders' favor, giving them a 2-0 lead into the in-game break.

A four-point spurt midway through the third set broke an 11-11 tie as UIC pulled ahead 15-11.  The two sides traded sideouts on the next six points before the Flames strung together five straight to lead 22-14, a lead it would not relinquish to send the match into the fourth set.

Valpo had the early momentum in the fourth frame, as the set started with back-to-back service aces by freshman Kelsey Berrington (Britton, Mich./Tecumseh) to force a quick UIC timeout.  The Crusaders continued to push the advantage, totaling eight kills early on as they led 12-4.  Despite a three-point spurt mid-set by the Flames, Valpo maintained its lead, with a Vanden Berg kill making it 19-13 Crusaders.

UIC rallied with three straight points to cut the lead to 19-16, and following a Dent kill, three consecutive Crusader hitting errors sliced the advantage to 20-19.  But unlike Friday's fourth set, Valpo would not surrender the lead.  Sophomore Morgan Beil (St. Louis, Mo./Marquette) and junior Sarah Dooms (Greenwood, Ind./Center Grove) registered back-to-back kills, and following a UIC kill, Beil and Victor picked up terminations to give Valpo match point at 24-20.  The Flames held off two match points on kills by Kelsey Safranek, but on the third chance, fittingly it was Vanden Berg teaming up with Victor on a block to end the match.

Vanden Berg also paced the Crusaders offensively in picking up her first career double-double, posting 13 kills on .344 hitting.  Beil and Hobbs each tallied nine kills, while Dent added eight in the balanced Crusader attack.  Berrington and junior Ariel Cudney (LaPorte, Ind./LaPorte) each handed out 24 assists, while the former racked up three aces.  Senior Taylor Root (Jenison, Mich./Jenison) led the effort in the back row with 25 digs to go along with 19 digs by Dooms.

Valparaiso (14-10, 6-3 Horizon) steps out of league play on Tuesday evening to host IUPUI at the ARC at 7 p.m.  The match can be seen live on the Horizon League Network and heard live on WVUR, 95.1 FM, Valparaiso.  Links for the live video and audio, as well as live stats, will be available through www.valpoathletics.com.