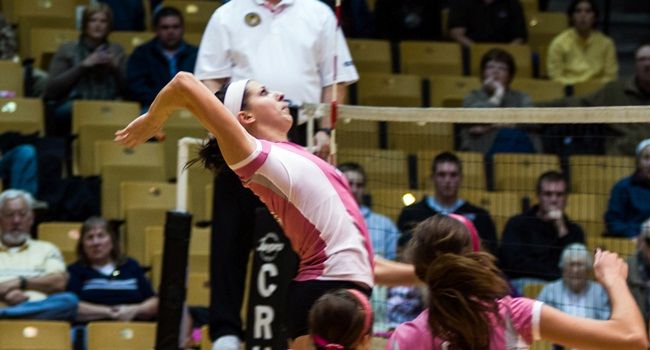 The opening set was never in doubt, as the Crusaders used an early 7-1 run to push their advantage to 13-5 at the halfway point. Four different Valpo players had kills during the run, while junior Ariel Cudney (LaPorte, Ind./LaPorte) added a service ace in addition to her kill. After Wright State cut the lead to 14-10, another 7-1 spurt gave Valpo a double-digit lead, and while the Raiders rallied late to within 24-20, a kill by junior Ellen Vanden Berg (Little Chute, Wis./Little Chute) gave the opener to the Crusaders.

The second set was much tighter in the waning stages, as a three-point run by the Raiders cut Valpo's edge to 19-18. The Crusaders responded with four of the next six points, including a pair of kills from redshirt sophomore Kelsey Victor (Logansport, Ind./Logansport), to go ahead 23-20, but Wright State scored the next two to move to within one point. A kill by junior Sarah Dooms (Greenwood, Ind./Center Grove) gave Valpo set point, and while the Raiders held off one Crusader chance, a termination from junior Janelle Hobbs (Hartland, Wis./Arrowhead) put Valpo ahead 2-0 into the in-game break.

An early 6-2 Crusader lead quickly turned into a deficit in the third set, as Wright State scored seven of the next nine to lead 9-8. The Raiders still led 11-10 before a huge 12-3 run by Valpo put it in complete control. The run showcased the balanced Crusader offense, as all six Valpo primary attackers had a kill during the run, which put Valpo ahead by eight points. Eventually, a kill from senior Mary Dent (Chicago, Ill./Von Steuben) closed out the Crusader sweep.

Victor led the balanced Valpo offense with 11 kills on .556 hitting, while Dooms and Vanden Berg added eight kills apiece. Dent, Hobbs and sophomore Morgan Beil (St. Louis, Mo./Marquette) each chipped in seven kills as well as the Crusaders hit .271 as a team, posting 50 kills against just 14 attack errors. Freshman Kelsey Berrington (Britton, Mich./Tecumseh) handed out 24 assists to go along with 18 from Cudney.

“It was nice to see us have such a high hitting percentage in a league match, because that's something we've struggled with this year,” said Crusader head coach Carin Avery. “Tonight, it had a lot to do with our passing being so good, and then our setters are really maturing in their decision-making process in choosing where to set.”

Senior Taylor Root (Jenison, Mich./Jenison) registered a tremendous 31 digs in just three sets, trailing only her own mark of 34 for most digs in a three-set match in the nation this season. Dooms added 17 digs and redshirt sophomore Lindsey Hauch (Coloma, Mich./Coloma) posted 10 digs as Valpo out-dug Wright State 79-61.

“As a senior and as a two-time honorable mention All-American, we expect great things from Taylor every match because she's such a great player,” said Avery. “But tonight, Taylor really took it to another level. She was absolutely unbelievable.”

Wright State (2-25, 0-10 Horizon) was led by 12 kills on .391 hitting from Marisa Aiello, while Heidi Splinter added 10 kills and a team-best 16 digs. Ashleigh Lucco also registered a double-double in the losing effort for the Raiders with 30 assists and 11 digs.

Valparaiso (16-10, 7-3 Horizon) steps out of league play to start a three-match road trip on Tuesday evening as the Crusaders play at Chicago State at 7 p.m. Live stats will be available through www.valpoathletics.com.