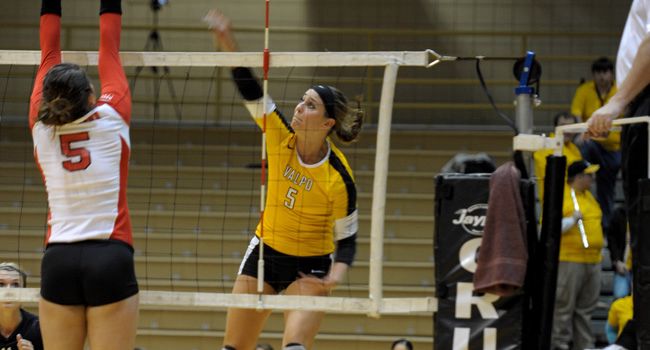 Valparaiso senior outside hitter Sarah Dooms (Greenwood, Ind./Center Grove) has been named the Horizon League Offensive Player of the Week after earning Tournament MVP honors at the UCF Invitational over the season's opening weekend.

Dooms kicked off the season by matching her career high with 18 kills while hitting at a .385 clip in the Crusaders' five-set victory over the host Knights. The senior also narrowly missed a double-double, tallying nine kills, and added three blocks and a pair of service aces as well. Dooms stepped up in the decisive fifth set, tallying three kills on just five swings without committing an error to help Valpo earn the season-opening win.

After sitting out Valpo's win over Arkansas-Pine Bluff, Dooms returned to the lineup in the sweep of Alabama State and posted seven kills on .353 hitting along with nine digs in two sets of work. The senior closed the weekend with six kills, six assists and 16 digs in Valpo's sweep of North Florida, which clinched the tournament title for the Crusaders.

On the weekend, Dooms averaged 3.10 kills/set on .320 hitting and also recorded 3.40 digs/set. Dooms, who received her first weekly honor from the league office, and the rest of the Crusaders return to the court this weekend at home, hosting the Valpo Popcorn Classic Friday and Saturday, September 6-7.