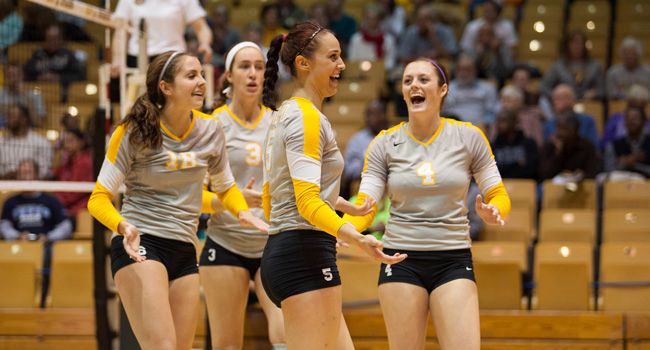 This Week in Crusader Volleyball: A battle for the top of the Horizon League standings awaits Valparaiso on Friday night, as the Crusaders travel to take on current league leader Milwaukee. The Wisconsin road swing concludes Saturday evening when Valpo plays at Green Bay.

Previously: Valpo put together a pair of sweeps in a three-day span last weekend, posting its best hitting percentage in nearly two years in a Horizon League win over UIC, the program’s 20th of the season. The Crusaders then stepped out of league play for the final time with a 3-0 win at Chicago State on Monday.

Head Coach Carin Avery: In her 12th season as head coach at Valpo, Carin Avery has won 283 matches and has led Valpo to three league regular season and tournament titles, as well as three NCAA Tournament appearances. A two-time league Coach of the Year, Avery has coached 37 All-League recipients over her tenure as Crusader head coach. She is Valpo’s all-time leader in both victories and winning percentage, and owns 338 total career victories in her 14th season overall as a head coach.

Series Notes: Milwaukee - The Panthers swept Valpo at the ARC earlier this season (the Crusaders’ last loss) to push their series advantage to 19-15 over the Crusaders. UWM is also 11-6 against Valpo since Avery became head coach. The Crusaders won both meetings against the Panthers in 2012.
Green Bay - Valpo has now won three straight meetings against the Phoenix, following a 3-2 win at the ARC earlier this season. Overall, the Crusaders are 21-9 all-time against Green Bay, including a 12-3 edge under Avery.

Scouting the Opposition: Milwaukee - The Panthers enter this weekend at 13-8 overall and a perfect 9-0 in league play. UWM is at or near the top of the league in all statistical categories, led by Rachel Neuberger’s league-best .366 hitting percentage on 3.05 kills/set. Kayla Price leads the league as well with 10.68 assists/set.
Green Bay - The Phoenix are 10-12 and 5-4 in league play, with a Friday match versus UIC. Green Bay boasts the league’s top-two in kills in Shannon Hurley (3.42 kps) and Leah Van Zeeland (3.20 kps), while Jillian Bauer is averaging a league-best 4.87 digs/set.

Model of Consistency: With its win last Saturday over UIC, Valparaiso ensured it will remain in an elite group of volleyball programs. The Crusaders have won 20 or more matches every year since 2002, Avery’s first at the helm of the program. Valpo is one of just 11 programs nationwide to have won at least 20 matches in each of the last 11 years, a group which also includes Colorado State, Dayton, Florida, Hawai’i, Nebraska, Ohio, Penn State, Stanford, UNI and Western Kentucky. Valpo was the first program to reach the mark this year, while Florida and Western Kentucky both have already picked up 20 wins as well.

21-4: As one might expect with a pair of eight-match winning streaks within the same season, Valpo has not often had this high a winning percentage this late in the season. In fact, only the 2004 team, which was also 21-4 through 25 matches, has even matched the record through 25 matches that this year’s team has posted.

A Look at the Recent Streak (Offense): During the current eight-match winning streak, the Crusaders’ offense hasn’t fluctuated much from the first 17 matches of the season. In fact, Valpo is hitting at the exact same percentage and averaging just 0.06 more kills/set in the last eight matches. Where the offense has come from has shifted, though. Senior Sarah Dooms, who surpassed the 1,000-kill milestone for her career two weeks ago, has stepped up to hit .239 with 3.37 kills/set in the streak after hitting just .156 with 2.49 kills/set prior. Junior Morgan Beil is also hitting 38 points better.

A Look at the Recent Streak (Defense): Meanwhile, the Crusader defense has stepped up in both rows. The back line is averaging 1.30 digs/set more over the course of the winning streak, led by 4.53 digs/set from freshman libero Morganne Longoria. Then, at the net, Valpo is tallying 2.67 blocks/set in the streak, as compared to 2.41 blocks/set prior to the start. Senior Ellen Vanden Berg has been huge on the block in recent weeks, contributing on 1.67 blocks/set. Over the last seven matches, the Crusaders have totaled at least nine blocks in every contest.

Record Book Watch: A number of Crusaders are making their marks on Valpo’s career record book as the 2013 season hits the home stretch. Sarah Dooms already ranks among the all-time top-10 in attacks (3,554 - 3rd) and digs (1,542 - 4th and Valpo’s all-time best non-libero) and moved into 10th in kills on Monday with 1,051 career kills. Ellen Vanden Berg has tallied 380 blocks, sixth-most in program history and just eight rejections shy of fifth, while her career hitting pct. of .252 would tie for seventh all-time. Morgan Beil would rank second in Crusader history with her .275 hitting percentage as well. Meanwhile, Ariel Cudney has totaled 132 career service aces, fourth-most all-time, while Kelsey Berrington ranks 10th with 1,328 career assists.