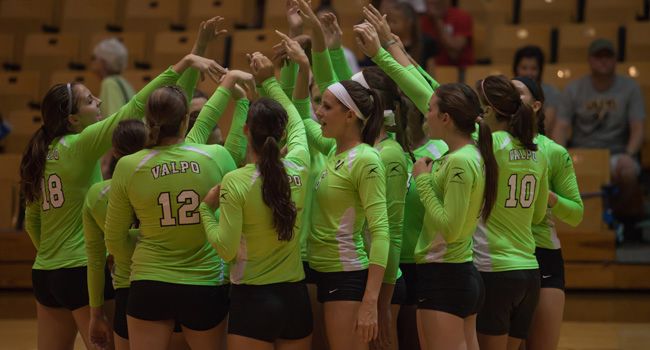 This Week in Crusader Volleyball: In search of a 13th straight 20-win season, Valparaiso opens the 2014 campaign this weekend at the NCCU Invitational in Durham, N.C., taking on Campbell and Wofford in addition to the host Eagles. Valpo returns five starters from last season's 25-win team, which finished second in the Horizon League.

Following the Crusaders: Live audio for the NCCU match will be available through ValpoAthletics.com. The Horizon League Network will carry free live video of each of the Crusaders' league matches and all home non-league matches, while select matches will be covered by Valpo's student radio station, WVUR [95.1, Valparaiso], as well. In addition, most matches will have live stats available online.

Head Coach Carin Avery: Over her first 12 seasons as head coach at Valparaiso, Carin Avery has won 287 matches and has led Valpo to three league regular season and tournament titles, as well as three NCAA Tournament appearances. A two-time league Coach of the Year, Avery has coached 40 All-League recipients over her tenure as Crusader head coach. She is Valpo’s all-time leader in both victories and winning percentage, and owns 342 career victories overall as a head coach.

Series Notes: Valpo has never faced any of its three opponents this weekend prior to this season.

Scouting the Opposition: All four teams this weekend are opening the 2014 season. Wofford is coming off a 13-19 season, including a 7-9 mark in SoCon play. Campbell went 14-17 in 2013, including a 10-7 mark outside of league play, but went just 4-10 within the Big South. NCCU earned three wins last season as well.

Visiting the Tar Heel State: While the Crusaders have not played any of this weekend's opponents previously, they do have history in the state of North Carolina. Valpo played in-season tournaments in North Carolina in both 2006 (at Western Carolina) and 2010 (at Appalachian State), winning both tournament titles. Fifth-year seniors Lindsey Hauch and Kelsey Victor were both members of the Crusader team that captured the latter tournament.

Preseason All-League Honoree: Senior Morgan Beil was honored Thursday as one of seven members of the Horizon League’s preseason All-League team, and if that’s a harbinger of things to come, Beil will join a select group. The St. Louis native has earned postseason All-League accolades in each of her first three seasons, and if she were to do the same again this year, would join former Crusader Taylor Root as the only Horizon League players to be four-time All-League honorees since the league moved to a single, 12-player team in 2004. Beil ranked fourth in the league and led the Crusaders in hitting percentage last season, posting the fourth-best single-season mark in program history. She is on pace to challenge for the Crusaders' career hitting percentage record and end up among the program's all-time top-10 in kills.