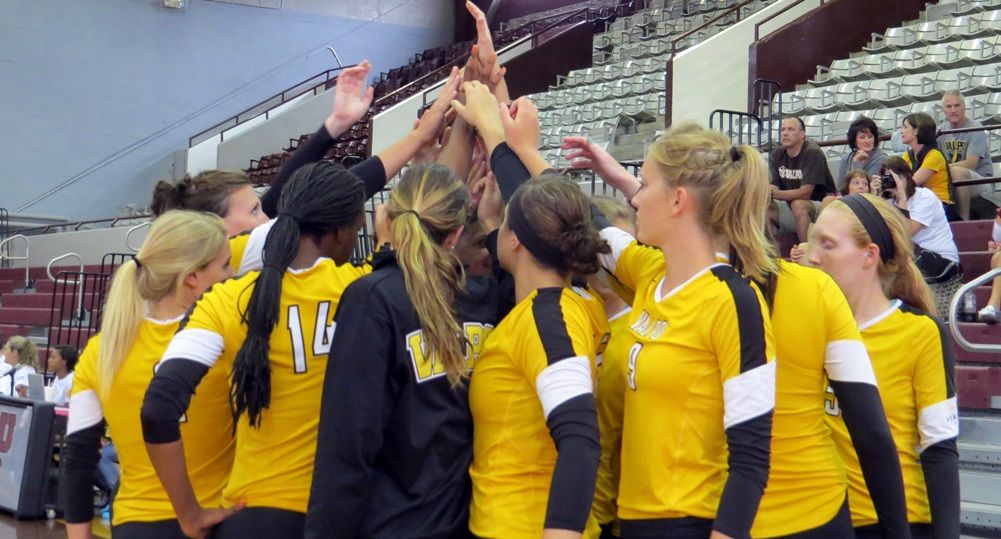 This Week in Crusader Volleyball: Valparaiso continues early-season action this week with four matches.  The Crusaders make their home debut on Wednesday evening as they host in-state rival IUPUI at the ARC before trekking up to Brookings, S.D. for the Jackrabbit Invitational, where they will face UMKC and Stephen F. Austin as well as host South Dakota State.

Previously: The Crusaders went 2-1 last weekend in the opening weekend of play in the 2014 season at the NCCU Invitational.  Valpo earned four-set wins over Wofford and North Carolina Central, but fell in five sets to Campbell in its second match of the tournament.  Emily Campbell and Kelsey Berrington represented the Crusaders on the All-Tournament Team.

Following the Crusaders: Live video, audio and stats for Wednesday’s match against IUPUI, as well as live stats for all three of this weekend’s matches, will be available through ValpoAthletics.com. The Horizon League Network will carry free live video of each of the Crusaders' league matches and all home non-league matches, while select matches will be covered by Valpo's student radio station, WVUR [95.1, Valparaiso], as well. In addition, most matches will have live stats available online.

Head Coach Carin Avery: In her 13th season as head coach at Valparaiso, Carin Avery has won 289 matches and has led Valpo to three league regular season and tournament titles, as well as three NCAA Tournament appearances. A two-time league Coach of the Year, Avery has coached 40 All-League recipients over her tenure as Crusader head coach. She is Valpo’s all-time leader in both victories and winning percentage, and owns 344 career victories overall as a head coach.

Series Notes: IUPUI – Valpo owns a 21-13 edge in the all-time series against the Jaguars, including a five-set victory in Indianapolis last season on Oct. 15.  The Crusaders own seven straight home wins over IUPUI dating back to 2004.

UMKC – A former conference opponent, the Crusaders are 21-8 all-time versus the ‘Roos.  The two squads have not met since Valpo left the Mid-Con after the 2006 campaign, and the Crusaders currently hold a 10-match winning streak in the series.

South Dakota State – The Crusaders are just 1-2 all-time versus the Jackrabbits, but the victory came in the last meeting on Aug. 25, 2012 – a five-set win at the Hawkeye Challenge in Iowa City.

Scouting the Opposition: IUPUI – The Jaguars opened the season 1-2, sweeping Toledo and falling to BYU and West Virginia at the Gold and Blue Player’s Challenge.  IUPUI went 19-14 last season and represented the Summit League in the NCAA Tournament.

UMKC – The ‘Roos went 2-1 on the opening weekend, falling in a five-set match to Drake before beating Central Michigan and host Omaha.  UMKC posted a 15-14 record last year.

South Dakota State – The Jackrabbits enter their home event at 3-1, falling in straight sets to UMBC before rebounding with sweeps of Weber State, UMES and Fairleigh Dickinson last weekend.

Campbell Stepping Up: Sophomore Emily Campbell notched the second All-Tournament honor of her career in the opening weekend at the NCCU Invitational.  Campbell registered a team-high 13 kills on .262 hitting in the win over Wofford, and followed up by matching her career high in the category against Campbell, tallying a match-best 20 kills on .269 hitting.  For the weekend, Campbell averaged 3.67 kills/set and also added 1.44 digs/set.

Berrington Sets the Pace: Junior Kelsey Berrington joined Campbell on the All-Tournament Team last weekend, earning the second All-Tournament accolade of her career as well.  Berrington spent most of the weekend setting all the way around the rotation for the first time at Valpo, averaging 7.92 assists/set.  The junior posted a new career best with 46 assists in the match against Campbell, and registered a pair of double-doubles as well [Campbell – 46 assists/14 digs; Wofford – 35 assists/11 digs].

Preseason All-League Honoree: Senior Morgan Beil was honored as one of seven members of the Horizon League’s preseason All-League team, and if that’s a harbinger of things to come, Beil will join a select group. The St. Louis native has earned postseason All-League accolades in each of her first three seasons, and if she were to do the same again this year, would join former Crusader Taylor Root as the only Horizon League players to be four-time All-League honorees since the league moved to a single, 12-player team in 2004. Beil ranked fourth in the league and led the Crusaders in hitting percentage last season, posting the fourth-best single-season mark in program history. She is on pace to challenge for the Crusaders' career hitting percentage record and end up among the program's all-time top-10 in kills.