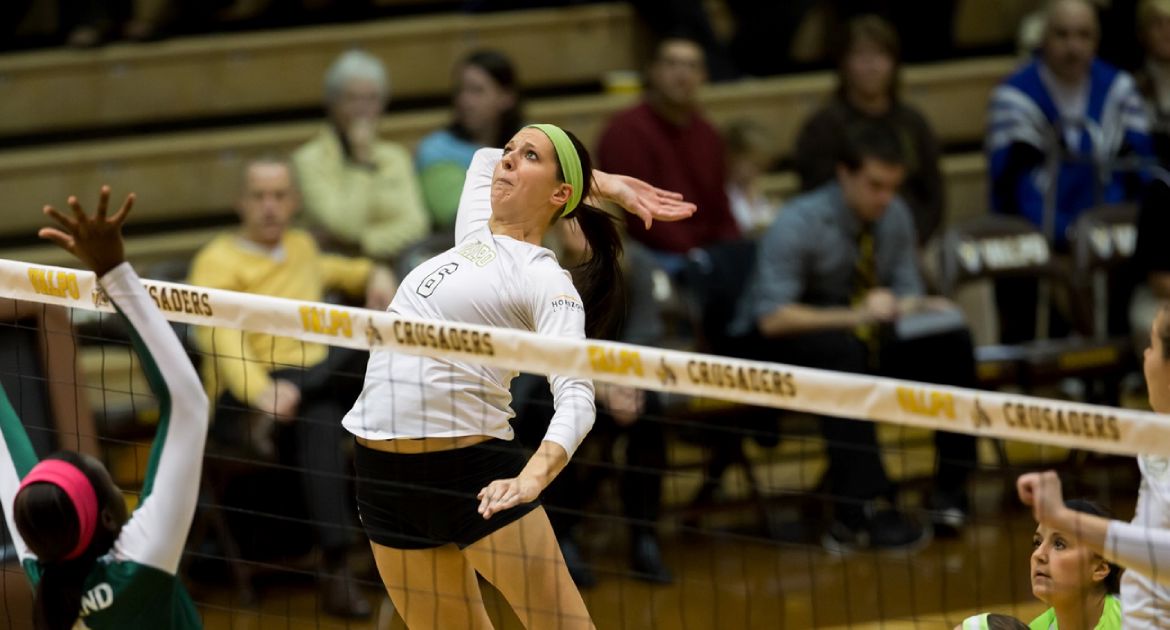 This Week in Crusader Volleyball: Riding a five-match winning streak and a tournament title last weekend at the Jackrabbit Invitational, the Valparaiso volleyball team continues early-season play this weekend at UT-Martin’s Skyhawk Invitational, where it will also take on Western Carolina and Drake.

Previously: Valpo claimed the title at the Jackrabbit Invitational, going a perfect 3-0 to earn the championship.  The Crusaders defeated both UMKC and Stephen F. Austin in four sets before capping the tournament with a sweep of host South Dakota State.  Junior Kelsey Berrington was named Tournament MVP and was joined on the All-Tournament Team by freshman Allison Ketcham and senior Morgan Beil.

Head Coach Carin Avery: In her 13th season as head coach at Valparaiso, Carin Avery has won 292 matches and has led Valpo to three league regular season and tournament titles, as well as three NCAA Tournament appearances. A two-time league Coach of the Year, Avery has coached 40 All-League recipients over her tenure as Crusader head coach. She is Valpo’s all-time leader in both victories and winning percentage, and owns 347 career victories overall as a head coach.

Series Notes: This will be the Crusaders’ second matchup against Western Carolina, as Valpo won the only previous meeting, 3-0, in Cullowhee, N.C. in September of 2006.  The Crusaders are 3-2 all-time against Drake, but dropped the most recent meeting in straight sets at Drake in September of 2009.  Valpo fell in three sets in its only prior matchup against UT-Martin in Springfield, Mo. back in 1999.

Scouting the Opposition: Western Carolina – The Catamounts enter the weekend at 3-3, but have won three straight matches after dropping their opening three of the season.  Jordan Timmermann paces the offense with 3.70 kills/set, while Nicole Ford is registering an impressive 1.40 blocks/set.

Drake – The Bulldogs have done Valpo one better so far this year, as they own a 7-1 record entering the weekend.  Drake already boasts a pair of tournament titles, capturing the Omaha Classic and the Akron Invitational.  Kyla Inderski is averaging 3.21 kills/set to lead the Bulldogs, and in the back row, Michelle Thommi has tallied 4.58 digs/set.

UT-Martin – The Skyhawks have followed the opposite path of the Catamounts so far this year, as they won their first four matches – capturing the ISTAP Collegiate Cup – before dropping their last three entering weekend play.  The UT-Martin offense is hitting at a .236 clip so far this year and has been a balanced attack, with three different players already tallying at least 50 kills.

Another Tournament Title: With the victory last weekend at the Jackrabbit Invitational, the Crusaders continued a tradition of picking up hardware early in the season.  The in-season tournament title was Valpo’s 18th such triumph in the 13-year tenure of head coach Carin Avery.  The Crusaders have now brought home at least one in-season championship in 10 of the last 13 years as well.

Strong on the Attack: The Crusaders have been efficient offensively in the early season, hitting at a .250 clip through the first two weeks of action, good for second in the Horizon League.  Valpo stepped it up to another level last weekend in claiming the tournament championship at SDSU, hitting .286 over its three victories.  Last weekend included a four-set win over Stephen F. Austin in which the Crusaders swung at a .307 clip, the program’s second-best performance in a four-set match since the move to 25-point rally scoring.

Berrington Tabbed MVP: Junior Kelsey Berrington has made the transition to setting all the way around the rotation this season, and has done it well through two weeks, running the Valpo offense at a high level.  Last weekend, she was named tournament MVP of the Jackrabbit Invitational after averaging 11.18 assists/set in leading Valpo to the three victories.  For Berrington, who twice broke her career high for assists last week (55 vs. IUPUI, 56 vs. Stephen F. Austin), it was the third All-Tournament honor of her career and second of the season.