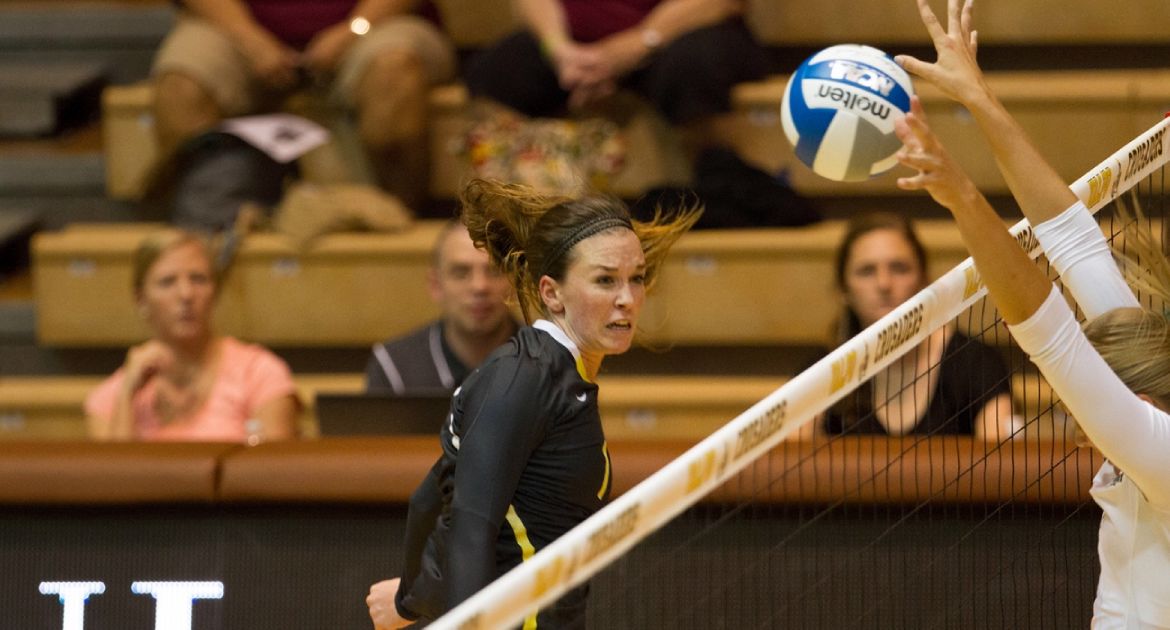 An offense which has clicked on all cylinders all season long stepped it up to another level on Friday evening, as Valparaiso hit at a .378 clip as a team and had three different attackers hit better than .500 in a 3-0 (25-23, 25-19, 25-21) sweep of Western Carolina to kick off play at the Skyhawk Invitational in Martin, Tenn.

“It was a bit of a struggle tonight for us as a team,” said Crusader head coach Carin Avery.  “Even though our offensive numbers were outstanding again, the rest of our game was a bit off.  Our passing game was a little shaky, and we had some things defensively that we were supposed to do that didn't get done.  But in the end, our offensive game is producing right now, and our hitting percentages were again very good, so that is a huge positive for us.”

The Crusaders’ .378 team hitting percentage was their best mark since hitting .394 in a win over UIC on October 26 last season.  Leading the way percentage-wise on Friday was freshman Taylor Graboski (Upper Sandusky, Ohio/Upper Sandusky), who put down eight kills on just 12 swings and committed only one attack error, good for a .583 hitting percentage.  Senior Morgan Beil (St. Louis, Mo./Marquette)  hit .562, posting 10 kills against just one error on 16 swings, while sophomore Jamie Lacheta (Warsaw, Ind./Warsaw) registered a .533 hitting percentage, tallying nine kills and one error on 15 attacks.

While Valpo hit at such a high percentage for the match, committing just five unforced errors on the attack, the Catamounts gave the Crusaders a tussle, as none of the three sets were runaways.  In fact, in the opening set, WCU had a 17-13 lead on the Crusaders before Valpo put together an 8-1 run, including three kills from Lacheta, to take a 21-18 edge.  A three-point run by the Catamounts was countered by three straight Valpo points to earn set point at 24-21, but WCU held off the Crusaders’ first two set point chances.  Finally, a kill from sophomore Emily Campbell (Grand Rapids, Mich./Forest Hills Central) ended the opener in Valpo’s favor.

Valpo led nearly start-to-finish in the second set, but never had it easy, as Western Carolina was within 18-17 before a 7-2 run to end the set gave the Crusaders a 2-0 edge in the match.  It looked like Valpo might run away with the third set, taking an early 5-1 lead, but the Catamounts hung around and eventually used a 6-2 spurt to tie the frame at 20 apiece.  But back-to-back kills from Beil propelled a match-ending 5-1 run, capped by a termination from freshman Allison Ketcham (Mishawaka, Ind./Marian), to give the Crusaders the sweep.

Campbell continued her torrid start to the 2014 campaign, posting a match-best 15 kills on .293 hitting while also registering 11 digs for her fourth double-double of the year.  Junior setter Kelsey Berrington (Britton, Mich./Tecumseh) handed out 44 assists and also contributed 12 digs in the back row for her fifth double-double of the season.  Ketcham tied Berrington for match-high honors with 12 digs, as the Crusaders tallied 56 digs in the three sets, holding Western Carolina (3-4) to just .183 hitting for the match.

Valparaiso (7-1) looks to keep its winning streak alive and takes aim at its second straight tournament crown on Saturday as it faces a pair of opponents.  The Crusaders take on Drake at 10:30 a.m. before closing tournament action against host UT-Martin at 7 p.m.  Both matches will have live stats available through ValpoAthletics.com.