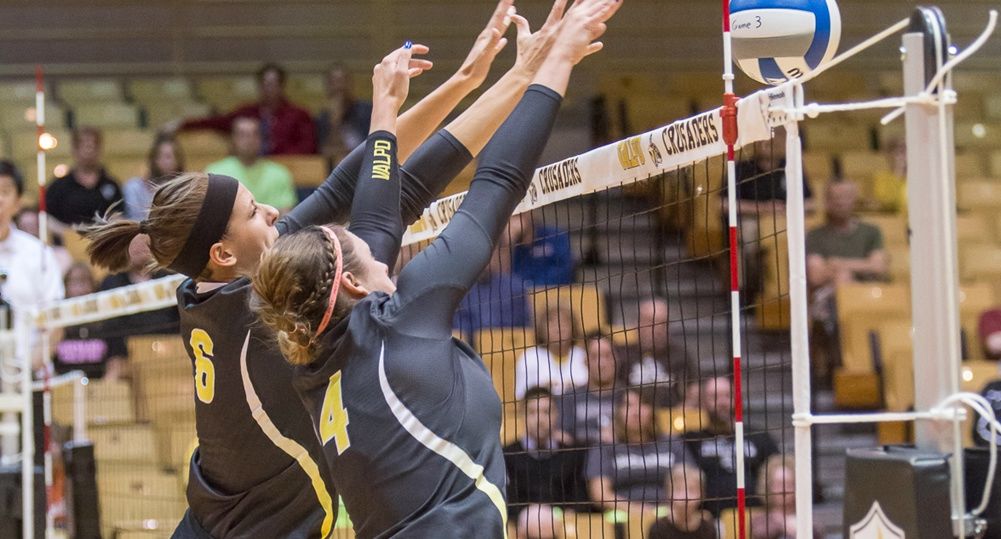 The win was the tenth consecutive victory for the Crusaders, their longest winning streak since capturing 11 straight wins early in the 2010 season.  That season also saw Valpo start out 11-1, as this year’s team has matched the 2010 squad for most wins before picking up a second loss.

“Tonight was just a great, high-level match - both teams were so good and so competitive defensively that it was a fun match to be a part of,” said Crusader head coach Carin Avery.  “Both teams also did a very good job at staying away from unforced errors.”

Valpo did see one streak come to an end on Friday, as the Crusaders would not pick up their sixth consecutive sweep.  Murray State took the lead for good early in the opening set to make sure of that.  But Valpo countered with a strong second set, going on a 9-1 run through the midway point of the frame to extend a three-point lead to 11 points and ensuring the match would go into the in-game break tied at one set apiece.

“The obvious difference for us was that our blocking and defense picked up after the first set,” said Avery.  “Murray State challenged us in a way we weren’t challenged last week, and we needed that.  They have a very athletic attack that came at us from a number of different positions, and we really had to turn up our defense to figure out how to contain them.  In the second set, we did pick it up and we did a great job holding them to .000 hitting.  I thought that was the difference maker of the whole match.”

Another big run for the Crusaders, this one an 8-3 spurt, extended their lead late in the third set to 22-13.  But that run would prove extremely crucial, as just as it looked like Valpo would cruise to a 2-1 lead, the Racers reeled off seven straight points to close within 22-20.  Sophomore Emily Campbell (Grand Rapids, Mich./Forest Hills Central) snapped the Murray State run with a kill, and the teams would trade points the rest of the way.

Similarly in the fourth set, the Crusaders ran out to a big lead, going up 22-11, before a big Racer run, as Murray State scored seven of the next eight points to close within 23-18.  But Campbell registered another termination to earn match point, and fifth-year senior Kelsey Victor (Logansport, Ind./Logansport) slammed the door with a kill to give Valpo its tenth straight victory.

As she has all season long, Campbell led the way offensively for the Crusaders, tallying a match-high 20 kills.  Senior Morgan Beil (St. Louis, Mo./Marquette) continued her steady output as well with 11 kills on .267 hitting.  Junior Kelsey Berrington (Britton, Mich./Tecumseh) handed out 42 assists from her setter position, leaving her just eight helpers shy of 2,000 for her career.

In Friday’s other tournament match, George Washington swept Sacramento State, 3-0.  Saturday sees the Crusaders host four matches at the ARC, with Valpo taking on Sacramento State at 12:30 p.m. and George Washington at 7 p.m.  Both of Valpo’s matches will be carried live on the Horizon League Network, with links for the live video and live stats available through ValpoAthletics.com.