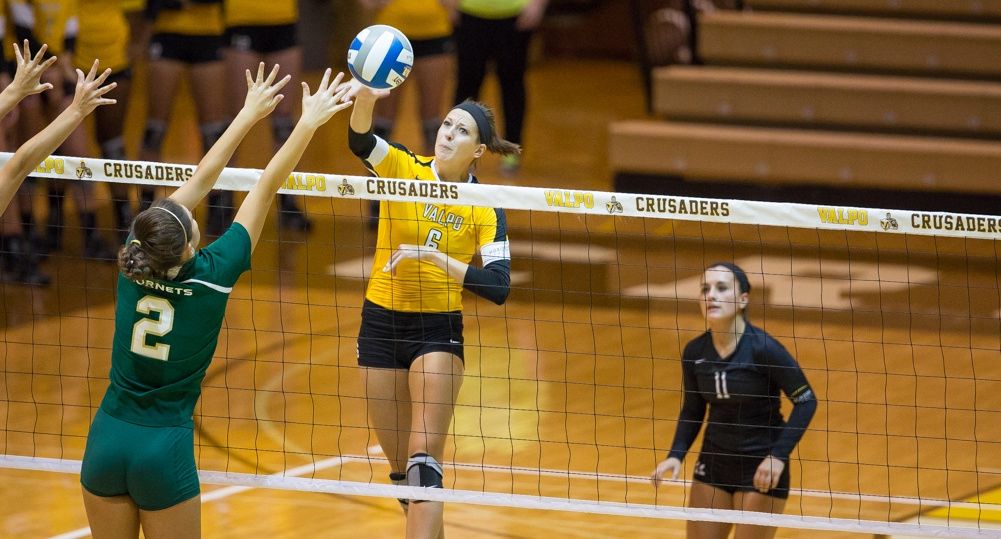 Valparaiso closed out the Crusader Crossroads of America Classic in style Saturday at the ARC, claiming its third straight in-season tournament title with a pair of sweeps, as the Crusaders downed both Sacramento State (25-23, 26-24, 25-15) and George Washington (25-22, 25-17, 25-21) in straight sets.

Valpo now enters Horizon League play with a 13-1 overall record, extending the best start in program history.  The pair of victories also makes it a 12-match winning streak for the Crusaders, the third-longest string of wins all-time at Valpo and the longest win streak since 2008.

“It was really fun tonight to play in a true championship match – this is the first time we’ve had that this year, and I think it was good for us to be in that spot,” said Avery.  “George Washington has some really good athletes, and after the first set I thought we did a pretty good job containing those players.  We figured some things out on them and did a much better job blocking and defending them in the final two sets. I also thought that, even though we didn’t get a lot of aces, we kept them out of system at crucial times and were able to capitalize when we did that.”

The catalyst for the tournament victory was the play on both sides of the ball from tournament MVP Allison Ketcham (Mishawaka, Ind./Marian).  The rookie ranked second on the team over the three tournament wins with 2.90 kills/set on .253 hitting.  But more impressive may have been Ketcham’s defensive play, as she averaged a team-high 5.50 digs/set and registered 51 serve receptions without an error.

The match against George Washington turned out to be a showdown for the tournament title, as both the Crusaders and the Colonials entered the contest at 2-0 on the weekend.  In the opening set, it was Valpo claiming the lead for good with a 4-1 spurt midway through the set to take a 13-10 edge.  The Crusaders kept the Colonials at arm’s length, thanks in large part to .333 hitting for the set.  Valpo earned set point at 24-20 and eventually converted their third chance thanks to a kill from Ketcham.

A 6-1 run in the second set turned an 8-5 Crusader deficit into an 11-9 lead, a lead they would not relinquish.  George Washington was within three approaching the late stages at 19-16, but Valpo ended the frame on a 6-1 run, capped by a block from Ketcham and Victor to send the team into the in-game break up two sets.

Then, the deciding set saw the Crusaders score six straight late to go ahead 21-16, only to see the Colonials score five consecutive points to knot it up at 21-all.  But a scramble play resulted in a lunging third touch from sophomore Morganne Longoria (Burlington, Wis./Burlington), one which clipped the tape and fell on the other side for her first kill of the year to stop the George Washington run.  A big kill from sophomore Emily Campbell (Grand Rapids, Mich./Forest Hills Central), followed by a rejection from Campbell and Victor, gave Valpo championship point, and the Crusaders needed just one chance, as Victor finished out the tournament with an emphatic termination.

Campbell paced the Crusaders against George Washington with 11 kills, while Ketcham hit .500 with 10 kills and added a match-high 18 digs on the back line.  Beil chipped in nine kills on .364 hitting as well.  Junior Kelsey Berrington (Britton, Mich./Tecumseh) handed out 29 assists and tallied 11 digs, and Victor led all players with five blocks.  The Crusaders hit .286 as a team in the victory, committing just four unforced attack errors, while holding George Washington to just .175 hitting.

Valpo advanced to the evening match with a chance for the tournament championship thanks to its sweep of Sacramento State earlier in the day.  The Crusaders rotated in 13 players in the sweep of the Hornets, with only five players seeing action in all three sets.

The first two sets were tight, with a service error on their fourth set point chance giving the Crusaders the opener.  The second set saw Valpo trailing 23-22 late before scoring four of the final five points of the frame, capped by a Campbell kill, to make it 2-0 Crusaders.  Then Valpo left no doubt in the final set, registering six service aces – three of which came off the serve of Berrington – and four blocks while holding Sacramento State to -.121 hitting in the frame.

Ketcham earned her first double-double of her two on the day, tying for match-high honors with 11 kills while also picking up 11 digs.  Berrington handed out 22 assists and also tallied three aces and three blocks, while Longoria paced the defensive effort with 12 digs.  The Crusaders ended the match with eight total rejections in holding the Hornets to .096 hitting, led by four blocks from Beil.

“It was definitely exciting to be at home for a weekend, and we’re excited for the start of league play next weekend,” said Avery.  “Our hope is that all of our tough matches in these early tournaments will have prepared us for the league season.”