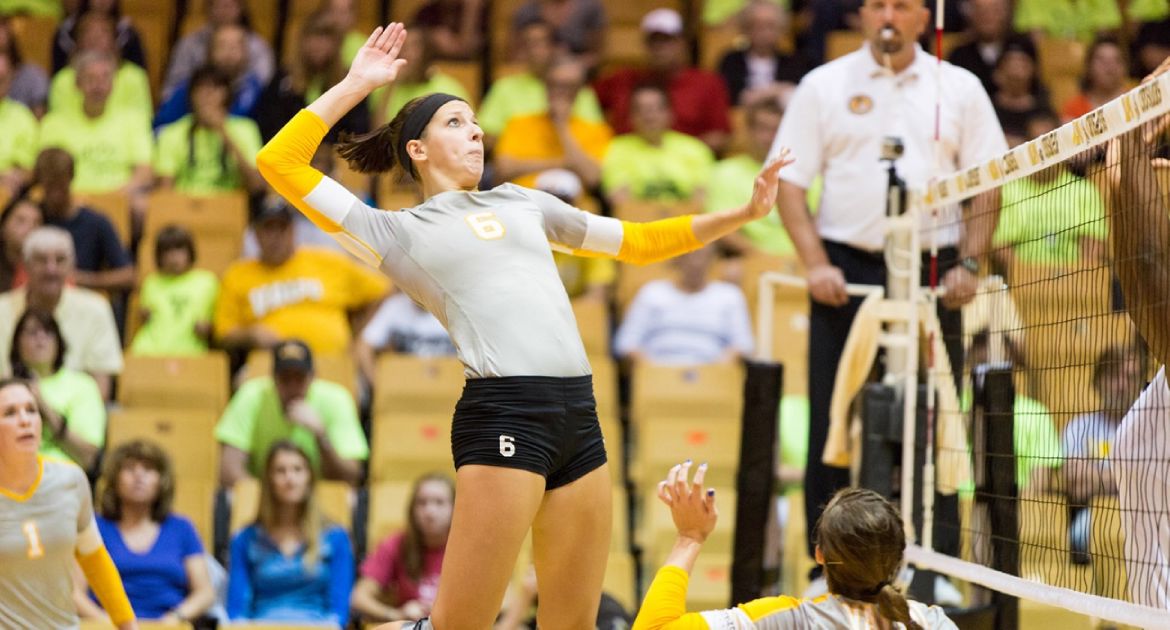 This Week in Crusader Volleyball: The Valparaiso volleyball team comes home to the ARC to continue Horizon League play with a pair of matches this weekend.  The Crusaders will host Youngstown State Friday night before facing Cleveland State Saturday afternoon.

Previously: Valparaiso extended its winning streak to 13 consecutive matches with a sweep last Friday evening at Green Bay in the Horizon League opener, but would not be able to match the program record for longest winning streak, as the Crusaders fell in five sets at preseason favorite Milwaukee on Saturday afternoon.

Following the Crusaders: Live video through the Horizon League Network and live audio on WVUR will be available for both matches this weekend, with links for the live video, audio and stats available at ValpoAthletics.com.  HLN will carry free live video of each of the Crusaders' league matches and all home non-league matches, while select matches will be covered by Valpo's student radio station, WVUR [95.1, Valparaiso], as well. In addition, most matches will have live stats available online.

Head Coach Carin Avery: In her 13th season as head coach at Valparaiso, Carin Avery has won 300 matches and has led Valpo to three league regular season and tournament titles, as well as three NCAA Tournament appearances. A two-time league Coach of the Year, Avery has coached 40 All-League recipients over her tenure as Crusader head coach. She is Valpo’s all-time leader in both victories and winning percentage, and owns 355 career victories overall as a head coach.

Series Notes:  Youngstown State – The Crusaders have dominated the all-time series against the Penguins, carrying a 23-7 advantage into Friday’s matchup.  Valpo is 13-3 versus YSU since joining the Horizon League, but only went 2-1 against the Penguins last year, losing to them for the first time since 2007.

Cleveland State – Valpo is up 17-13 in the all-time series against CSU, but since joining the Horizon League, the Vikings have enjoyed an 11-5 advantage.  The Crusaders turned the tables on CSU last season, however, winning in five sets at Cleveland and in a sweep at the ARC in the two matchups.

Scouting the Opposition: Youngstown State – The Penguins enter the weekend at 10-7 overall and 1-1 in league play after splitting on opening weekend.  Lexi Egler leads YSU with 3.19 kills/set, while Shannon Watson adds 2.52 kills/set on .268 hitting and also registers a team-best 1.18 blocks/set.

Cleveland State – The Vikings are 8-7 overall and 1-1 in Horizon League action, and will play at UIC Friday before coming to the ARC on Saturday.  Maggie Hannon paces the Vikings with 2.73 kills/set on .262 hitting, while Nikki Holmes leads the Horizon League with an average of 5.46 digs/set.

Avery Reaches 300: Head coach Carin Avery earned her 300th win at the helm of the Crusader volleyball program in Valpo’s victory at Green Bay in the league opener on Friday.  Avery is by far the Crusaders’ all-time leader in victories, as the second-most career wins by a Valpo volleyball coach is 92 wins.

Unlucky 13: Valparaiso saw its winning streak, which dated back to the third match of the season, snapped in the five-set loss at Milwaukee on Saturday.  The streak concluded at 13 straight wins, matching the 2008 team for the second-longest winning streak in program history.  The 2004 squad’s streak of 14 consecutive victories remains the program’s standard.

Best Start: The Crusader volleyball team had never gone as deep into a season before sustaining its second loss as they did this season, winning 14 of its first 15 matches before suffering the loss at Milwaukee on Saturday.  This also marks the most wins Valpo has had in a season before losing for the third time (14-2), as the 2010 squad previously held the best mark at 13-2 before losing its third match.

Not Going Down Easy: While the Crusaders lost at Milwaukee, they rallied back from down two sets to force a fifth set.  Both of Valpo’s losses this season have seen the Crusaders take their opponents the distance.  In fact, going back to last year, over Valpo’s last 32 matches, it has lost just six times, and five of those losses have gone a full five sets.

Continued League Success: Since joining the Horizon League prior to the 2007 campaign, the Crusaders have been very successful in league play and are looking to continue that success this season.  Valpo owns a 72-36 (.667) mark in league play over the last seven years and has finished above .500 in all seven seasons.  Four times, the Crusaders have finished in second place in the league standings and have never finished below fourth place.

Trio of Titles: Capturing the Crusader Crossroads of America Classic last weekend gave Valpo a third consecutive in-season tournament title and continued a tradition of picking up hardware early in the season.  The triumph was Valpo’s 20th tournament victory in the 13-year tenure of head coach Carin Avery.  The Crusaders have now brought home at least one in-season championship in 10 of the last 13 years, and have captured multiple titles in seven of those seasons.  This year’s three titles match the 2006 and 2010 teams for most championships in a single season.

Spread Around the Honors: Freshman Allison Ketcham claimed Tournament MVP honors in Valpo’s home tournament victory and was joined on the All-Tournament Team by seniors Morgan Beil and Kelsey Victor, continuing the run of honors for the Crusaders at early-season tournaments.  Seven different Crusaders have earned All-Tournament accolades this year, four of them receiving multiple awards.  Ketcham joins Kelsey Berrington (Jackrabbit Invitational) and Emily Campbell (Skyhawk Invitational) as Valpo players who have been tournament MVPs this season.